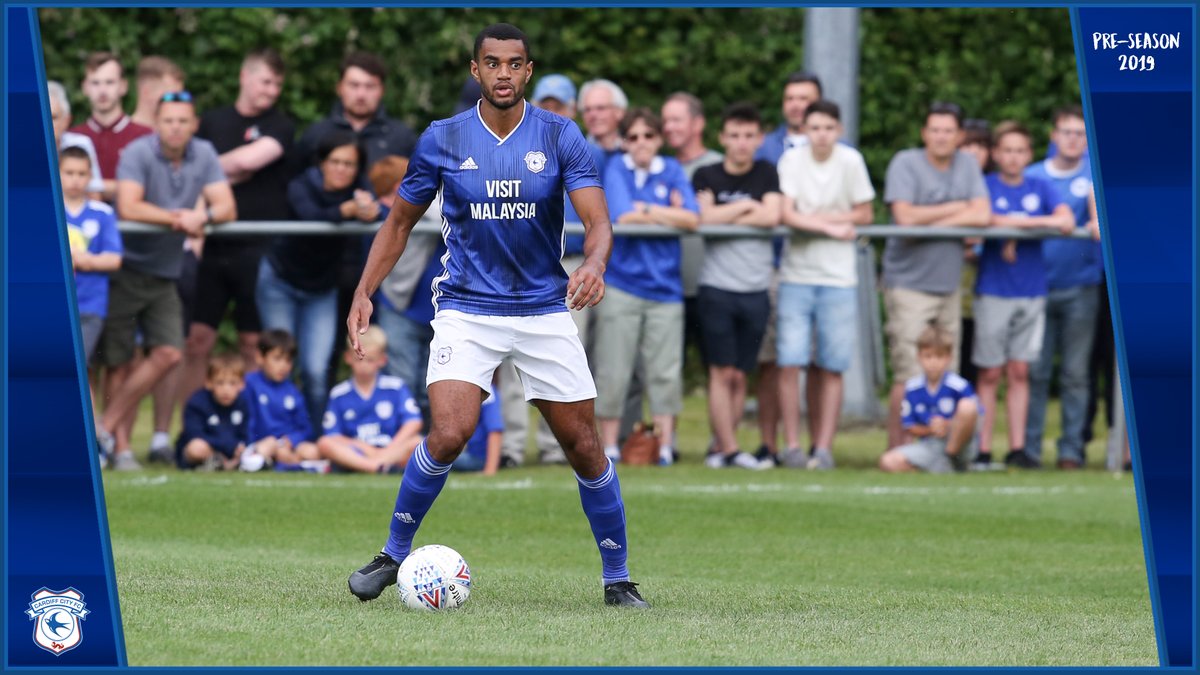 The Bluebirds visited FAW Championship South club Taffs Well for their opening pre-season match and 2,500 spectators turned out at the Rhiw’r Ddar ground.

Cardiff City included new signings Curtis Nelson and goalkeeper Joe Day in their team and used 22 players over the 90 minutes.

Nelson, a composed defender who looks comfortable with the ball at his feet, played alongside captain Ciaron Brown at the heart of defence,

“Both are really good people off the pitch and spoke well to the other players before going out. They also performed really well.

“Taz (Ntazana Mayembe) scored, could have had a second and set up our fifth goal. He looked sharp and quick.”

Moore ran, chased and harried opposing defenders and was willing to go for goal when ever he saw the chance.

Sang, whose father Neil, now a football agent, played for Everton, Torquay, Caernarfon and Bangor City, is on trial with City and was among six substitutes sent on after half-time.

Manager Neil Warnock and his first team players attended the match, while Andy Legg was in charge of the young Bluebirds against the Wellmen.

Warnock and his City squad all spent a long time signing autographs and posing for photographs, while the manager addressed the crowd before kick-off.

All proceeds from the fixture will go towards supporting Tŷ Hafan, a paediatric palliative care charity that offers care to children and support for their families.

The Bluebirds led 2-1 at half-time thanks to goals from Jake Evans (penalty) and Laurence Wootton.

Evans slotted home from the spot after 20 minutes after James Waite was fouled, while Wootton finished a flowing move started by Waite. The tenacious and tricky midfield player whipped the ball out to the right and when the cross flew into the penalty area Wootton was there to finish.

Waite almost scored after another highly effective passing move by Cardiff when he burst clear only for his shot to be saved by goalkeeper Tom Bodger.

Taffs Well scored when former Bluebirds’ youth player Kieron Proctor took a corner from the left and Richard French volleyed fiercely into the corner from 15 yards.

It was a superb strike by French, but he was gifted the chance top shoot by poor marking and an accurate delivery from the corner.

Griffiths scored Cardiff’s third goal from a right-wing cross after 66 minutes, while Mayembe added the fourth when Griffiths sent him running clear. Mayembe rounded the goalkeeper before firing low into the net from an angle as a defender tried desperately to get back and cover.

Moments later Mayembe went close when he ran clear again and fired over the bar.

Goalkeeper Hall saved in style from a Proctor free-kick which dipped over the defensive wall. Hall flew to his right and turned the ball over one-handed.

Connor Davies completed the scoring, making it 5-1 with a tap-in after Mayembe set him up.”

Cardiff City’s U23 and U18 teams have confirmed their pre-season schedules ahead of their respective 2019/20 Professional Development League Two South campaigns.

City’s Under-23 side will face an additional six opponents on top of their tour to Devon and Cornwall. Five of those will be played away, with visits to English teams Larkhall Athletic and Stoke City Under-23, as well as Welsh clubs Trefelin BGC, Haverfordwest County and Penybont.

Times and dates for the U23 pre-season fixtures:

Meanwhile, a training camp in Slovenia lies ahead for the Bluebirds U18 side, who will play one game on tour against NK Radomlje U19, before facing two fixtures in one day at Leicester City against the hosts’ U18 side and Blackpool.

On Tuesday, July 23rd, Cardiff City U18 will host Bournemouth U18, before travelling to compete against Westfields FC of the Hellenic League Premier Division – four days later and concluding pre-season with an away match to Southampton U18 on Friday, August 2nd.

Times and dates for the U18 pre-season tour and fixtures: