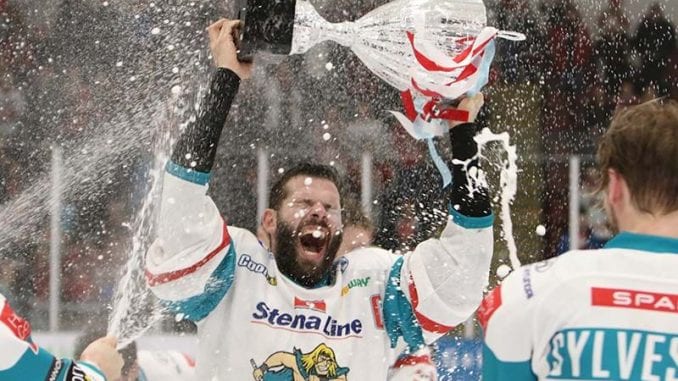 Cardiff Devils owners are holding their annual summit in Calgary, Canada – and they have revealed five signings for the Elite League play-offs champions.

Former Belfast Giants captain Blair Riley, who led that team to the League title last season, has committed to Devils along with Finnish forward Masi Marjamaki.

Stephen Dixon, Matthew Myers and Matt Pope are all returning to Cardiff for the new season.

“Four years ago, before he moved to the UK, I was told by an NHL assistant coach that Blair was a player we should sign.”

A huge new signing for Cardiff. He was captain of Belfast Giants last season and broke Devils hearts when he led his team to the Elite League title.

Canadian Riley and his Giants finished level on points with Devils and were crowned champions on a countback. Both Giants and Devils were 22 points clear of the team in third.

The forward from Kamloops was in the middle of a two-year contract with Belfast, but there was a clause allowing either to terminate at the midway point.

Riley says: “To clarify – I fulfilled the obligations of my contract. Both parties had an option to terminate the second year of the deal once the season had ended.”

He has left Belfast after three years in Northern Ireland, having scored 88 goals and 230 points in 211 games across the Elite League, Challenge Cup and Continental Cup.

Giants won two Challenge Cups and a league title with Riley in their team. He was captain in the last two seasons.

Riley could be a contender to be Devils’ captain next season.

Left-winger who has played for NHL clubs Boston Bruins and New York Islanders.

The 6ft 2ins Finnish forward was originally drafted by Boston 66th overall in 2003 and by Islanders two years later and made his NHL debut against Philadelphia Flyers.

That proved to be his lone appearance at the top level.

Marjamaki, a gritty, physical player, is a quality stickhandler who made more than 150 American League appearances for Bridgeport Sound Tigers.

He returned to Finland where he played for Ässät, Tappara, KHL club Jokerit and Swedish team Almtuna IS.

He is from the city of Pori on the West Coast of Finland.

Devils fans will be ecstatic with the return of the key forward, a two-way centreman who returns for a second season.

Prior to his time in Germany, Dixon spent eight seasons in some of Europe’s top leagues including – KHL (2 years), Finland’s top league (4 years) and the Swedish Elite League (2 years).

He represented Canada on the International stage in four separate tournaments under-17, under-18 and twice at under-20.

Lord’s view on. Dixon: “A great skater, which he would need to be to stick in leagues like the KHL, Finnish Elite or Swedish Elite Leagues and a proven winner.”

A shining light for Devils and Great Britain. Closing in on a landmark 1,000 Elite League appearances with and Nottingham.

Welsh forward Myers is returning for a 10th season with his home city club.

Enjoyed an outstanding 2018-19 season for Devils and GB.

Canadian winger returning for a third season playing for Devils.

Came to Wales after a season in Asia with Tohoku Free Blades where he led the top league in scoring with 33 goals and 35 assists for 68 points in 46 games.

Pope played four years at Bemidji State University and then turned pro with the Bakersfield Condors in 2008-09, scoring 63 points (30 goals, 33 assists) in 54 games.

He then spent the next four seasons splitting time between the American League and the East Coast League before moving to Denmark to join the Aalborg Pirates and Bolzano a year later followed by Valpellice and Bolzano.

“Matt is a power forward who wins battles all over the ice,” says coach Lord. “He can score, make plays or grind it out in the corners. I see him as a real complete player.”