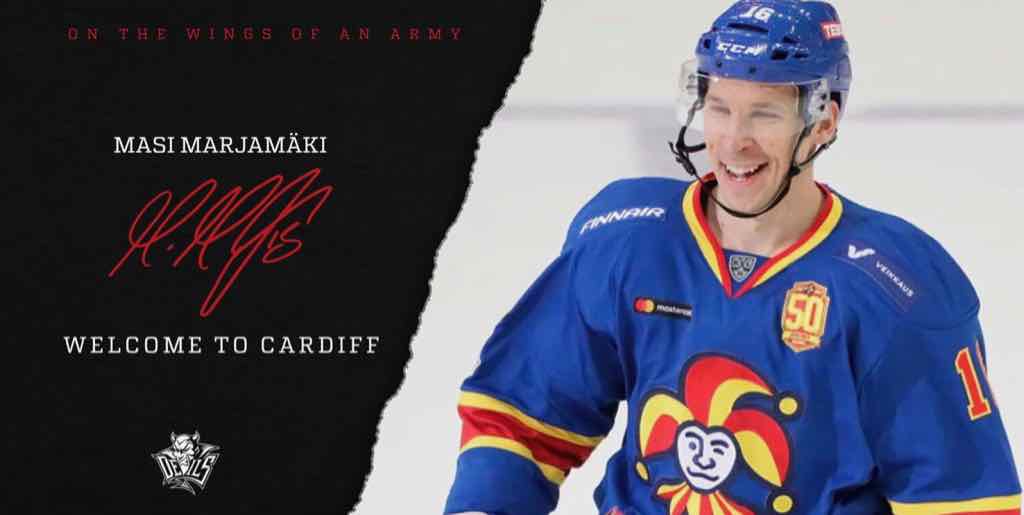 Stephen Dixon, Cardiff Devils’ players player of the season in 2018-19, has played his part in recruitment for the new season.

Canadian Dixon is back for a second season in Cardiff and recommended Finnish forward Masi Marjamaki to head coach Andrew Lord.

Marjamaki is one of three new signings for Devils, along with Mike McNamee and Blair Riley.

Marjamaki and Dixon played together for Tappara in Finland and Devils head coach Andrew Lord says: “We have loads of faith in Dicko and how he plays. He recommended Masi, who is a similar style of player.

“He has a great engine on him, skates well and is a workhorse who finishes his checks.

“Masi loves going to the net and into dirty areas. He plays a great game overall.”

“He’s a great guy,” says Lord. “The reports on him as a guy were fantastic and, having met him face-to-face, they were spot on. A team first player.

“I’m really excited about signing both Masi and Mike McNamee. Both are signings a little bit under cover.

“Masi is looking forward to going at it and try to win his first professional Championship. He has good speed, is a tall player and decent on face-offs.

“The really exciting part of his game is skating through open ice, while he has great vision, stick skills. His overall offensive ability is through the roof.”

Marjamaki is a left-winger who has played for NHL clubs Boston Bruins and New York Islanders. He was originally a second round NHL draft pick by Boston 66th overall in 2003 and by Islanders two years later.

He returned to Finland where he played for Ässät, Tappara, KHL club Jokerit and Swedish team Almtuna IS.

Big-hitting forward Saku, now aged 41, is from Hattula in Southern Finland. He played 82 matches for Devils between 1998 and 2000.

Playmaking centre who, like Marjamaki, is from Pori in Western Finland. Tahtinen its now aged 41 and retired from playing two years ago.

Tahtinen arrived in Cardiff after a 3,000-plus miles journey from Kazakhstan where he had been playing for Arystan Temirtau.

Joined the under-18 set-up at Tampere-based Tappara in 2007 aged 16. Played  36 times in Finland’s top professional league.

American D-man who played 12 matches for Devils last season before leaving to sign for Finnish club Tappara. Made 37 appearances for his new club and will play for them again next season.