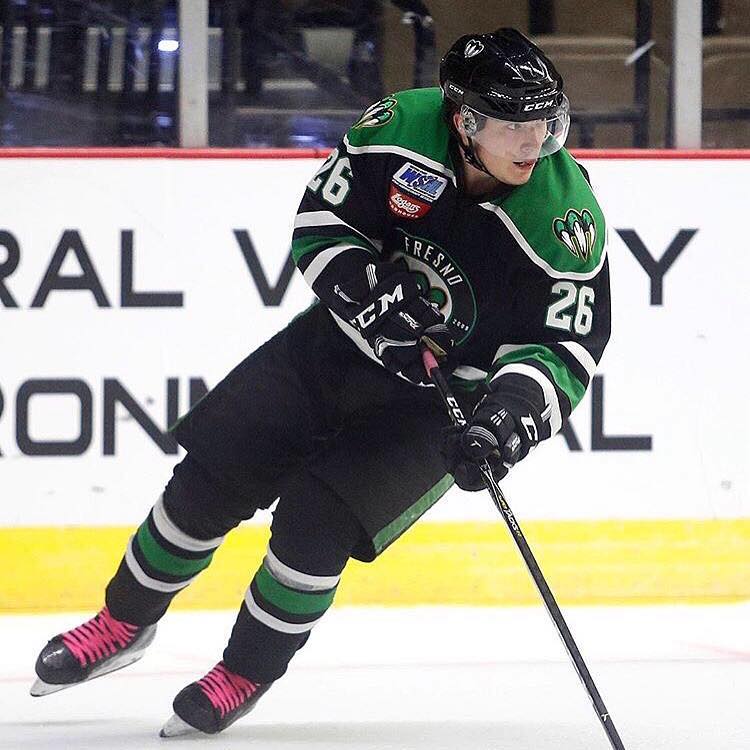 Deakan Fielder in action for Fresno.

The Telford native started his hockey career in his home town, following in the footsteps of his Father David.

“Deakan has had a few skates with us and also with the Devils a few times through the summer,” says Fire coach Mark Cuddihy.

“He has massive potential and that has been recognised by him playing GB 20’s as a first year.

“He sees the ice and moves the puck well and that’s exactly what we need. Deaks is an offensive D-man who carries the puck extremely well, a big guy, too, so the physical side of senior hockey will not phase him.

“I am really excited for Deakan to get going in Cardiff. Fire fans are going to love him.”

“Last season I was in North America playing in Fresno and it was such an experience, where I was able to not only play fast, physical hockey but learn what it takes to be a professional,” says Fielder.

“However, I couldn’t pass up the opportunity to play for Fire and train around some of the best players in the country with the Devils.

“This is the best place for my development and in a few years after gaining experience I would love to make that step up to the Elite League. I can’t wait to join the guys at the end of the month and get the season going.”

In 2015 Fielder made the move down south to join the Okanagan Hockey UK in Swindon where he stayed for three years.

During his first season in OHA he put up decent stats as a 15-year-old playing under-18 hockey, scoring four times with eight assists in 20 games and was called up to play for GB U16’s in Madrid.

During the following two seasons in OHA, Fielder enjoyed more success. He played up for Swindon Wildcats in the English Premier League and also NIHL teams.

in six games for the NIHL team Fielder was a point a game with three goals and three assist.

Deakan was appointed captain in his final season at OHA, playing in 20 games. He scored 10 goals and added 11 assists.

After finishing his Under-18 career in the OHA, Fielder made the move to North America to play for the Fresno Monsters in the Western States Hockey League.

He had a good season in the states, picking up 17 points in 43 games (4+13) and earning him a call-up to the GB Under-20’s team as a first year playing alongside NHL draft pick Liam Kirk.

Fielder, who will wear the number 12 jersey for Fire, was not short of offers this summer, but decided to join Cardiff for his own development and the opportunities that will come his way from being in Cardiff, putting his head down and working hard.

He has played all age groups in Cardiff and has been a big points producer. Since under 15’s Lloyd has scored 114 goals and assisted 54 times in 76 games.

Lloyd first stepped up to the Fire team as a 16-year-old, playing four games for the Division One team and 11 in Division Two, scoring 13 points in 11 games during his first season.

“Carter has had some real bad luck with injuries over the last few seasons,” says Cuddihy. “But this summer his recovery has been going extremely well and we’re hoping that these injuries are behind him and Carter can have a break out year in senior hockey.

“He’s incredibly quick and skilled and there is no doubt he knows where the net is. Carter is keen to develop and takes hockey seriously.

“If he can stay injury free I have no doubt Carter will be an exciting player for us this season.

“I would love to see Carter step into the GB 20’s set up over the next two years and if he keeps going the way he is and gets some luck I am sure he can make it.”

Great Britain U-18 goalie Davies singed for Fire as a 17-year-old and will now play in his third consecutive season for the Fire.

He traveled as part of the GB team to South Korea in 2017 and won a gold medal for GB Under 18’s in Estonia the following year.

Whiting joined Cardiff Fire in our first season, splitting his time with Cardiff Under 20’s.

In his junior career James played for South West and England. He has won three trophies in Cardiff – the national championships with Cardiff U-18 and two with Cardiff Fire.