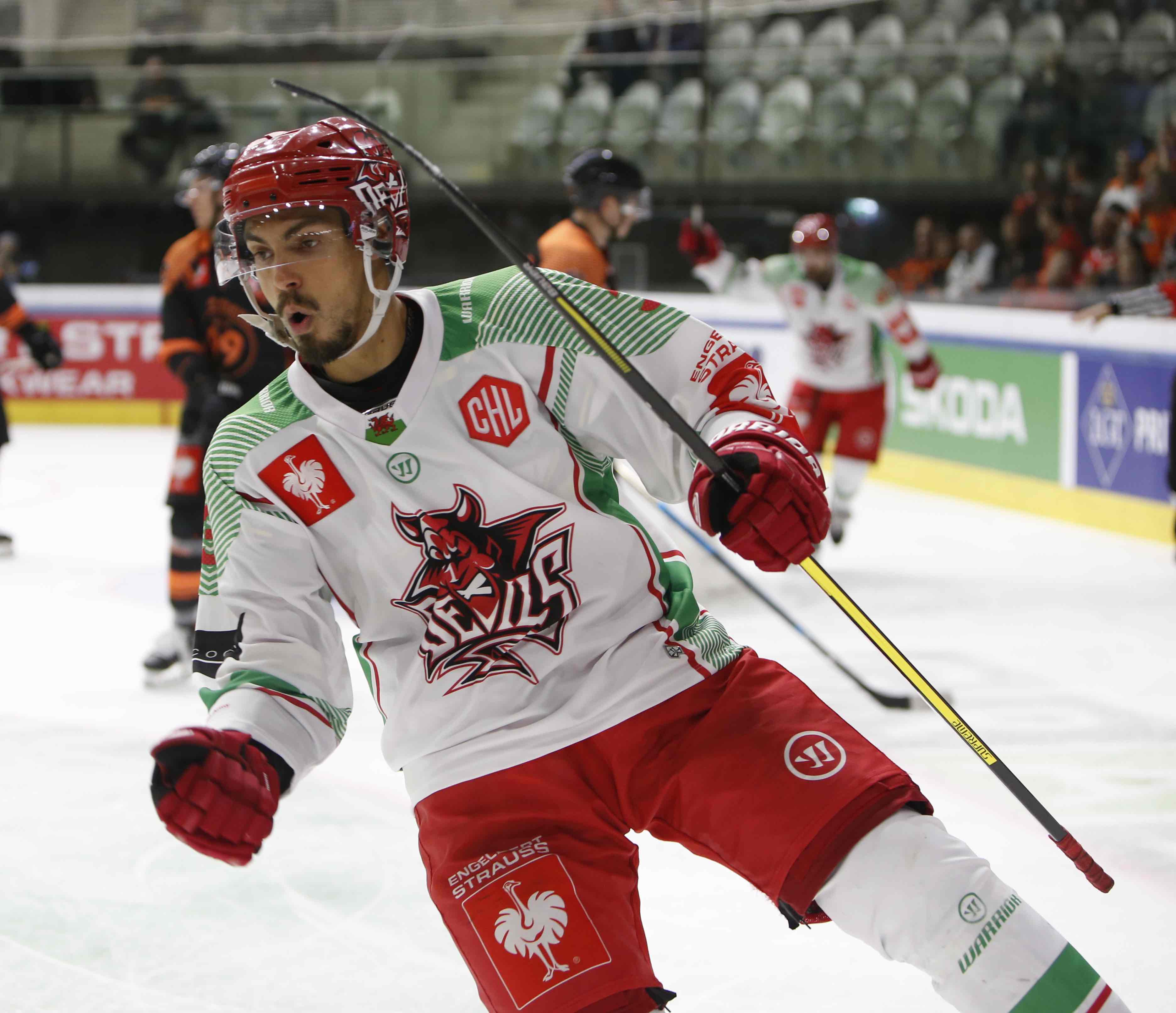 Dai Sport has been in Europe with Cardiff Devils. Ice hockey journalist Terry Phillips travelled for Champions Hockey League matches in the Czech Republic and Austria – and was among more than 250 Devils fans for the away win at Graz 99ers. After the match against Mountfield in Hradec Králové, owners Steve King and Brian Parker gave us an exclusive interview in the SkyBox hospitality suite at the CPP Arena.

Cardiff Devils’ owners – Steve King and his fellow Canadians from Calgary – are planning far into the future with the Elite League play-off champions.

They have Devils’ projects going forward 20 years – and are keen to see EIHL ice hockey match the standards currently set by Germany’s DEL and Switzerland over the next decade.

Owners King and close pal Brian Parker revealed plans for Devils to buy club apartments over the next decade to avoid increasing rents. That process is set to start in the next year or so and those club apartments will be long-term club assets.

The two men from Calgary were joined by family, friends and more than 250 Devils fans in Europe for matches against Mountfield HK and Graz 99ers.

Cardiff were edged out 5-2 against Mountfield in the Czech Republic and then powered to a convincing 5-2 win at Graz which lifted them top of the group above reigning Champions Hockey League title holders Frolunda Indians.

There are two Devils group matches to play – both against Indians.

King, Parker and their travelling companions mixed with Devils fans at both matches and hosted a question and answer session in Graz.

Parker hosted a ‘booze cruise’ on the river in Hradec Králové, while former Devils player Neil Francis and Devils managing director Todd Kelman had a race on powered scooters.

There was plenty of socialising among Devils fans and the King/Parker group, while head coach Andrew Lord and his players were focused on their two matches.

Cardiff have played CHL hockey for three successive seasons and have undoubtedly made massive progress, underlined by their five-goal victory at Graz – their first ever Champions League away win.

King, Parker and the fans were ecstatic. Celebrations went on late into the night after their win in Graz, a club who must be among the friendliest in Europe. Their welcome for Cardiff was exceptional.

Phillips sat with King and Parker for 20 minutes – and they outlined their thoughts and wishes for Devils.

It’s back to back home games

It’s back in black Saturday vs @flamesicehockey

It’s banner raising on Sunday vs @ClanIHC with a very special guest!

It’s a weekend that can’t be missed

Question One – TP to Steve King: What are your thoughts on the Cardiff Devils team for 2019-20?

Answer – SK: ‘Lordo told us that moving forward we needed a team who were younger, faster, more physical and more entertaining.

We kept a solid core of returning players, while all five of the new guys fit that bill. Watching pre-season, while I know some fans had questions about some matches, it’s not about wins and losses at that point.

At that time it was about getting the team together and figuring out how they need to play. We’ve seen in CHL games exactly the way we are playing. We are faster, more physical and we can move the puck better than we ever have

I am really excited about the new guys.’

Question Two – TP to Steve King: The League title chase looks certain to be an absolute cracker this season. How do you feel about the campaign ahead?

Answer – SK: ‘It is unbelievable the way EIHL has improved as a whole. The number of players we had reach out to us was remarkable. Many agents contacted Devils and that is a real testament not just to Cardiff, but the whole league.

Agents know this is a great league to play in and players we never would have dreamed of three years ago contacted us and every other EIHL team.

Question Three – TP to Steve King: Reflect on the last five years since you came to Cardiff. Devils have won League titles, play-offs, Challenge Cups and Conference titles. Your thoughts?

Answer – SK: ‘It’s been amazing how far we have come, but the exciting thing for me is where it can eventually go.

Canadian and American players in the main prefer to play in an English-speaking. We have more relaxed import rules, it’s a really good league to play in and the cities in EIHL are World class.

I am so excited about that prospect. Okay, we need more revenue to be quite honest. Given the revenue teams in our league have, we have to address that issue.

There is a need for league-wide sponsors and television deals. The next five to 10 years are about catching up. It’s nice to play in an English-speaking country, but money talks.

“We can’t compete financially right now with the DEL, Switzerland and more, but there is no reason why we can’t in the future.’

Question Four – TP to Steve King: Tell me about your relationship with Devils fans?

Answer – SK: ‘We love our fans so much. The guys and girls we were with in the stand at Mountfield and Graz are some of our best fans and they support the team with all their hearts. They scream and yell the entire time, spending their hard-earned money to travel and support the team.

Personally, I can’t thank them enough, but we are going to need more from them at the Viola arena.

We as owners are going to step up this year and start buying apartments for our players, making further investment into this club. In order to do that we need fans to keep on coming out for their team and encourage friends to try the experience.

Currently, we rent apartments, but costs are going up. To try and control costs we are going to buy club apartments, make them long term assets and a legacy for the club.’

Question Four – TP to Brian Parker: How do you rate this Cardiff Devils team and EIHL hockey this season?

Answer: BP: ‘We went for speed, more physicality and you could see we were getting better and better through the pre-season. It’s an exciting team to watch – fun and fast.

This is the best team we have had in Cardiff over the last five years, but the entire league – every club – are getting better.

Look around – Sheffield have a good team, Belfast look great, Nottingham have recruited well. Glasgow and Guildford have added good guys. We could talk about all 10 teams.

You can’t discount any of them now. They are all excellent.’

Question Five – TP to Brian Parker: Are the owners as enthusiastic now as you were five years ago?

‘Oh yes. This season, maybe in part because we took a half step back when we didn’t win the league title, were have renewed excitement about 2019-20.

Enthusiasm levels, if anything, have gone up.

Steve and I talk about Devils on the phone every day and we have done that for five years. We do business together, but by far we talk about Cardiff Devils more than we do about business.

This club is such a fun part of our lives, especially at this time of the year when we kind of get to have an inner look at the players the club are looking at, who they are trying to sign, and seeing them start to gell together and play together.

That is so much fun. Excellent, awesome.’

Question Six – TP to Brian Parker: Is the Devils’ recruitment style unique? Andrew Lord is helped by the owners, Neil Francis and managing director Todd Kelman in the search for talent?

Answer – BP: ‘Lordo and Todd have done a great job in developing a network of trust among players. That’s the biggest thing. We have a few other tentacles out in Canada because we know hockey guys and throw them into the mix.

There are no secrets in hockey. Players will phone the friend of a friend and find out about their experience at a certain club, how you are treated as a player and how the fans treat you.

Does the team pay wages on time? Do they put players in a nice house? Is there good fan support. Is everything off the ice taken care of, are family issues taken care of. We pride ourselves on all of those points.

Another factor is that Lordo has such a positive winning attitude, guys love to play for him.

All of those factors help throw better and better players into mix. You need that tight gell of treating players properly and fighting to win all the time. That’s what guys want to be part of.’

Question Seven – TP to Brian Parker: Evan Mosey was injured playing for Great Britain and Devils have stuck. That’s fantastic for Evan and the club’s reputation. What are your thoughts?

Answer – BP: ‘Firstly, he’s a quality guy. We treat players as if they were our family. If a member of your family are injured you look after them.

We have always done that ands are never gonna cut a guy mid-season after an injury.

#TravelTuesday If you’re heading to Cardiff this weekend to see the @cardiffdevils play at @TheViolaArena you should watch this video of #VisitCardiff taking the newest members of the Devils on a tour of #Cardiff for some travel inspiration.https://t.co/E4qejxwfXs

Question Eight – TP to Brian Parker: More than 250 Devils fans followed the team to Mountfield and Graz. It was phenomenal to be among them. How do you feel about that passion?

Answer – BP:  ‘I love it. It’s great hanging out with Devils supporters. We’ve gone from seeing familiar faces to developing friendships, seeing these guys time and again. Personally, I love seeing them on the road. We share a comm on passion for our team. It’s fantastic.’

Love it. Love hanging out with these guys. It’s gone from seeing familiar faces to developing friendships, to see these guys time and again. We love seeing them, particularly on the road. We share a common passion for the team.’

Devils start their domestic fixtures this weekend with back-to-back home matches. Guildford Flames are visitors for a Challenge Cup group match on Saturday (7pm), followed by Glasgow Clan in an Elite League clash on Sunday (6pm).

Both fixtures are at the Viola Arena in Cardiff Bay.