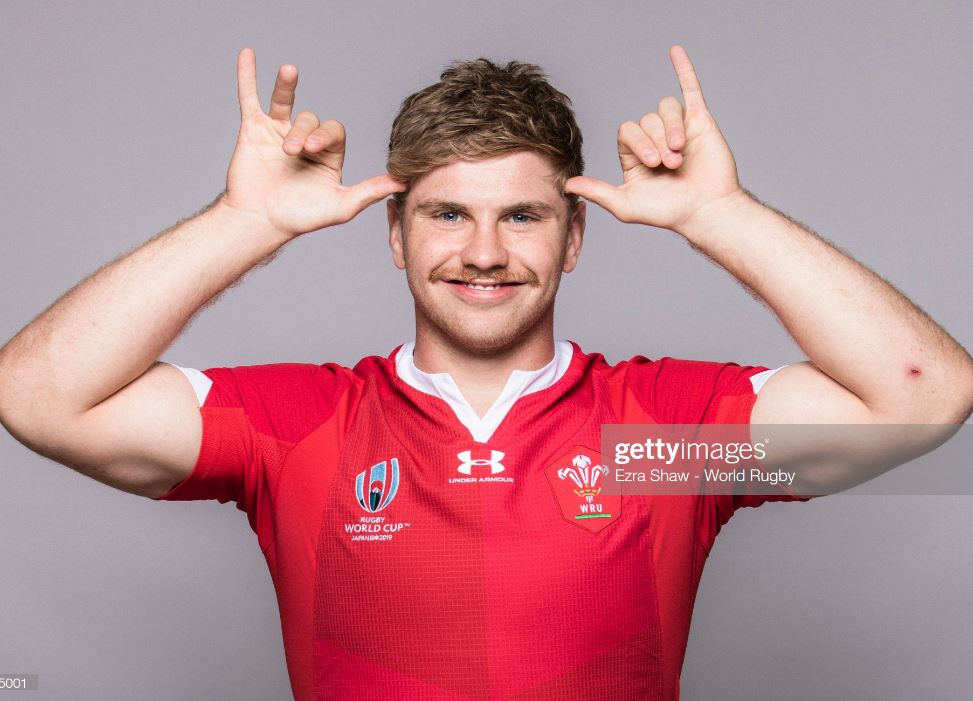 Aaron Wainwright has won a Grand Slam and is now preparing to play for Wales against South Africa at the Rugby World Cup. Pic: Getty Images.

Welsh flanker Aaron Wainwright, nicknamed Aaron ‘The Smash’ from his early days in rugby union, is one of the success stories of the World Cup in Japan and looks certain to play for Wales against South Africa on Sunday. Terry Phillips chatted to Cardiff City’s Academy manager about Aaron’s Bluebirds’ past

There will be a huge amount of affection and support from Bluebirds fans plus Cardiff City footballers and coaches past and present when Aaron Wainwright runs out with Wales in Yokohama on Sunday.

The 6ft 2ins flanker from Newport, who celebrated his 22nd birthday last month, is being celebrated around the World after a top notch display during Wales’ quarter-final win against France.

He is in the Welsh team for their semi-final against South Africa in Yokohama on Sunday and the winners play England in the final next weekend.

And yet, only five years ago, Wainwright had scarcely played any rugby at all and his focus was on playing first team football for Cardiff City, having come through the Risca mini-football programme.

Cardiff City Youth Academy manager James McCarthy worked with Wainwright and says: “Aaron was with our Academy for a good few years and I started working with him at under-15 and under-16 levels.

Interview above by DRRE as part of a student production at the University of Gloucestershire.

“He was, and still is, an extremely good athlete with a good attitude. He applied himself to everything asked of him and worked really hard.

“In the end he fell a little bit short of being offered scholarship terms.

“Aaron is a great kid who was well liked among his fellow Academy players and coaches. He was never a moment’s trouble to anybody and we are all thrilled to see him succeeding for Wales at the World Cup.

“Personally, I’ve been watching his progress with great interest. Since he turned to rugby union his rise has been meteoric.

“It’s been great to watch him play for Wales with such success and how we would all love to see Aaron help Wales do the business against South Africa.”

Before the age of 17, Wainwright was totally devoted to football, playing alongside Regan Poole at the City Academy, and McCarthy says: “Aaron was predominantly a midfield player and technically extremely gifted.

“He had a good range of passing.

“The main factor which let him down in the final analysis was the athletic ability needed to play in midfield and being able to get around the pitch at speed in football.

“He certainly has athletic ability and that has shone through since he started playing rugby union where his build is a massive plus.

“Aaron went on the Newport County after leaving Cardiff City and then he turned to rugby union.”

His favourite player was Arsenal’s Patrick Viera, who made more than 100 international appearances for France.

When Vieira played for France in their 1998 World Cup win, Wainwright was only nine-months-old, but he met his idol at the age of 14.

“Viera coached me when he was in Wales taking coaching badges,” he said. “We had two or three days at the University of Glamorgan playing fields with Wales under-16s.

“I was in the squad, but didn’t play a cap game for them and some of the retired pros were doing their coaching badges. We had players like David Ginola and Patrick Vieira taking sessions.

“Vieira took one of the sessions for midfield players. He was a role model for me and that was a great experience.

“I was young, around 14, really nervous and a bit starstruck watching him giving me tips and tactics.

“I was just trying to take everything in. It was one of the best footballing memories I have.”

Wainwright worked to mould his game on Viera plus Chelsea, Real Madrid and France player Claude Makélélé, saying: “Football started for me at seven-years-old.

“I was picked up by Cardiff City for their development team and played to 16s. I was a central defensive midfielder, protecting things in front of the back four.

“At the age of 16 I was told Cardiff were not going to offer me anything. It was a shock because I had been playing at their Academy for seven or eight years.

“It was gutting in a sense to be told I wasn’t going to be offered anything after being with Cardiff City for so long. I didn’t know whether to cry. I felt sad and just walked off.”

Wainwright moved to Newport County and after five months he was he was offered a scholarship.

“I would have had to move school and didn’t want to,” he said. “I wanted to stick where I was, to do my A Levels and be with my friends. That’s when I got into rugby.

“I had gone to odd rugby sessions when I was younger, but didn’t play until Year 11. Football was coming to an end for me, the boys at school played and a teacher said ‘Come down for a game’.

“The boys at school also played for Whitehead Steelers so I went there.”

Wainwright, whose dad played for Caerphilly RFC and Wales under-21s, started playing prop and then switched to the back-row.

He wanted to study at university and signed up for sports science at Cardiff Met system with a thought that he might play for Newport RFC at some stage.

His studies meant there was no time for a job, although he had worked as a paper boy, at a call centre and in retail before going to the Met.

Now, of course, he has no need for part-time jobs, but loves to put something back into grassroots rugby and coaches at Whitehead Steelers when possible.

When Wainwright first turned to rugby union and popped down to Whitehead he quickly earned a new nickname – Aaron ‘The Smash’.

“Every time he picked up the ball and ran he smashed through at least three or four people before he was tackled,” said a club coach.

On Sunday morning ‘The Smash’ will be focused on Wales’ South African opposition in Japan.