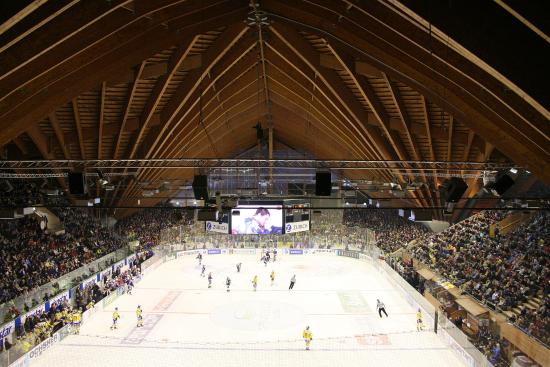 The Vaillant Arena, Davos, Switzerland, home of the Spengler Cup.

Blair Riley, Cardiff Devils powerful, high end forward, has been called up by Team Canada for their Spengler Cup challenge over the festive period.

Lord made his move to sign Riley and the former Belfast captain came to Wales for this season.

His inclusion for Team Canada means Riley will miss at least four Devils matches, but head coach Andrew Lord does have an extra import in his squad and can still operate with a full complement.

Riley has been playing alongside Sean Bentivoglio and captain Joey Martin, while the versatile Bryce Reddick sat out wins against Belfast Giants (4-2) and Manchester Storm (3-2) last weekend.

He is in a Canadian squad of 22 players who will wear the Maple Leaf at the Spengler Cup in Davos, Switzerland.

“We are excited about this group; we believe we have assembled a team that combines experience from previous Spengler Cups with a group of new faces who will contribute to our success in Switzerland,” said general manager Sean Burke (Windsor, Ontario/Montreal, NHL).

“The Spengler Cup is an exciting tournament with a rich history, and the opportunity to participate is a highlight of the season for our staff and players.”

They will open the 2019 Spengler Cup against Czech champions HC Ocelari Trinec on Boxing Day, while the tournament ends on New Year’s Eve with all matches at the Vaillant Arena, Davos.

The entire team, staff, owners of the Cardiff Devils are all pumped for @Briles25 for this selection. Thank you @HC_Men for keeping an eye on the @officialEIHL. Good Luck to Blair and all his Team Canada teammates. https://t.co/CWG2KxV1X3

Invited every year since 1984, Team Canada have only failed to make the final twice and are tied with HC Davos for most wins with 15.

The Spengler cup takes place in the middle of the NHL season and as such the Canadian team which enters is mostly full of European based players mixed in with a few college prospects.

Reigning Czech champions. They face a tough group having been drawn with Team Canada and HC Davos, who have 30 Spengler titles between them.

The 91st Spengler Cup edition is getting closer. This was the first Team Canada which participated in Davos (1923). pic.twitter.com/WKFN3JlIHa

Representing the KHL and the city of Ufa. Salavat Yulaev will appear in their fourth Spengler Cup, having competed in 2007, 2012 and 2014. They made the final in two of their three appearances so far, only missing out in 2012.

Historically they competed in the lower divisions in Russia, but have come to greater prominence over the last decade, winning the KHL Championship in 2011 and the regular season championship in 2009 and 2010.

A cult favourite with 17 different fan clubs in their native Switzerland alone, and around 40 Europe-wide.

Since promotion to the top tier of the Swiss league in 1985, Ambri-Piotta have not won the League Championship, but have never suffered relegation either and they are coming off the back of a quarter-final appearance last year.

They represent the neighbouring villages of Ambri and Piotta in southern Switzerland with a combined population of only 500. The other teams in the 2019 Spengler Cup may be bigger, but the passionate support this club enjoys could earn them even more fans during this years tournament.

Their first ever Spengler appearance.

A third Spengler appearance for Finnish club Turku after competing in 2001 and 2002. Founded as a football club in 1922, Turku have played hockey since 1929 and are 10-times Finnish Champions.

They finished fourth in the last campaign and will be hoping to follow the example of KalPa Kuopio who became the first Finnish team to win the Spengler with their 2018 victory.

Unbelievable news for a great player and an even better teammate/person. Congrats Riles https://t.co/HvAaZUMDcS

Six teams split into two groups of three. Davos, Team Canada and Trinec will play in the Cattini group, while Ufa, Turku and Ambri-Piotta compete in the Torriani group.

In each group each team plays each other once with three points for a regulation time win and overtime and a shoot-out determining winners if necessary.

Riley will miss the Devils trip to Guildford on Boxing Day (4pm face-off), the home fixture against the same opposition at Cardiff’s Viola Arena on Saturday, December 28 (7pm), their trip to Coventry Blaze on New Year’s Eve (4.30pm) and Blaze again in. Cardiff Bay on New Year’s Day (4pm).