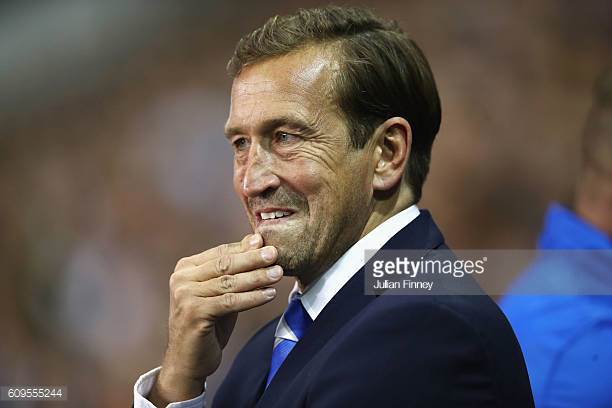 Newport County and Leyton Orient pay tribute to their former manager before they clash in SkyBet League Two action at Rodney Parade this afternoon.

Edinburgh led both clubs to promotion from non-League football into League Two with Newport going up in 2013 and Orient last season before his death in June at the age of 49.

He is to be inducted into County’s hall of fame before kick-off with many of his former players and family members invited to attend.

Flynn spoke about the occasion after Newport’s 1-0 defeat at Exeter, saying: “It means a lot to me. Justin is somebody I have so much respect for.

“I miss him – it’s as simple as that. I’m sure our fans and the Orient supporters will get together that day and do all we can to support the Justin Edinburgh (JE3) foundation.”

Aaron O’Connor, who played for Edinburgh at Grays, Rushden and Newport, says in the official match day magazine: “He was a fantastic man-manager, so I didn’t hesitate in joining him at Newport,” he told the club’s official matchday programme.

“I knew then that by going to Newport, even though I was leaving Luton who were relentless in getting to the play-offs every year, I knew we’d overachieve with Justin as manager.

“I can hand on heart say that if there was any other manager at Newport back then, I 100 per cent wouldn’t have signed for the club.

“That’s no disrespect to Newport but the options I had at the time, including staying with Luton, might have appealed to me more.”

O’Connor revealed that the only time he fell out with Edinburgh was before Newport’s 2013 play-off final against Wrexham.

“That day, in the play-off final, was the only time I ever fell out with Justin. I was gutted I didn’t start the game, but I understood the decision.

“I was fighting fitness and I wasn’t 100 per cent. In a one-off game like a play-off final, I felt like the manager needed me. I was disappointed, I was plodding around in the warm-up and I remember Justin telling me ‘don’t worry, you’ve got a big part to play.’

There will be fundraising for the Justin Edinburgh Foundation before and during the County v Orient match.

Newport head into the clash with Orient following their 1-0 defeat at second-placed Exeter City, losing to a first half Lee Martin goal.

“It came come from our goal-kick, Exeter countered and scored. We tried and tried, but just couldn’t get a goal and couldn’t get back in the game.

“We gave it a go. We have no excuses. Our job is to pick ourselves up and be ready for Orient.

“We must stay together, keep working hard for each other and I’m sure it will turn around.”

“We’ll come in again, be relaxed and ready to go and hopefully we can turn it around.”

The Exiles are back at Rodney Parade for their next two league fixtures, against Orient and Cheltenham (New Year’s Day).

Flynn made two changes to the side which suffered a disappointing defeat at Morecambe and changed formation to 4-1-2-1-2.

One of those changes was enforced after Mark O’Brien suffered a head injury at Morecambe with Ryan Inniss called into defence. Bennett was restored to midfield in place of Matty Dolan.