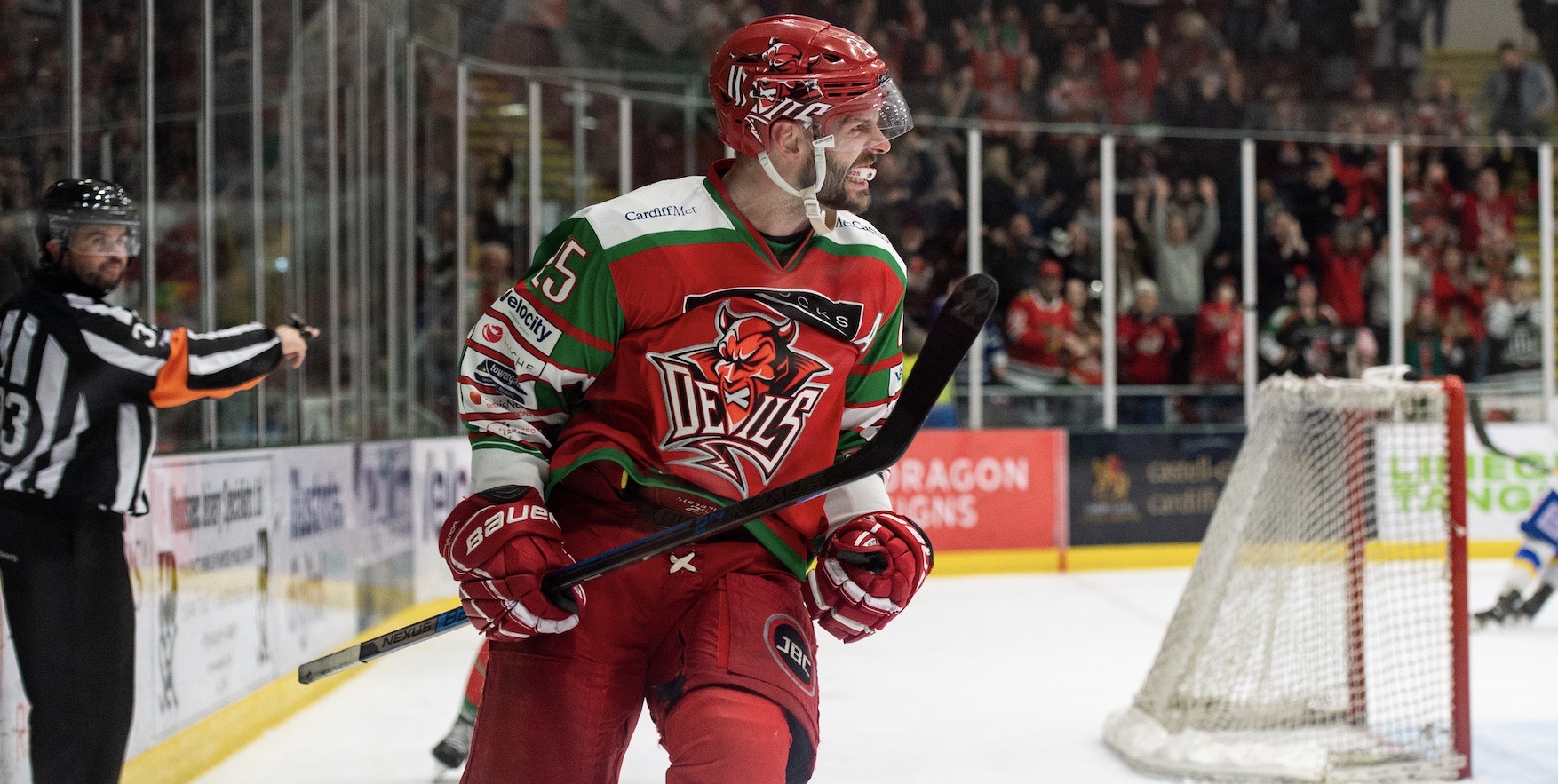 B lair Riley after scoring the winning goal for Cardiff Devils.

Andrew Lord paid tribute to his Cardiff Devils players after their 3-2 Elite League home win against Fife Flyers at the Viola Arena in Cardiff Bay.

Blair Riley scored a last minute winner against Flyers to earn a victory which lifts Devils to within one point of leaders Sheffield Steelers with three games in hand.

“This is the closest group of guys I have ever coached,” said head coach Lord. “That togetherness is everything.

“We’ve put ourselves in a position to hopefully win the Challenge Cup – we have a huge game against Steelers in the final – and we are in the thick of the title chase along with some very good teams.

“It looks like going to the wire. Consistency is the key – the most consistent team will winch trophy. Our job is to eliminate mistakes and play the right way.”

Devils outshot Flyers 52-29 and Canadian goalie Adam Morrison was in sensational form for Fife, but Devils stayed calm and skated to victory, albeit thanks to Riley’s late strike.

“We have eight or nine guys still here since the ownership changed and a core group of 15-16 returning guys,” said Lord. “We’ve been through it in this race a number of times and have experience to draw on.

“There is a will to win, a camaraderie among the guys. You need a close group and I’m proud of the guys

“We kept pushing and found a way.”

Joey Martin, Mark Richardson and Riley scored for Devils and all three came in the final period.

Flyers scored the only goal of the opening period through former Devil Paul Crowder just three minutes into the game and that remained the score going into the final 20 minutes.

Martin levelled the score 16 seconds into the final period when he hammered home a puck poked onto his stick by Evan Mosey.

Then with less than minutes left, Richardson started and finished a passing move. He swapped passes with Masi Marjamaki to put Devils 2-1 ahead at 52-14.

Crowder tipped in his second goal with less than five minutes left to tie it up at 2-2 before Riley struck with the winner 49 seconds from the end.

Captain Martin pulled up just inside the Flyers zone and found Riley, who had plenty of time to fire the game winner past goalie Morrison.

Devils, who rested Charles Linglet and Mark Louis from the match, now turn to a home fixture against Guildford Flames at the Viola Arena one Saturday (7pm).

Man of the match: Mark Richardson