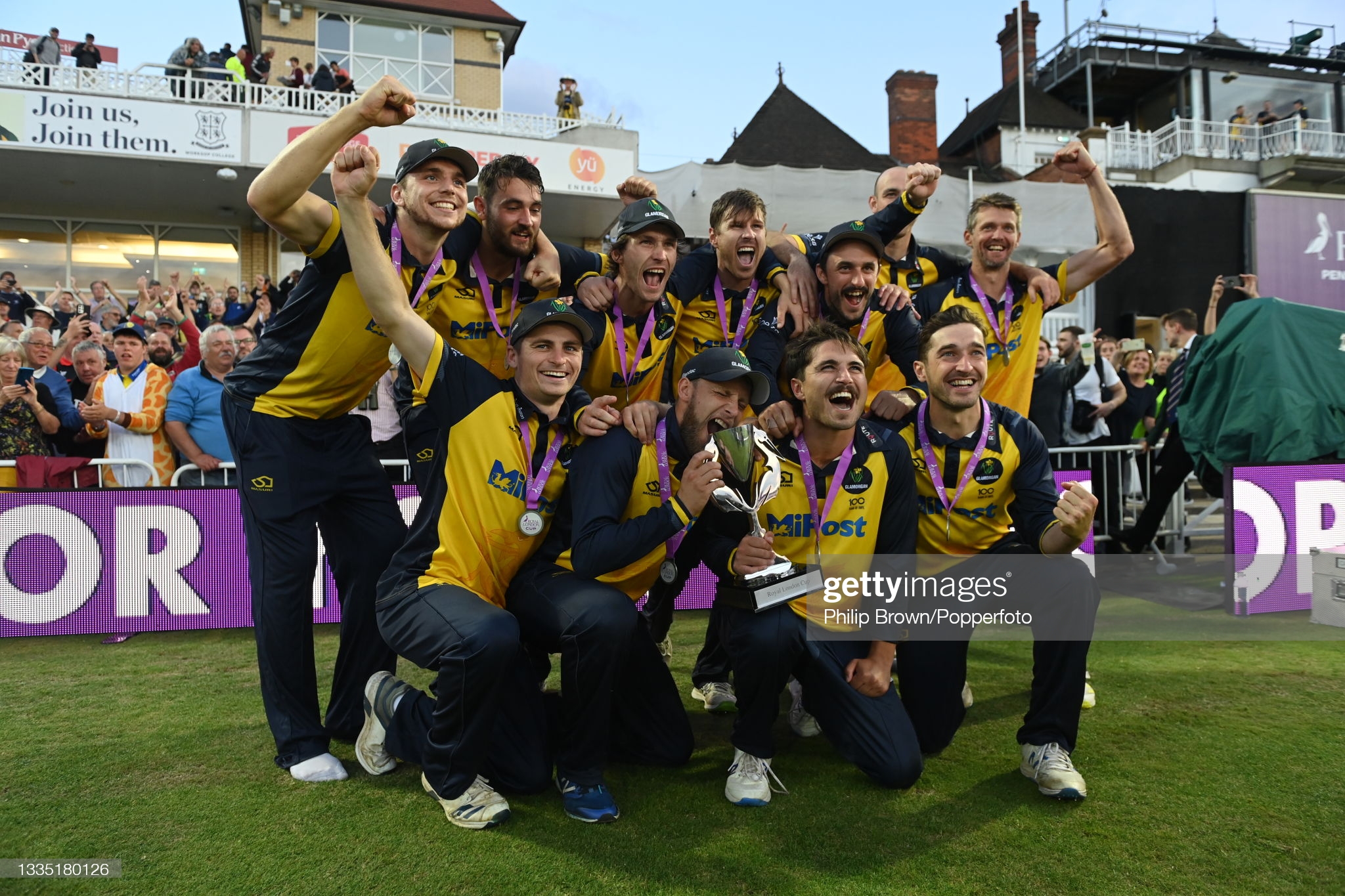 Glamorgan hero Andrew Salter believes the lack of expectation on a young team helped them thrive after the county got their hands on the Royal London Cup by defeating Durham in the Trent Bridge final.

Glamorgan lost batsman Colin Ingram, wicketkeeper Chris Cooke, all-rounders David Lloyd and Dan Douthwaite and seamer Timm van der Gugten to the inaugural edition of The Hundred, but those left behind have stepped up.

Kiran Carlson was appointed one-day captain in the absence of Cooke and Lloyd and he led the way against Durham with a belligerent 82 from 59 balls that helped Glamorgan post a competitive 296 for nine after they lost the toss.

There were some key contributions down the order and Salter followed up his 33 from 22 deliveries by taking three for 42 with his crafty off-spin as Durham were all out for 238 in 45.1 overs to lose by 58 runs.

Glamorgan were therefore left celebrating their first piece of silverware since winning the National League in 2004, while this was their first knockout trophy success in 58 years.

An overjoyed Salter said: “The key thing was there wasn’t that expectation.

“We weren’t playing with the massive pressure of being the frontrunners, we were the underdogs, we lost a lot of key players to The Hundred.

“I suppose that gave us that little bit of freedom to play and to see what we could do. If there’s one thing to take it’s probably not to pile on the pressure or expectation but just trust the boys.

“I’m delighted, it’s just an unbelievable day and (I’m) just a bit overwhelmed. I want to make special mention to Kiran for his captain’s innings and just the way he’s led the boys, we’ve matured under him. It’s exciting times.”

In Graham Clark and Alex Lees, Durham had the two in-form batsmen of the competition, the pair having registered a combined 1,153 runs in eight matches to reach this stage, but both were sent packing by Salter in a crucial period.

He produced a moment of magic to beat the outside edge of Lees before Clark holed out, while Salter had his third top-order wicket when David Bedingham, another key batsman for Durham, was out for a duck.

Salter added: “We definitely knew that they were coming in with good form and good stats behind them. I’m not a massive guy to spend too much time in statistics and looking at players because of that.

“I think we all know how our cricket can differ from day to day, I’ve played against both of those guys a bit, Lees is a power player and so is Clarky.

“I just knew I had to be at the top of my game, I couldn’t give them anything loose for them to pick up their momentum. There was no magic plan.

“I’m trying to build some pressure and dot balls and hope when they take that risk to hit out I’ve got the fielder in the right place and I’ve bowled the right delivery. It worked out here, on other days it ends up 12 rows back.”

Although Glamorgan won the limited-overs leagues in 1993, 2002 and 2004 they had never succeeded in a one-day final, with three runners-up spots at Lord’s.

Alan Jones’ outfit were beaten in the 1977 Gillette Cup final, Matthew Maynard’s side lost the Benson and Hedges Cup final in 2000, while Mark Wallace’s team finished runners-up in the YB40 Cup in 2013.

Captain Carlson said: “It’s brilliant and I’m just so chuffed for all the lads with the hard work they’ve put in which has come to fruition with the trophy, the icing on the cake.

“I was just trying to relax batting. I play my best cricket when I’m relaxed and I was trying to keep my head clear.

“The guys coming in after did a great job. Andrew Salter, Joe Cooke, Michael Hogan and Lukas Carey at the end, those little contributions go such a long way in white ball cricket.

“Hoges [ Michael Hogan] has put in performances the whole year and for him to take the last wicket topped it off – brilliant for him.”

“We were missing five guys due to The Hundred and the guys who’ve stepped up have been unbelievable.

“To do so against some really strong teams in the last couple of games has been so good to see. They’ve put their hands up for other formats of cricket.”

Durham lurched from 47 without loss to 74 for four, largely as a consequence of Salter putting the squeeze on, before Cameron Bancroft and Sean Dickson kept the north-east side afloat with half-centuries.

While Bancroft contributed 55, Dickson was ultimately left with too much to do and ran out of partners at the end, stranded on 84 not out from 83 deliveries, a fine innings containing eight fours and Durham’s only six.

Dickson said: “When it comes to finals cricket there’s always a big element of pressure. A lot of players make their own pressure and unfortunately it just didn’t fall our way.

“We can’t look back and umm and ahh about situations that we should have been better at because that’s the way cricket is. But all credit to Glamorgan, they just outplayed us in all aspects.”

Asked to bat first, Glamorgan lost in-form New Zealand star Hamish Rutherford for just 15 as they made a cautious start on the big occasion.

Steven Reingold was brilliantly caught behind by Australian Bancroft from the bowling of Ben Raine, but that meant Glamorgan captain Carlson joined Andrew Selman at the crease.

Selman was lucky not to be run out, but the pair shared a brilliant 106-run stand.

Taking 10 minutes to read a few messages. So much love! What a day for the club and the squad that played. Awesome spirit from this group throughout. So glad this made a lot of people happy.

Carlson went to his 50 with a huge six off Scott Borthwick and despite Chris Rushworth’s 10 overs going for just 37, Glamorgan looked well set for a huge score on a belting Trent Bridge wicket.

Carlson was batting beautifully, but with his team struggling, Durham seamer Matty Potts changed the game when he dismissed Selman and Billy Root in consecutive deliveries.

Root was unfortunate to be given lbw but when Carlson followed – caught behind by Bancroft from Potts – Glamorgan had to rebuild.

Salter added some late impetus with an impressive 33 from 22 balls and forced Borthwick from the field after he injured his hand attempting a caught and bowled.

Glamorgan’s total was one they would have taken before play, but it felt like they were at least 20 runs short and Durham’s reply started solidly. It didn’t prove to be the case.

Veteran Hogan appealed for lbw and saw Selman drop a difficult chance at slip after the edge of Graham Clark so Carlson opted for the spin of Salter. It worked immediately.

‘It’s a huge moment for the club, the guys have been outstanding all through the tournament and they fully deserved to finish off with a great win in the final’ – the @RoyalLondonCup winning head coach David Harrison #GoGlam https://t.co/0io53mDLgK

Salter clean bowled Alex Lees and then picked up the key wicket of Clark, caught in the deep for 40. It meant this was the first Royal London game in which neither of Durham’s openers had scored a 50 and when Borthwick spooned James Weighell in the air, Glamorgan sensed blood.

With Royal London top run scorer Clark back in the pavilion, Durham looked panicked and Salter grabbed his third when David Bedingham, like Clark, was caught by Weighell.

Bancroft was circumspect knowing his team were relying on him to keep their hopes alive, but his run-a-ball half century came to an end in unlikely fashion.

He could have hit a rank, short ball fromReingold anywhere, but instead he put it down deep square leg’s throat where Glamorgan substitute Andy Gorvin took a smart and crucial catch.

Durham needed 101 from the final 10 overs with Dickson their main hope, but he ran out of partners and Glamorgan’s players went wild when Hogan took the final wicket.