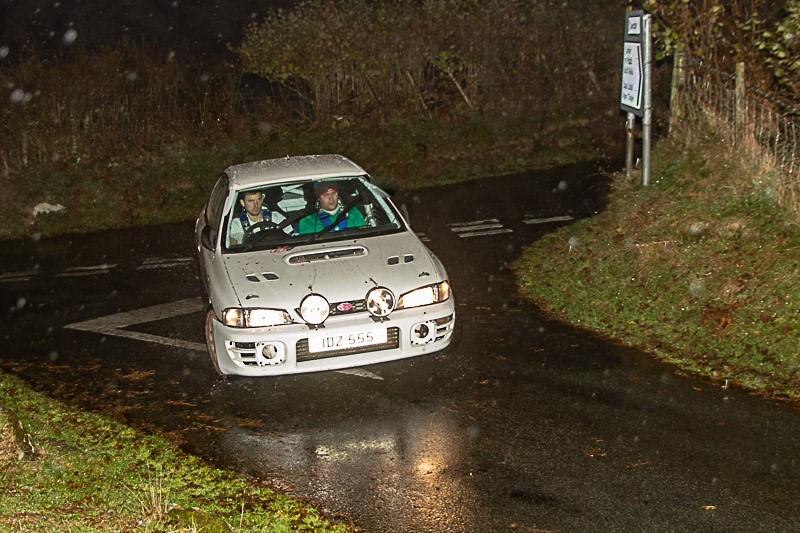 Andy Davies is the new 2018 Welsh Road Rally Champion, having clinched the title on the penultimate round of the series, the recent Powys Lanes Rally, in his Subaru Impreza.

It’s a title Davies, who lives in the village of Cribyn, near Lampeter, has wanted ever since he took up rallying, with plans for a proper attempt at the series hatched over a coffee with his Betws Bledrws-based navigator Michael Gilbey.

The season began with the Dovey Valley Motor Club-organised Rali Mike Darowen (3-4 February). Gilbey won the slippery event navigating for Kevin Davies in a Ford Escort, while Davies started what was to be a title-winning season with a solid seventh, and scoring 93 points out a possible 100, co-driven on this occasion by Cadog Davies.

Round 2 was an event Davies had always wanted to win – his home Rali Bro Caron (24-25 February), organised by Lampeter & District Motor Club. Partnered by Gilbey, a slide into the scenery saw them in second place at the fuel halt and in determine mood as the second half of the event took competitors from Llandovery towards Lampeter on more familiar, often-used, roads. This didn’t however make it any easier, as black ice had begun to form on some of the lanes, adding to the challenge. Davies continued to push on as much as the slippery conditions allowed, setting excellent times on the final few time controls around Ffarmers and Oxen Hall to overtake Kevin Davies/Alan James (Ford Escort) and score a very hard-fought 34 seconds victory.

Harlech and District Motor Club-organised Rali Llyn (17-18 March) was up next, with around 100 miles of classic road rallying on the Llŷn Peninsula. With the title at the forefront of their mind, Davies/Gilbey had a plan to simply try and keep out of trouble and not worry about some of the quick local crews who were not registered for the series. While Carwyn Evans/Dylan John Williams romped home to victory in their Ford Escort, their plan worked perfectly – with Davies/Gilbey finishing an excellent fourth overall, first non-local crew and top registered championship finishers.

The PK Memorial Rally, organised by Bala and District Motor Club (23-24 June), followed after a slight break in the championship. The event was won by Dale Furniss – a competitor better known for co-driving for Osian Pryce – and Nick Bloxham in a rapid VW Golf GTI, while Davies/Gilbey strengthened their championship chances with third and a very handy 98 points.

The Knighton Motor Club-organised Pacemaker Rally (21-22 July) was next, with the summer date seeing a little shorter, yet no less challenging, 80-mile route. Darren Ikin stepped into the navigator’s seat to guide Davies, although transmission problems witnessed an early retirement. Mark ‘GT’ Roberts/Dylan Jenkins won the event in a VW Golf.

Davies’ title hopes took a hit with a second retirement in a row on the Caernarfonshire and Anglesey Motor Club-organised Rali Mon (15-16 September) – and event which was won by Gavin Edwards/Daniel Jones in a Ford Escort.

This made the Carmarthen Motor Club’s Autumn Rally (22-23 September) all the more important, with Davies/Gilbey focussed on scoring a good result and putting their championship challenge back on track. It was a very tight and technical route, with many difficult sections where time penalties were picked up, yet Davies held fourth at the petrol halt after a challenging half in difficult weather conditions. An impressive push in the second half of the event saw him fight back up the leaderboard to score his second victory of the season.

A very wet and stormy 1000 Lanes Road Rally (13-14 October), organised by the Heads of Valleys Auto Club, was next, and with Gilbey navigating for Kevin Davies again (and winning again in their Escort), Davies was co-driven along the 110-mile route by Dale Bowen. A puncture dropped Davies down to fifth at halfway, but a big push saw him climb back up to second at the finish.

The most famous Welsh road rally on the calendar, the Teifi Valley Motor Club-organised Cilwendeg (27-28 October) was next. Starting from the centre of Newcastle Emlyn, the challenging route included the famous Cwmtydu hairpins and at the fuel halt Davies was fourth and admitting to some slight driving errors. He used the brief rest halt to re-focus, before the Subaru driver clawed back time in the second half of the event to finish second, behind Davies/Bowen (Ford Escort).

The penultimate round of the series was the very popular Epynt Motor Club-organised Powys Lanes Rally (3-4 November), which started from the Royal Welsh Showground in Llanelwedd. Davies/Gilbey held a solid fourth overall at the petrol halt, with the nerve-wracking night continuing as they cautiously guided their Subaru to the final control where they finished third. Even with Davies/Bowen scoring another victory on the Powys Lanes, Davies/Gilbey had done enough to secure the drivers’ and co-drivers’ Welsh Road Rally Championship titles with a round to spare – with the Newtown & District Automobile Club’s Eagle Road Rally, which takes place this weekend (1-2 December).

And after the Powys Lanes Rally, Davies gave thanks to Gilbey for guiding him around the lanes so expertly, as well as all the other navigators that stepped in throughout the year. He also paid tribute to Delun for marshalling and being there all year, as well as all the event organisers and motorsport specialists for running the events and helping to keep his Subaru in good health, and lastly, to the man who inspired the whole thing in the first place, the late Greg Evans.