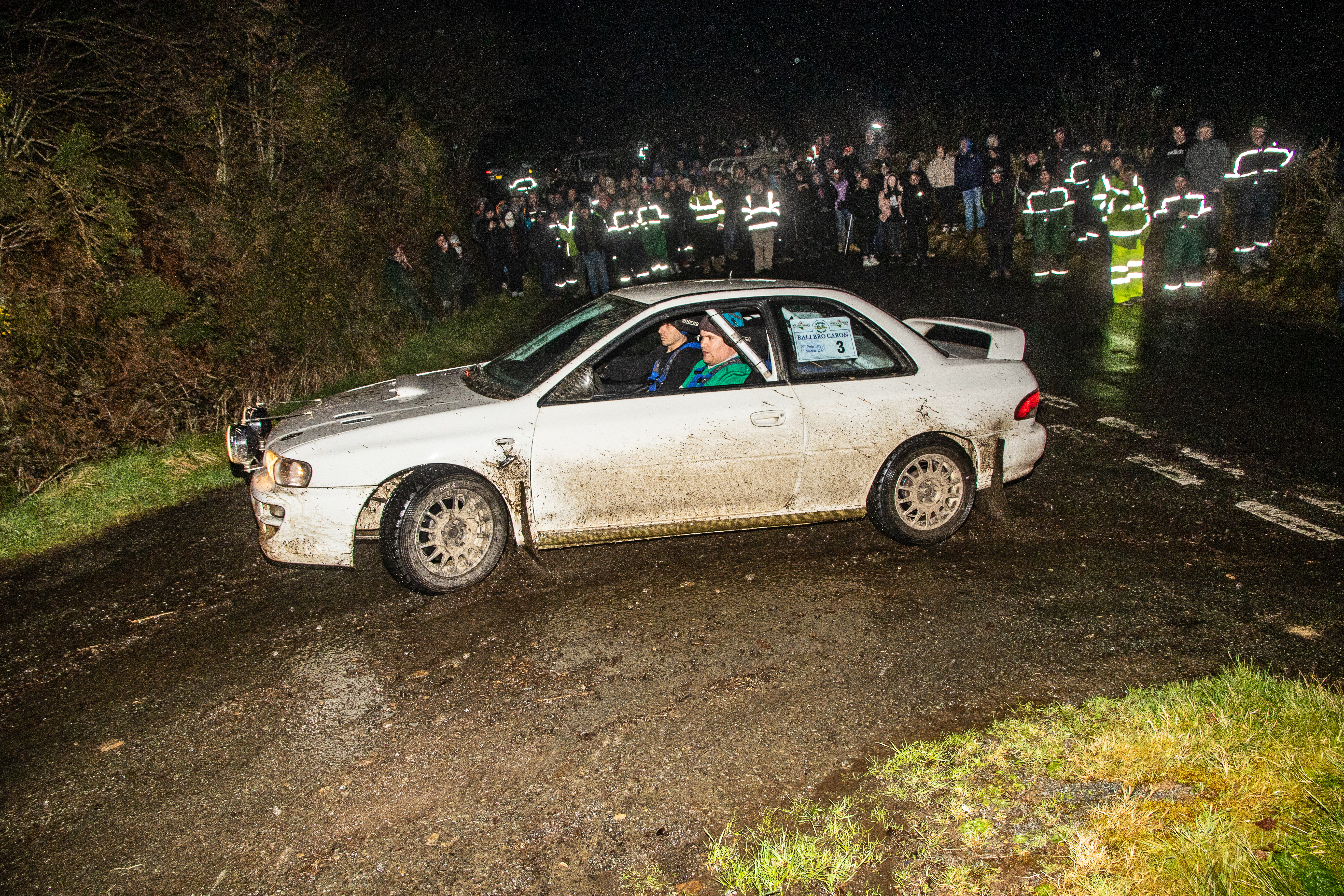 Andy Davies’ attempts to end his recent run of bad luck by completely rebuilding his Subaru Impreza were rewarded when he and co-driver Michael Gilbey won the opening round of the 2020 Welsh Road Rally Championship, the Rali Bro Caron.

The first car left the Lampeter leisure centre start at ten minutes to midnight, ready for the first section that was to be at the village of Parc-y-Rhos. From here competitors went south to the first white road of the night at the top of Pencarreg. Time controls 2 and 3 were located along this stretch, with most competitors picking up a minute penalty, although some of the lower runners had more. There were around a dozen that managed to pass through penalty free, which included last year’s winners and car number one, Kevin Davies/Alan James (Ford Escort Mk2) and Davies/Gilbey.

Another white road down into the village of Esgair-Dawe followed and it was Mike Roberts/Dafydd Sion-Lloyd that did best here as they stopped the clock on 34 seconds in their Escort. Hot on their heels were last year’s Welsh Championship runners-up George Williams/Aled Richards who had 38 seconds, with Davies/James next on 45 seconds.

The eventual winners broke a driveshaft along this section, Davies/Gilbey forced to take it easy until they could stop at the end and carry out repairs. For some their rally had already come to an end with the Escort belonging to Mark Lennox/Ian Beamond retiring with a damaged steering rack and punctured wheel. Also out were Malcolm “tar” Jones/Rhys Jones who had sheared a bottom ball joint on their Peugeot.

From here the route went by the village of Ffarmers, through Cwrt y Cadno before turning back towards Pumpsaint where the second spectator location was. Section finish 8 was at the end of this little section and again competitors gathered penalties here. Chris Hand/Simon Jones pushed really hard over here and were rewarded with a time of 41 seconds for their efforts. Davies/James were also going well and achieved 46 seconds here, while Arwel Evans/Nick Bloxham in their hired Escort Mk2 also did very well and achieved 48 seconds here. Alan Gaunt/Carl Williamson were best among the Experts with 54 seconds gained in their Escort, and right behind them was the Peugeot 206 of Dafydd Morgan/Kieran Price on 55 seconds.

It was teenager Ioan Lloyd and navigator Dylan Evans that were best Semi Experts in their Escort, who even in this early stage of the rally were on course for an excellent result as they achieved a time of 1 minute and 11 seconds here. In the Novice class, Llyr Davies/Gareth Jones were doing well with 1 minute and 39 seconds of penalties.

The route then headed south, with the next tricky section starting outside Hafod Bridge, and it was where Davies/James that set the standard as they only picked up 11 seconds of penalties.

The route briefly went north towards Caio forest and through a forestry track, with time control 12 located at the end of it. Davies/Gilbey put the Subaru’s four-wheel drive transmission to good use and achieved an excellent time of 15 seconds through here, a time that no other competitor could match, although Gavin Edwards/Daniel Jones did very well on 36 seconds.

The final section of the first half took place just outside of Cilcwm, which was section finish 13, and again competitors gathered penalties at this clock. It was John “tyres” Davies that did best here, he with navigator Eurig Davies managed to pass through here only gaining 9 seconds of penalties, their Astra was one second head of the escort of Mike Roberts/Dafydd Sion-Lloyd.

It was into Llandovery then for the refuel halt where competitors have a quick rest before tackling another demanding half. The top 5 positions read as:

The second half began with a short section just outside of Llanwrda. Here Davies/James had one of the tyres blow out on their Escort so they cut some of the route to insure they stayed within maximum lateness, although this did mean that they picked up some fails and dropped down the leaderboard. Section finish 15 was located shortly afterwards and here it was Davies/Gilbey setting the pace in IDZ, with a penalty count of 35 seconds. Just behind them were George Williams/Aled Richards and Gari Evans/Richard “ty-capel” Williams who both had 39 seconds.

A short neutral section followed back near Hafod Bridge, although this time the route was to the west of the village. Here competitors travelled north- west up towards Crugybar before turning back down to Waunclunda, before finishing just outside of Halfway. There were three clocks located along this section, they were time control 17, 18 and section finish 19. Time control 17 wasn’t a tight section so the majority passed through without gaining any penalties, but time control 18 was a lot tighter and on a far trickier section of road. This clock was timed to the minute and almost everyone here picked up at least one minute, although both Davies/Gilbey, as well as the BMW of Daniel Williams/Shaun Richards, both went through penalty free.

A difficult section 19 saw the Escorts of George Williams/Aled Richards and Richard Jerman/Ryan Griffiths tied for time on 41 seconds. Another short section from Maerdy to Soar followed. Section finish 21 was located here, where Tim Evans/Paul Jones did best with 13 seconds of penalties gathered here. Evans/Williams were next on 22 seconds, closely followed by Mark “GT” Roberts/Dylan Jenkins in their Golf on 25 seconds as well as Chris Hand/Simon Jones who also had 25 seconds. Michael Roberts/Natasha Roberts were leading Semi Experts here with 43 seconds gained. Leading reserve entries here were the reserve crew of Ashley Thomas/Oli Lloyd who were running at car 44 in a Ford Fiesta. They had a time of 1 minute and 12 seconds here, but unfortunately the crew had gone over time limit at main control 2, but still ran.

The next section took place just outside of Llansawel, where the first part was straight forward and the majority passed through penalty free, but the going soon got tough again after time control 23, where competitors turned off the road into a farm track that came out near the village of Harford. From here competitors crossed the A482 and went into Ffaldybrenin, where most of the front-runners picked up 1 minute of penalties.

Next up was a classic tight and difficult section where everyone picked up penalties, with Arwel Evans/Nick Bloxham being least penalised with 1 minute and 5 seconds in their hired Escort. One second down on them were Davies/Gilbey who were pushing the IDZ as hard as ever. Chris Hand/Simon Jones were next on 1 minute 14 seconds in their Sierra, while one second behind them were Richard Jerman/Ryan Griffiths. Rhodri Evans/Geraint Jones were also doing well here in their BMW with 1 minute and 20 seconds. They had in fact been doing well all night and were involved in a real battle with the Escort of Gari Evans/Richard “ty-capel” Williams who had also been having a good night. In the Semi Expert class Ioan Lloyd/Dylan Evans were on a storming run with 1 minute and 32 seconds. Jordan Evans/Johnny “bop-bop” Hands also did well in 1 minute and 44 seconds. In Novice class Llyr Davies/Gareth Jones had an excellent time of 1 minute 55 seconds in their Proton. Hot on their heels were Steffen Evans/Connah Urquhart on 1 minute 58 seconds.

The next section involved a couple of quiet zones so wasn’t tight and therefore pretty much no one picked up a penalty there. The final section of the night was another tricky one that involved competitors travelling through Cellan before turning left back out of the village. Section finish 27 was at the end of here and it was Arwel Evans/Nick Bloxham that did best, picking up 37 seconds of penalties, a great end to a good night for them.

With the competitive mileage done it was back to Lampeter Rugby Club for a well-deserved breakfast and results. After a long hard night, it was declared that the winners of the 2020 event were Andy Davies and Michael Gilbey, who for the second time in three years had managed to guide IDZ around the tight and twisty lanes of OS146 to victory. Their final penalty count was 9 minutes and 59 seconds.

“The second Rali Bro Caron win in three years was every bit as sweet as the first, on a rally that, as you know is very close to my heart,” said Davies. “It was great to just make it to the finish after our recent run of bad luck but even better to return to winning form.”

At the end of the first round of the Welsh Road Rally Championship it is George Williams that leads the driver’s standings as he claims 100 points from this event, second placed driver is Gari Evans on 98, and Richard Jerman is third with 96 points. In the navigator’s standings Michael Gilbey takes 100 points following the win, Aled Richards claims 98 points and Ryan Griffiths 96.

Round 2 of the Welsh Road Rally Championship is the Rally Llyn, organised by Harlech & District Motor Club, on 14/15 March.