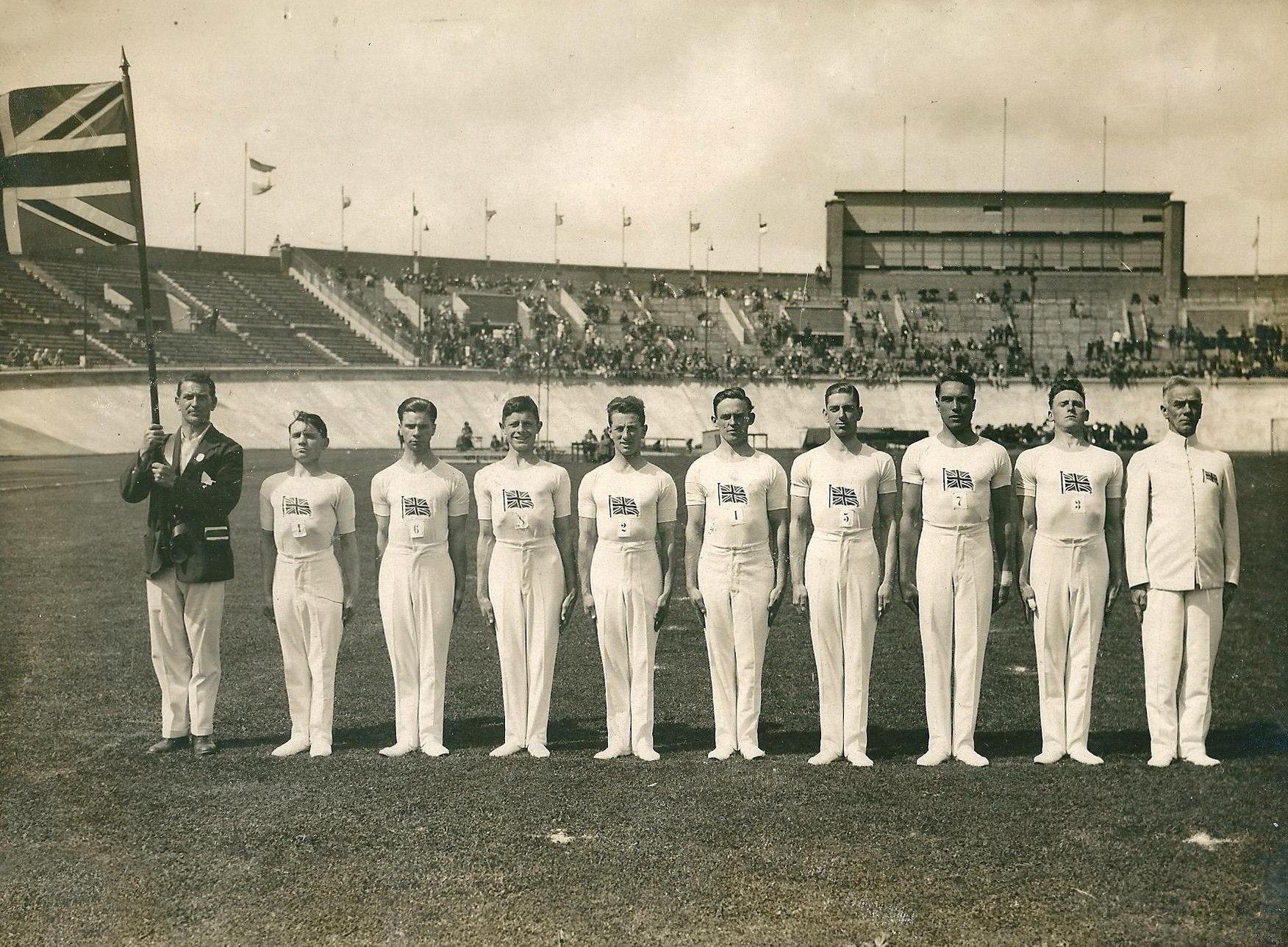 Arthur Whitford (fourth from left) was part of the Great briatain gymnastics teams of 1928.

For all those athletes cursing their luck and fretting over the postponement of the Tokyo Olympics to 2021, think again.

A 12 month delay is nowhere near as bad as the one suffered by those hoping to go to the 1940 Olympic Games.

Originally scheduled for Tokyo between 21 September and 6 October, the XII Olympiad, was rescheduled two years out to take place in Helsinki between 20 July 20 and 4 August.

They were eventually cancelled due to the outbreak of World War II, thus wrecking the hopes and dreams of athletes across the globe.

Among them was the Swansea gymnast, Arthur Whitford, who missed out on a third successive trip to the Games despite being Britain’s outstanding performer in his sport.

One of the greatest of all British gymnasts, he won the first of his 10 British titles in his native Swansea as a teenager in 1928.

That triumph, along with victory in the official Olympic trial, earned him a ticket to the Games in Amsterdam.

The British team finished 11th overall and Whitford was the highest placed individual in 63rd place, leaving his Swansea YMCA and Wales team mate Bert Cronin and the six other Brits trailing in his wake by more than 20 points.

If 1928 set him on a course that saw him become the dominant force in British gymnastics – he also won the Welsh championships nine times, the Scottish four times and the Irish twice – it was also his one and only appearance at the Olympic Games.

The Amateur Gymnastics Association decided not to send a men’s team to Los Angeles in 1932. This was partly due to cost and partly due to the lack of world class talent available.

Whitford stood head and shoulders above the rest of his British colleagues, but how would he fair on a world stage?

The AGA decided to send him to Paris for the World Championships in 1931, the first Briton to enter the event, to test him out.

He finished 29th and in consultation with the British Olympic Association it was decided the quality in the British squad didn’t merit the expense.

Four years later the Swansea YMCA coach Walter Standish was appointed as the British coach two years out and it seemed certain a men’s team would be sent to Berlin.

An eight strong women’s team did head to Germany, but after selecting a squad, which included Whitford as the likely captain, the men once again did not travel.

By that stage of his career Whitford had been British champion for nine years and decided enough was enough. He quit while still at the top of his powers and headed into semi-retirement.

“He was out of the game for two years and then his father persuaded him to have another go for the 1940 Helsinki Olympic Games,” recalled his former Swansea and Wales team mate, Walter Walsh.

“He agreed, and within three weeks of making this decision he again won the British championship, one of the few to make a successful comeback. With Mr Standish another plan of campaign was set out.

“In short, it was for Whitford to win the Olympic gold medal on the rings in Helsinki. His artistry on this piece, allied to his tremendous strength, was memorable.

“In fact, there has been no person to better his performance on this apparatus. Oddly enough, it was not his favourite piece of apparatus, as he used to enjoy them in this order – Pommels, High Bar, Parallel Bars, Vaulting, and last, Rings.

“Alas, it was not to be, as Mr Hitler had other ideas. As a competitor it was the end for Arthur Whitford, one of Britain’s greatest performers.”

And so one of the finest British gymnasts of all-time only managed one Olympic Games as a performer, but Whitford’s Olympic story wasn’t yet at an end. After ending his competitive career he went into coaching and once again reached the top of his field.

Having started a causal outdoor gym in his hometown it quickly turned into an indoor affair named Sketty Olympic Gymnasium.

By the time competitive gymnastics ceased at the onset of WWII, his teams held the following Welsh titles – Men’s and Ladies’ team and individual, Girls’ and Boys’ individual, Girls team and Club Swinging for boys and men.

He also trained his younger brother, Jack Whitford, to follow in his footsteps and win three British titles (1947-48-52).

Jack was made captain of the British team for the 1948 Olympic Games in London when Arthur was the coach.

Unfortunately, Jack was forced to pull out after breaking his arm in training a week before the event began. His future wife, Pat Evans, did get to compete in London and Jack went on to become an Olympian in Helsinki in 1952 when Arthur was the British trainer for a second Games.

Arthur Whitford was proof that all good things eventually come to he (or she) who waits!