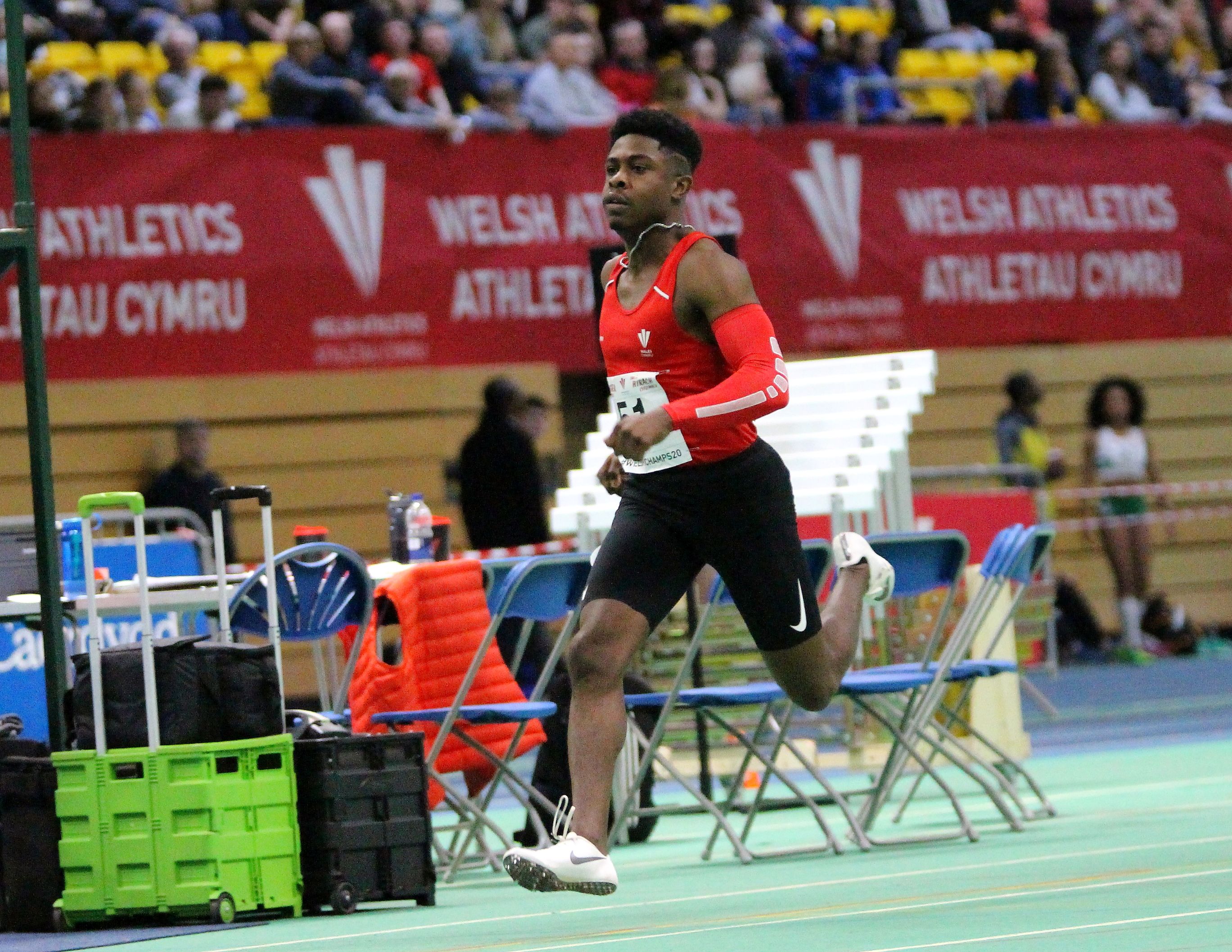 Jeremiah Azu was involved in a head heat at the England Athletics Age Group Championships in Sheffield.

Jeremiah Azu was involved in a dramatic 60m final at the England Athletics age group championships in Sheffield at the weekend.

The Cardiff teenager got off to a relatively slow start, but soon got into his stride to challenge Liverpool’s Henry Nwoke for the title with a late dip for the line in a desperately close finish.

The commentators initially called Azu as the winner, but it soon became evident no-one could be certain whether the Welshman had retained his title or if Nwoke had just held on to earn the crown.

The drama was ramped up further as officials pored over the photo-finish for several minutes afterwards.
Eventually it was announced that the race had been declared a rare dead-heat with both athletes given the same time of 6.77 and a gold medal each.

Further down the field, Menai Track and Field AC’s Zachary Price finished seventh in a time of 6.95, having earlier set a new indoor PB of 6.93 in winning his heat and then equalling it in the semi-finals.

There was further Welsh gold in the field during the event in South Yorkshire with Osian Roberts following up his Welsh high jump under-15 indoor title with the English equivalent.

The Carmarthen Harrier was a comfortable winner with his winning height of 1.80m a full nine centimetres higher than his nearest opponent, Justin Price, of Basildon AC.

Back on the track, Cardiff’s Reynolds brothers boosted their burgeoning reputation by following up their dominant middle distance displays at the Welsh junior indoor championships, where they both completed their age group’s 800m and 1500m double, with further medal success in Sheffield.

Meanwhile, the Under-20 final saw his brother Ben claim a bronze medal behind champion Henry Johnson, of Houghton Harriers, in a time of 4:00.17.

There were further medals in the men’s and women’s under-17 pole vault competitions.

Swansea Harrier William Trott claimed silver in the men’s event with a new PB of 4.20 behind Sale Harrier Ben Lazarus.

And his feat was matched in the women’s under-17 pole vault, where Isabel Thomas, of Cardiff Athletics claimed silver behind Lewes AC’s Gemma Hutton with a height of 3.60m.

The men’s under-20 800m produced an excellent performance from Welsh champion David Locke, of Cardiff Athletics, who claimed a bronze medal in 1:54.77 behind gold medal winner Simon Coppard, of Tonbridge AC.

The sprint hurdles also proved to be a happy hunting ground for the Welsh with Cardiff Archer Sophie Lisk claiming bronze in the under-17 60m hurdles in a new PB of 9.09.

The under-20 final saw Gabby Dickson, of Cardiff Athletics just pipped to the silver medal when she clocked a new PB of 8.80 – the same time as Aldershot Farnham and District’s Ella Manning – but was adjudged to have finished third.

There were also some other stand-out performances by U20s Patrick Harris in the shot put and Cardiff’s Emmanuella Kone in the 60m who both finished just outside the medals in 4th place.

Full results can be found on the English Athletics website.