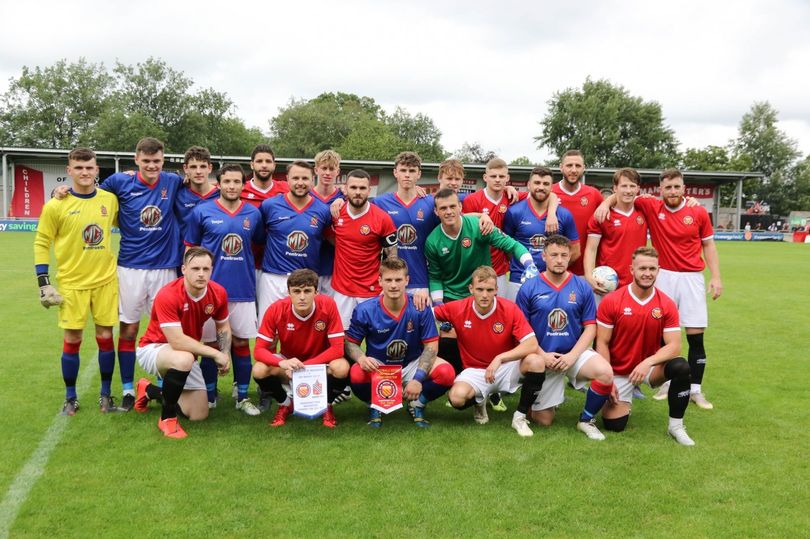 Players from Bangor 1876 and FC United of Manchester link-up for a pre-match photograph.

Newly-formed Bangor 1876 played their first ever match when they took on FC United of Manchester at Broadhurst Park.

The fan-owned Gwynedd League club were followed to Manchester by more than 800 fans and simply playing this fixture was huge.

Their supporters celebrated wildly when Ben Lundstram, who came through the academy system at Bangor City, scored the first ever 1876 goal.

He made an impression with City’s u-19 team and with Huws Gray Alliance level.

In the second half of last season Lundstram played a key role for Penmaenmawr Phoenix in Lock Stock Welsh Alliance Division Two, where he played with his father, Mike.

Roy Cavanagh MBE was at the FC United of Manchester v Bangor 1876 match and provided his view:

“With many professional football clubs threatening to go under due to their financial issues another fan led organisation started their new career when Bangor 1876 travelled to one of the most successful, and largest, forms of a fan-led football club, FC United.

“They are entering their 15th season having suffered their first relegation in what, so far, has been a memorable journey for a club created in defiance of the Glazers take-over at Manchester United.

“I have been to FC United a few times over their journey, which started by hiring Bury FC’s Gigg Lane for quite a few seasons, before, finally, getting their own excellent Broadhurst Park stadium.

“Every time I have watched them you cannot fail to be attracted by the brilliant atmosphere created, with numerous flags around the ground and a great singing section.

“An excellent programme of 32 pages, costing £2, continues the fine impression of FC United.

“Bangor 1876 came in fine numbers considering it was their first ever fixture helping bring a crowd of around 800 for the friendly.

“They are a club led by disenchanted Bangor City FC fans.

“As a collector of programmes, I first came across Bangor City back in 1962 when they were paired with Napoli from the mighty Italian league in a European Cup Winners Cup tie.

“That went to a third match, as in those days away goals did not count and a draw on aggregate meant a third game.

“A fantastic Bangor 2-0 victory in the first leg was negated when the Italians won 3-1 before a vociferous Naples crowd.

“The deciding game was played at Arsenal’s Highbury Stadium in London and the Italian side shaded it 2-1, which was the programme I came across back in the early 1960s.

“The 2019 version of a football side from Bangor were always going to be up against it for their first foray into competing and against a fired-up FC United team, containing numerous newcomers.

“They desperately needed to start brightly before conceding. Sadly, though, an early goal was the last thing they needed.

“A second goal was not a disaster, but a five-goal salvo in the last 20 minutes of the first half was. The score was 7-0 at half-time.

“FC United were strong down their left with full-back Adam Dodd and left-winger Regan Limey particularly impressive as was their centre forward, Louis Myers, who held the line excellently.

“Bangor 1876 goalkeeper Leon Jones was most certainly not culpable for the seven goals he conceded in that first half and it must have taken a lot of character to keep focused as the onslaught just came and came.

“The end was a tail between the legs defeat for Bangor. The most inspiring moment came in the last minute when Lundstram had the honour of scoring the first goal scored by a Bangor 1976 footballer.

“Bangor 1876 have now begun their football journey, I wish them well.”