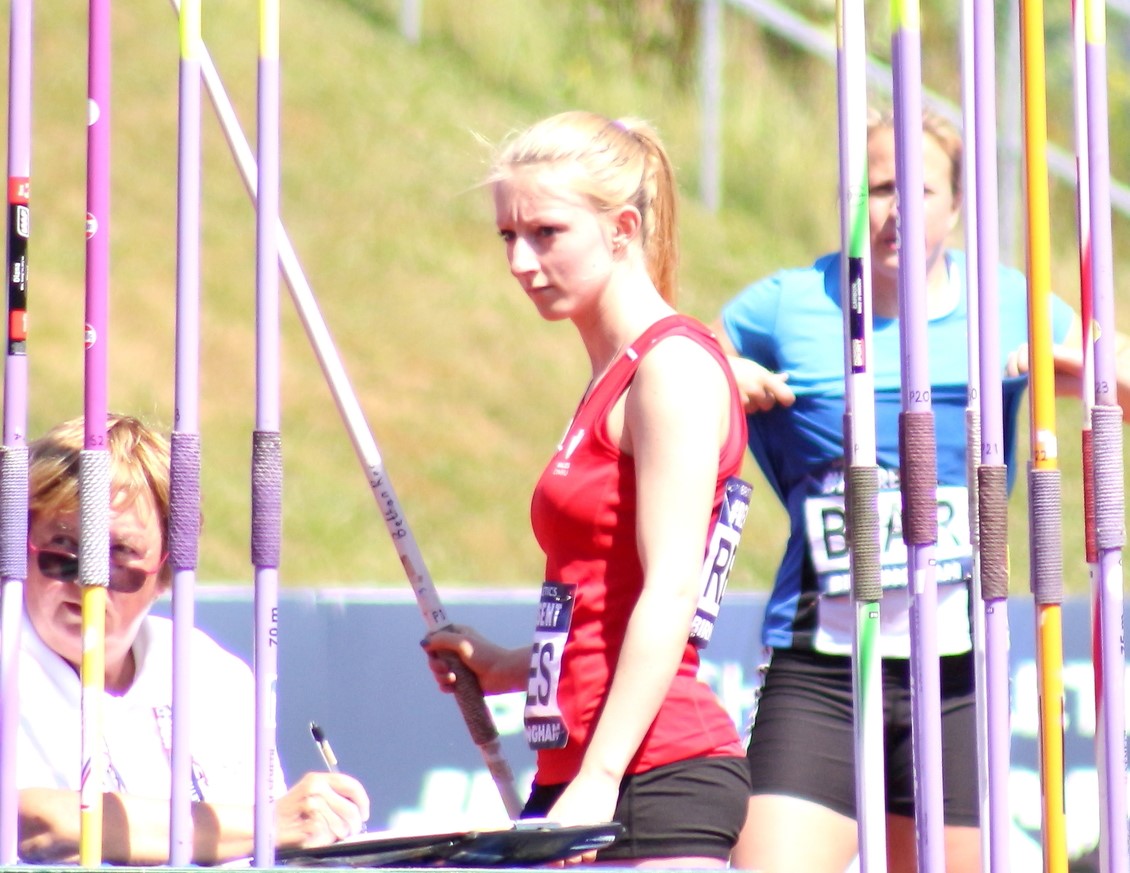 At noon, Rees started competing in the javelin at the English Schools’ Championship at Alexander Stadium in Birmingham.

After clinching the title with a throw of 47 metres, Rees collected her medal and jumped straight into a car and headed south west.

At 8.30pm, the 18-year-old was beginning her defence of the Welsh Senior javelin title at Cardiff’s International Sports Campus at Leckwith.

And the Birchfield Harrier did exactly that, winning the Welsh title for the second year running with a throw of 45.75m.

An excited Rees said afterwards: “It means a lot, I just feel so proud to be Welsh and I try to represent Wales as much as possible.

“If I can be at the Welsh championships then I will and if it means leaving the schools to come here and then driving straight back again then I will.”

There was a surprise for the athletes preparing for the men’s 800 metres when they were told 10 minutes before the schedule semi-finals that they had been scrapped and they would be contesting a straight final on Friday night.

And it was Elliott Slade who reacted the best to the challenge as he fought off Welsh Commonwealth Games athlete Tom Marshall to take the title in a time of 1:50:48.

Slade was another athlete who had travelled to compete on the first evening of the Welsh Championships. This was the Cardiff AAC athlete’s first appearance at a Welsh Championships for four years after spending time in America and Ireland, where he is now based.

Runner-up Marshall was returning to the track for the first time since the Gold Coast games and was delighted to clock 1:50.68. Michael Parry, of Colwyn Bay, picked up the bronze in 1:51.30.

In the field, the first medal of the evening was comfortably won by Birchfield Harrier Adele Nicoll in the shot put with a distance of 44.84m.

Melissa Bird, of Cheltenham and County Harriers, was second with 39.66m and Amber Simpson, of Deeside AAC, third in 39.67m.

Guest Joel Leon Benitez won the overall men’s pole vault competition but the Welsh title was taken by Thomas Walley, of Wrexham AAC, with a height of 4.25m.

Lili Church, of Carmarthen Harriers, won silver with 1.62m and Abigail Buxton, of Pembrokeshire Harriers, was third with 1.58m.

Laura Samuel, of Birchfield Harriers, won the overall competition in the women’s triple jump final, but the Welsh gold was grabbed by Sian Swanson, of Swansea Harriers, who leapt out to 11.63m.

Back on the track, there were a couple of PB performances in the men’s 2000m steeplechase final from Brychan Price-Davies, of Brecon AC, who claimed the title with a time of 6:32.28 and silver medallist Brian Dias, of Cardiff AAC, with 8:27.93.

Eight men qualified for Saturday’s 200m final. Cardiff AAC’s Kristian Jones was comfortably the fastest qualifier as he clocked a personal best time of 21.05 to win his heat.

The other heat winners were Marvin Popoola, of Herne Hill Harriers, in a time of 21.57 and Lemarl Freckleton, of Swansea Harriers, with 21.79.

There were a rash of PBs in the women’s 200m heats with five of the eight qualifiers registering lifetime bests.

Heat two was won by Cardiff AAC’s Maltese international Charlotte Wingfield, who clocked the fastest qualifying time of 24.20, while Bethan Wakefield, of Bristol and West AC finished second in a PB of 24.92.

In the heats for the 800m final, Laura Maddox, of Swansea Harriers, was the fastest qualifier by winning heat one in a time of 2:11.60.

Saturday’s action gets underway at 11.30am at the Cardiff International Sports Campus.