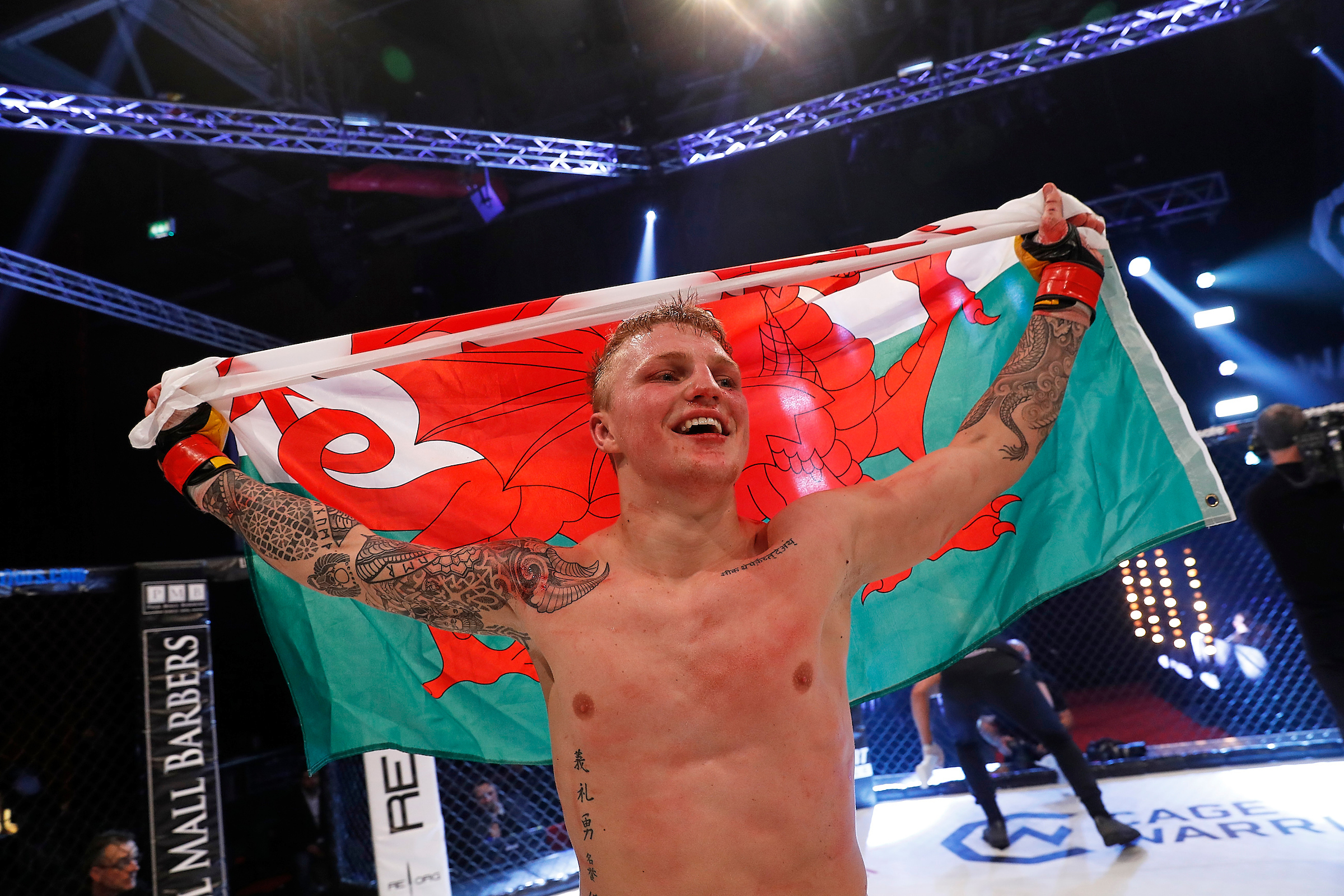 Mason Jones is aiming for Cage Warriors' glory at the Viola Arena in Cardiff Bay on Saturday.

Wales’ leading Cage Warriors contender Mason Jones is backing his home country to go all the way to the Rugby World Cup semi-finals in Japan.

Coach Warren Gatland’s Welsh team defeated Georgia 43-14 at Tokyo Stadium in their opening group match and passionate rugby supporter Jones says: “When I get some downtime from training I’ll be watching the highlights of Wales’ World Cup games.

“They will 100% qualify from the group stages and win a quarter-final. My Dad is out in Japan watching and my girlfriend, Madison, is a big rugby fan so we’re backing them all the way.”

Headline fighter Jones, from Blaenavon, is three weeks away from the MMA event in Cardiff Bay when Europe’s best mixed martial arts athletes will battle it out in front a packed crowd at Cardiff’s Viola Arena.

Unbeaten Welsh prospect Mason ‘The Dragon’ Jones, who has won all seven of his professional fights, is headlining the bill at the Viola Arena in Cardiff Bay on October 12 and fights Finnish sensation Aleksi Mantykivi.

A win at Cage Warriors 108 could catapult one of these men to a shot at the World title.

Jones is currently training in California with his MMA team and Jones says training is going well with plenty of Ultimate Fighting Championship athletes to “It’s been tough work with three intense training sessions a day and really competitive and experienced UFC guys to work with. It’s all excellent preparation.

“I’m really looking forward to headlining Cage Warriors in Cardiff – it will be good to be the main attraction this time in front of a big, vocal crowd.

“This will be a big fight, the hardest of my career and he is the best opponent I have come up against, but I am totally motivated by that challenge.”

Jones’ long-term girlfriend is former Commonwealth games Tae Kwon Do specialist Maddison Davies, who has been out in the USA in support to assist with training ahead of the big fight.

Jones said: “I’m lucky – Maddison is great because she understands totally about what it takes to get to the top of your sport, particularly the hard times when I have to cut weight before fights.

“She gets it, really pushes me and tells me off if I’m not smashing my targets.”

Jones expects it to be another successful night for a card packed with Welsh MMA athletes.

“We have such a lot of MMA talent, skill and expertise here in Wales and a lot of it will be on show on October 12.

“It takes a lot of commitment and focus to get to the top of this sport and with Welshman Jack Shore preparing for his first UFC fight out in Copenhagen on the world stage in a week’s time, we have a lot to shout about here in Wales in terms of the sport right now.”

Jones is seen as the most exciting Welsh prospect on the European scene and many predict for him a similar future to previous Cage Warriors champions-turned-UFC stars Shore, Brett Johns and Jack Marshman.

Competing alongside Jones at CW108 is Welsh women’s prospect Cory McKenna from Cwmbran, who has spent her summer stateside in California training with UFC star Urijah Faber to ensure her next performance is a show-stopper.

Tickets for Cage Warriors 108 are still available and can be purchased here https://bit.ly/2Zl0fsv

To find out more about CW108 and MMA visit www.cagewarriors.com

Abertillery’s Jack Shore makes his UFC debut as the odds-on favourite against Nohelin Hernandez at UFC Copenhagen this Saturday (September 28).

The bantamweight Jack Shore was the fourth Welshman to be signed by UFC, following middleweights Jack Marshman and John Phillips plus fellow bantamweight Brett Johns.

He defeated Scott Malone at the Viola Arena in Cardiff to secure his 11th professional win and remain undefeated before signing for UFC.