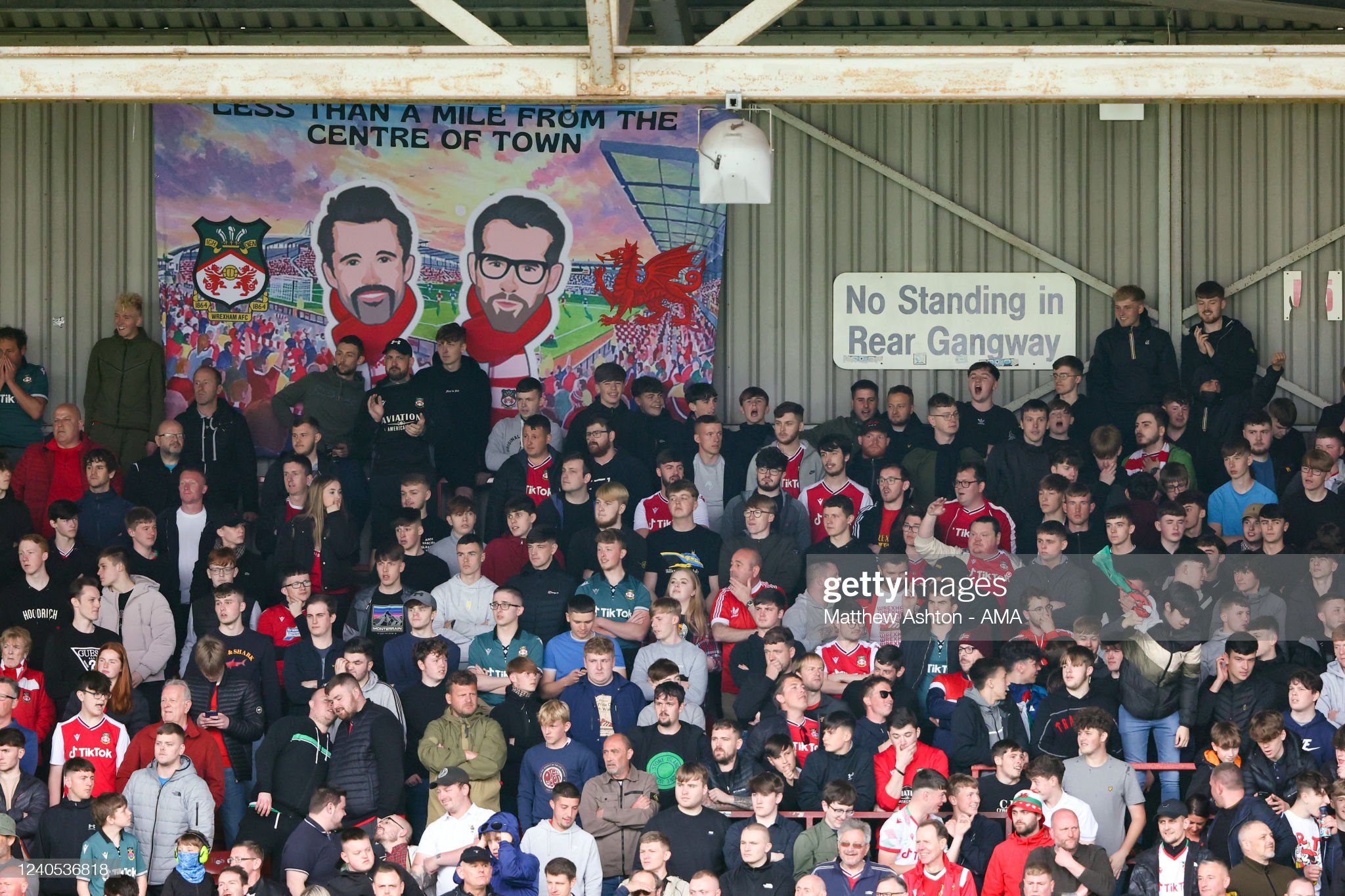 Fans of Wrexham watch the game with a banner showing artwork of their owners Ryan Reynolds and Rob McElhenney. Pic: Getty Images.

Wrexham boss Phil Parkinson insists even if his club fail to get a Hollywood ending to their promotion push, they will not be left on the cutting room floor.

Parkinson has got used to cameras everywhere he goes as the manager working for A-listers and joint owners, Ryan Reynolds and Rob McElhenney.

The perfect script would be for Wrexham to win the National League title and return to the EFL after 14 years away by winning at Dagenham and Redbridge on Sunday on the final day of the regular campaign.

But if Stockport County get just a point at home to Halifax, then County will go up and Wrexham will take their chances in the B-movie play-offs.

If the worst happens and it’s Hollywood heartbreak, then Parkinson states: “The owners’ interest won’t be reduced.

“I go back to my first chat with Rob McElhenney when we spoke about the long term picture that included the stadium development and also the training ground. In the short term, we also had to build a squad.

“But they are genuine people who want to build a football club and I’m sure they will be right on board whatever happens.”

Reynolds and McElhenney will be following the game on a live stream from the USA and will call Parkinson afterwards – as they have done with almost every game this season.

But the pair plan to fly over next week when the club’s incredible season will switch to Wembley and an FA Trophy Final against Bromley.

The actors are also making a documentary on their first season in charge and Parkinson has had to get used to cameras following him, even around his own home.

“They have been to the house. My wife, Anne, steered them away from her, so she has kept away from them most of the time.

“But the good thing is they are trying to tell the story of the town as well as the football club. It’s not just about being in the dressing room and at training.

“It’s about going around the players’ houses and speaking to their families – getting an understanding about what it means to them to play for Wrexham, especially people like Jordan Davies who is a Wrexham lad.”

Local boy Davies has scored 20 goals from midfield for the Dragons this season and hopes the Wrexham documentary becomes the Wrexham blockbuster, with his part played by Tom Hardy.

“I’m a big fan of Peaky Blinders, so it would have to be Tom Hardy to play me if I got the choice,” says Davies.

The former Brighton player, who returned to his hometown club at the start of last season, says: “There is no better place to be in League Two or the National League, than Wrexham at the moment. The buzz is incredible.”

“There has been an edge about our play, a physicality and an intensity; that is good but we have got to combine that with quality and we have been doing that.
The aim is to continue it.” – @Wrexham_AFC manager Phil Parkinson.https://t.co/rImtIt1Njc

The owners’ Netflix production could well be packed with silverware, with a local lad coming good taking top billing.

When Davies headed home to Wrexham from Premier League club Brighton & Hove Albion in the summer of 2020, he could never have imagined how far reaching the effects of his transfer would be.

With their trip to Wembley to face Bromley coming in between today’s final game in the regular league season and the play-offs — they are guaranteed a home semi-final if they don’t win the title — it could well be a blockbuster ending to the season.

“I don’t think being a film star is for me, although maybe some of the other lads fancy a bit of that. I’m a bit quieter and more reserved,” adds Davies.

“I’ve got a few dreams, though, that I’d like to come true over the next couple of weeks — winning the league and scoring at Wembley.

“The National League is renowned for being tough to get out of. There are some big clubs in this division, but it is clear and obvious to everyone that Wrexham is going places.

“Since Ryan and Rob took over there has been no better place to be. Every time they come over, everything they’ve done in the media, they’ve done it so well.

Jordan Davies | “I’d like to dedicate my goal to my nan; it was her first time here ever.”

“I guess that’s their job, but when you see first-hand what they do and what they bring to the club it is fantastic. I wouldn’t have signed a new contract this season if I didn’t believe in the club, the squad and the manager.

“I’ve got no doubt we will go up, if it is not this year then it will be next year. It is only a matter of time.”

Davies was ten when Wrexham dropped out of the Football League. He was a season ticket holder for many of the years after that before joining the club’s academy.

More than most in the present squad, he knows what it would mean to the fans to take the step back into the big time and regain their place again English football’s 92 elite clubs.

“Ever since I realised what was going on at the club, and I went each week as a season ticket holder, it is incredible to think we’ve got one last chance in the last game of the season to get promotion,” added Davies.

“It hasn’t always been Hollywood at Wrexham, there have been bad times. Before Ryan and Rob came in the town was getting a bit run down, it was an eerie place and not much was happening.

“To be honest, it wasn’t a very good place to be. Since they came in, the town has had an uplift and it is now a vibrant place now.

“We’ve been able to forget about the bad times and I can’t remember so many unforgettable moments at The Racecourse as we’ve had this season. It will go down as a season to remember even if we don’t get promoted.”