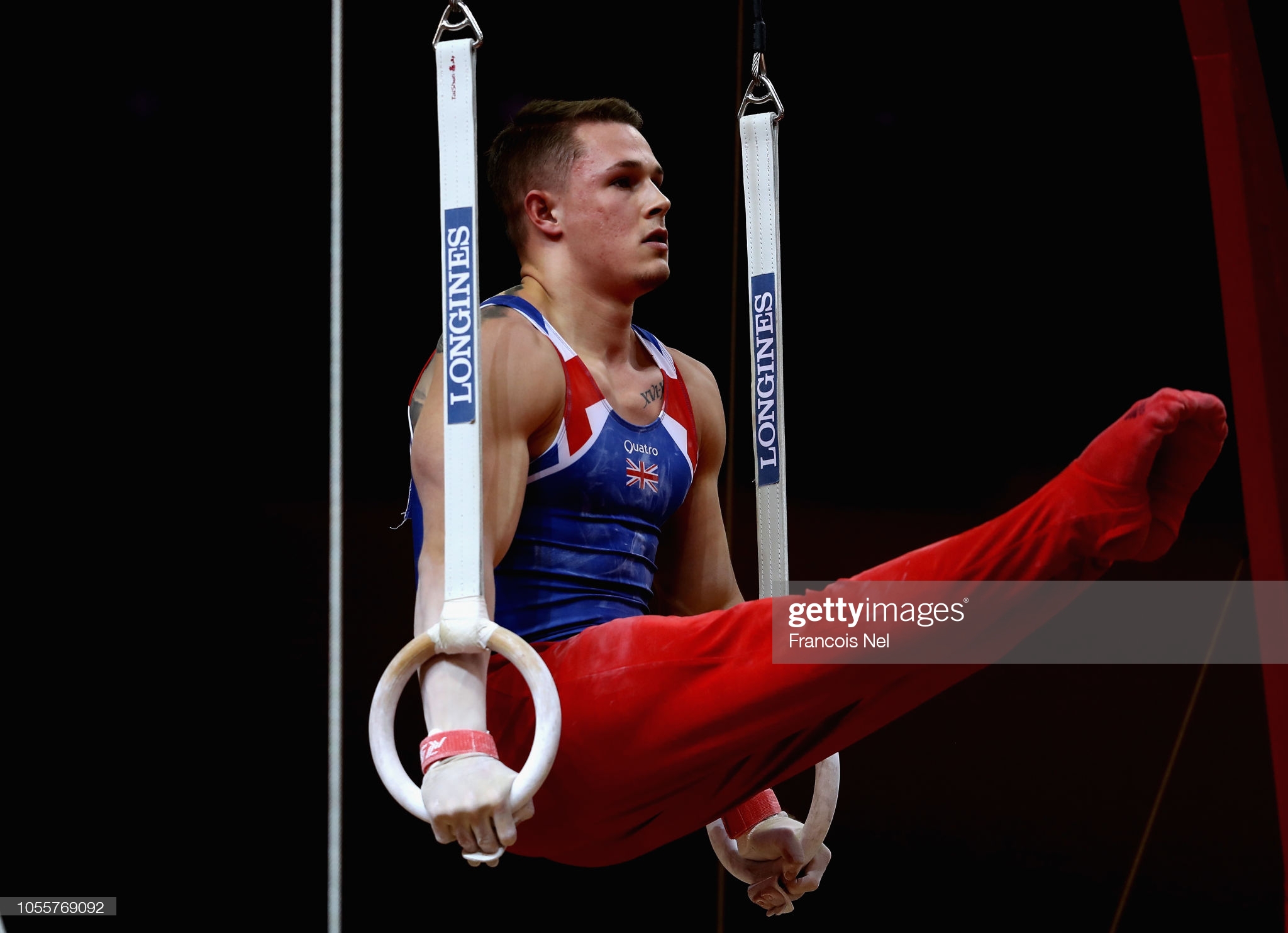 Wales’ leading male gymnast, Brinn Bevan, missed out on Olympic selection this year due to injury. But the 2016 Olympian is refusing to be feel downcast and has instead set himself a new ambition – to wear the red vest of Wales at the Commonwealth Games for the first time, as he tells Tom Prosser.

Welsh Gymnastics star Brinn Bevan says he can’t wait to get the dragon on his chest as he aims to honour his late father’s side of the family by representing Wales at next year’s Commonwealth Games.

Bevan previously competed at the 2016 Olympic Games and has also medalled at the World Championships – winning silver in the team event in 2015.

Before that, he earned gold in the team event at the 2012 European Junior Championships, and gold again in 2014, when he also claimed individual silver on rings and parallel bars.

But he is yet to appear at a Commonwealth event and is hopeful of competing at his first in Birmingham next year.

“The Commonwealth Games is the last one to tick off the list for me,” explains Bevan, who is from Essex but represents Wales through his father’s side of the family.

“Switching to Wales was a decision that I’ve been wanting to make for a very long time. I’ve been trying since I was 10 years-old to make the change.

“It’s going to be really special as I feel like I’ll be competing for my home heritage. I want to do my dad and his side of the family proud.

“Ever since I can remember, we’ve always tried to make yearly visits to Aberystwyth to visit the family.

“Even when I’m at home, I’m always supporting Wales in other sports, like rugby. It’s a great feeling to be able to represent Wales.

“I can’t wait to get that dragon on my chest.”

Bevan, 24, who hails from Southend, is a passionate supporter of Welsh gymnastics and he hopes to help the sport to further develop in Wales.

“Gymnastics isn’t the biggest of sports in Wales, currently but I think it’s something that can grow,” he says.

“If I can inspire the younger generation- then great. It’s only going to help having bigger and better athletes.”

“Leading into the Commonwealth Games, I think we have a great shot of winning a team medal.

“There’s a lot of strong individuals and I think we will come together well as a team, which will hopefully inspire people to take up gymnastics.

If mental toughness has been a requirement for all athletes over the past 18 months of the pandemic, then Bevan had plenty in store.

He had to be strong over the last year after his hopes of reaching Tokyo were dashed at the final trial event due to a fracture of his right leg during a routine.

Looking back on my career, it’s been so important for me to re-engineer & re-imagine myself to ensure that I was constantly achieving at the highest level!@Sprintex_ASX (ASX:SIX) are no different. They’ve just gone through the same process and have re-born themselves on the ASX! pic.twitter.com/IXJtFKEDtc

It was not the first time a broken bone had disrupted his progress.

“I had an unfortunate injury at the last Olympic trial where I fractured my leg, again, but I’ve now had the all clear and I’m pleased to be back in action,” says the gymnast who also had to overcome a double leg-break in the run-up to the Rio Olympics in 2016.

“It was really tough, but lots of people have been in difficult positions, too, with coronavirus and how disruptive it has been with training.

“At the third trial, I really felt like I was back to my normal self. I felt like a competitor and a gymnast again.

“The vault was where I got injured and frustratingly it was my last piece.

“I thought everything went well up until then. But straight away, my focus turned to the rehab, which helped me, mentally.”

“Rio was an incredible experience. That was the first Games I could have attended due to age eligibility. I felt like a very young athlete at the time.

“I learnt a lot from that experience, such as coping with crowd pressure, going to different countries and coping with new time zones.

“In terms of my individual performance, I hit every routine well and I didn’t make any mistakes.

“As a team we came fourth, but it was a very strange feeling.

“You are so proud of the performances you produced but then at the same time you are frustrated because you feel so close to winning that dream medal.

“You can always think ‘what if?’ but it’s definitely helped to progress the rest of my career.”

Bevan was recently crowned as a British champion in Cardiff after winning gold in the parallel bars event.

He may potentially compete at the World Championships in Japan in October, but wants assurances over the quarantine protocols as he does not want to miss a few weeks of training time on his return to the UK.

After Birmingham, then reaching another Olympics is a big target.

Brinn Bevan . . . The Welsh Gymnast Who Refuses To Lose His Grip On Another Olympics

“It’s every athlete’s dream to compete at an Olympics, even if it’s not your first. The Olympics is the absolute pinnacle. It’s definitely in my plans to try and qualify.

“I’ll be training in the background as hard as I can to try and make that happen.

“Of course, you never know what will happen with injuries and other circumstances but I’m going to give it my best shot.”

Bevan speaks with pride about the opportunities he has been presented with through gymnastics and would love more people to take up the sport.

“Everyone’s got to start somewhere. It’s not always the most pretty thing but get active, enjoy what you’re doing, and only good things can come of it.”

One thought on “Brinn Bevan Missed Tokyo, But Now He Has Set A New High Bar . . . A Medal For Wales At The Commonwealth Games”