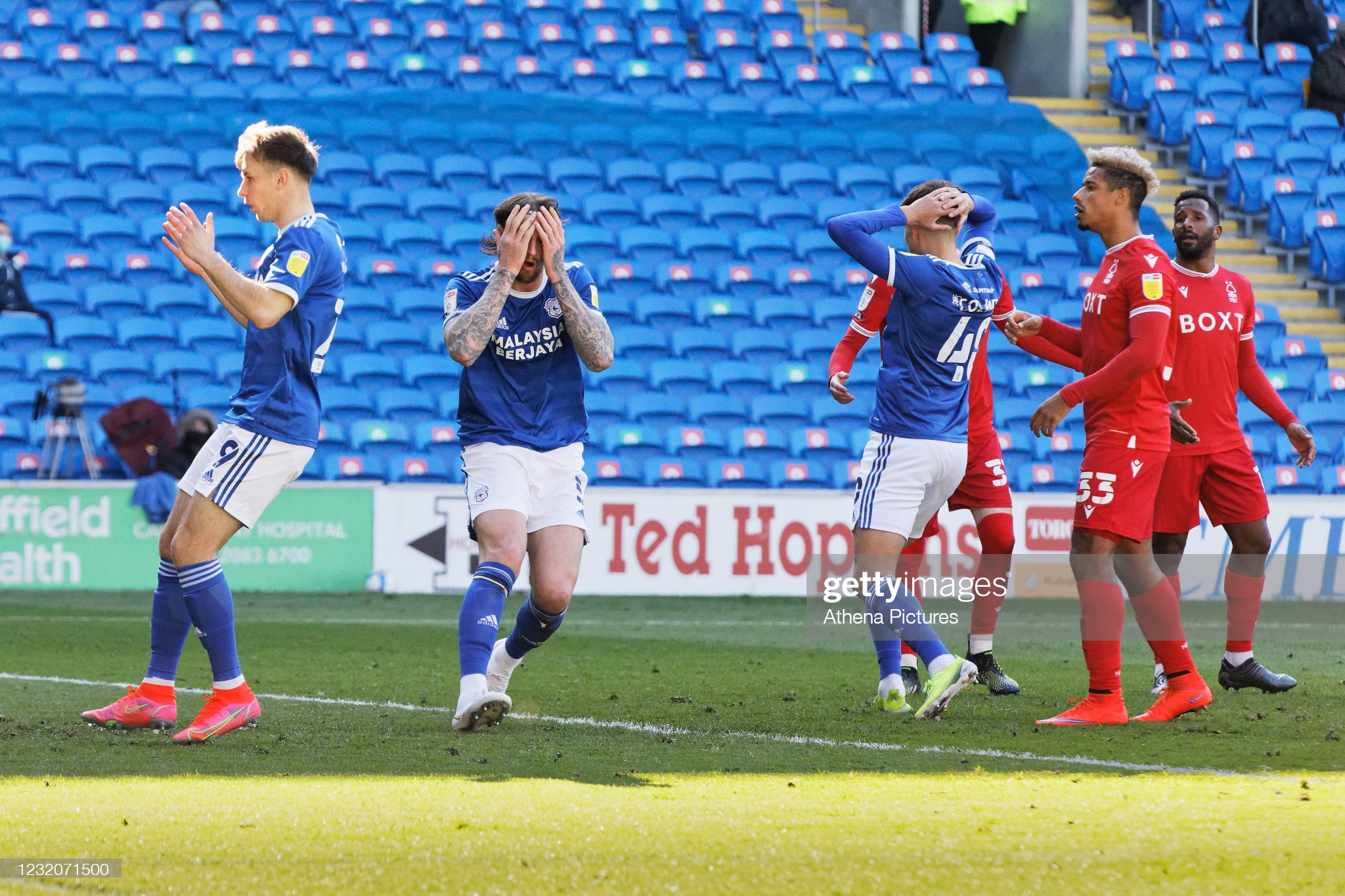 Mick McCarthy says how Cardiff City overcome the disappointment of the home defeat by Nottingham Forest will decide if they win their play-offs fight.

The Bluebirds job of making the top six is a lot harder after the 1-0 home defeat to a stubborn Forest side, with James Garner’s first half goal  enough for the visitors to claim all three points.

“We’ve got to get in tomorrow morning, the ones who haven’t played and the ones who played will recover and it depends how deeply they see it.”

City struggled to get into the game in the first half with Forest taking the lead thanks to a well worked play down Cardiff’s left was crossed into the box to a free Garner who slotted the ball nicely past Dillion Philips.

“Classic game of two halves,” added McCarthy. “I would say they were better than us in the first half and managed to get the goal, that was the difference.

“They probably deserved it in the first half from their performance, we didn’t really get going, as well as we have done recently.

“Then we had a great reaction in the second half, I think we were the best team but did not manage to get to a goal.”

McCarthy was up against Chris Hughton and he knows the struggles his team would face going up against a side managed by his good friend and scrapping for points.

“I know Chris’s teams are hard to break down and I saw them at Brentford two weeks ago and they were a really tough nut to crack if they got the first goal.

“If we scored the first goal, they would have known exactly the same, because we’d be hard to break it down.”

Cardiff’s best chance of the game came through Leandro Bacuna wose shot was hit just wide of the post.

The Bluebirds recorded three shots on target with just over half of the possession.

“We have all the ifs and buts, but that didn’t happen. We just didn’t have that little bit of luck or a bit of quality that they had to finish it. But it’s not happened today. So, it’s ended up being a disappointing 1-0 defeat.”

The visitors only recorded one shot on target the whole game, but they were the team which were clinical and defended well in the second half not allowing Cardiff many chances.

McCarthy, who was looking for a victory to follow up the win at Swansea before the international break, added: “You’ve got to give Forest a little bit of credit. They played well, we couldn’t get to grips with it, really get closer to them and stop them.

“Maybe the fact that they’ve been away so many players, some have trained, some haven’t that much.

“There have been players being away on international duty and maybe just fragmented are saying beforehand that let’s get up to the standard where we’ve been, we just didn’t, I’m not gonna make your excuses for it.

“Whether we did enough to create any clear cut chances to earn something. I don’t know. But I know they’ve barely had a shot at the goal in the second half, we were currently the better team.

“So, I’m going to Sheffield Wednesday and try and replicate the second half and not the first half.”

Cardiff travel to Wednesday on Monday still four points off the top six though Bournemouth have a game in hand.

They will hope for a better performance but are likely to again be without captain Sean Morrison who missed Friday’s game with a calf strain.

“Still a doubt for Monday and we’ll have to see about next Saturday. So, he’s a big loss for us. But I have to compliment Ciaron Brown for his performances and Tom Sang lads who have come in and Joe Ralls left wing-back and they’ve all done great.”

Despite the defeat against Forest, Mick McCarthy will be hard at work, trying to get his team ready for the remainder of their games and fight for that play-off place.

“I will certainly be back at it tomorrow making sure that you’re getting the positive atmosphere around the place.

“On the back of all the performances we’ve had recently and the win and only been beaten once prior to today. There are more positives around here rather than negatives, that’s for sure.”