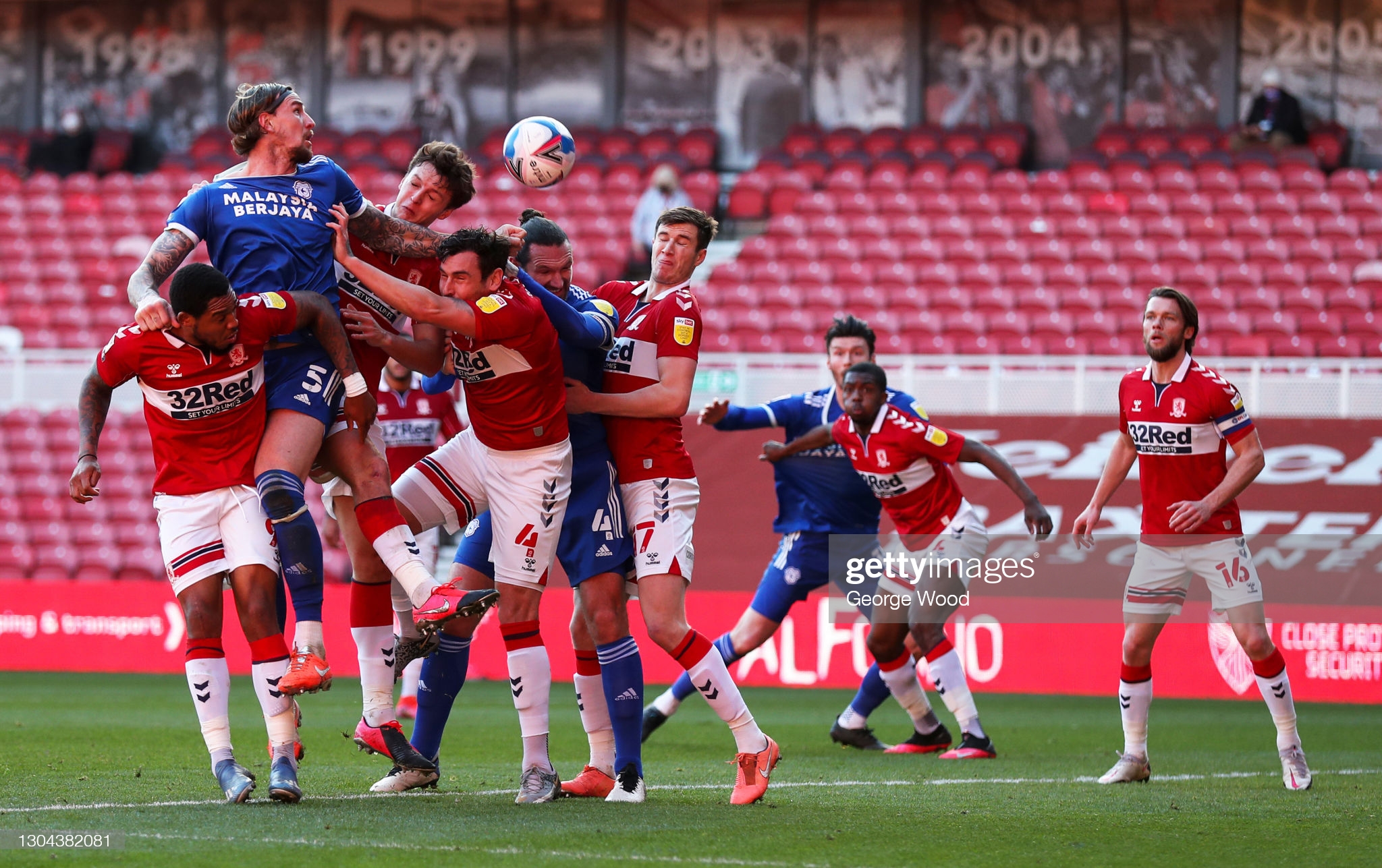 Sean Morrison gets a head to will Vaulks's long throw to put Cardiff City ahead. Pic: George Wood/Getty Images

Mick McCarthy saw Cardiff City’s bid for a seventh straight league win dashed – but he was more than happy after taking advantage of ‘Warny’ ball.

The Bluebirds took the first-half lead as skipper Sean Morrison netted from a Will Vaulks long-throw against former boss Neil Warnock’s Middlesbrough.

And though Paddy McNair’s late leveller cost City their place in the play-offs McCarthy was happy with a point that extended his unbeaten part to nine games – and he had a perfect response to his old pal Warnock.

“Warny had all those in my team when I used to play against him (at Ipswich Town), he used to launch everything in the box,” said McCarthy, who has been pals with Warnock since he used to clean his boots at Barnsley 44 years ago.

“He said something to me about that and I said, ‘Well you bought them all, they’re your players!’

“We are fighting fire with fire and it is a really good weapon, that throwing, and it has always been a good weapon, whether it be Rory Delap or Will Vaulks.

“It’s hard to defend because it comes in flat, but we made the most of it.

“He was just complaining, he always does, he’s like me. We’ve known each other for years.

Warnock has been full of praise for McCarthy’s start as City boss lifting the side from staring too close to the relegation zone to one that has a good chance of the top six.

“He just said ‘well done’, not just for today, but for the way it’s gone for me at Cardiff,” added McCarthy. “He promoted me to take the job when he was leaving, which was good of him.

“I’ve been mates with him for a long time. He has whinged and moaned and groaned for 90-odd minutes and I’ve done exactly the same!

“I don’t think either of us could say that was a nice, gentle game of football. Because it wasn’t, it was a scrap.”

Morrison’s header came against the run of play against their promotion rivals but it took McNair’s late effort to deny them another three poiunts.

City slipped to seventh but are just two points behind Bournemouth who regained sixth place with victory over watford while in-form Barnsley moved into seventh after seeing off Millwall.

“We have gone on a six-game winning streak, do you ever think that’s going to happen?” added McCarthy, happy with a point on their travelks.

“It’s wonderful. But we have consolidated that with a really hard-earned point here, having played away on Wednesday night.

“I would have taken it.

“I think a draw was fair, yes, I couldn’t sit here and say we deserved to win the game.

“I can sit here and say we should have won the game from that position.