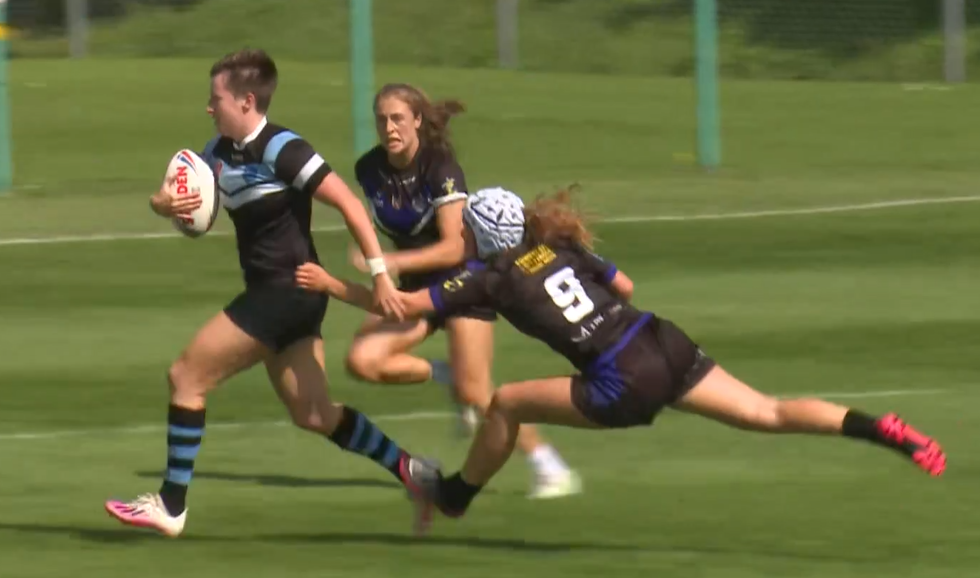 Shaunni Davies scored a try for the Demons in the victory over the Broncos. Pic: Wales RL

An injury to Cardiff Demons and Wales captain Shaunni Davies on 75 minutes meant that it was a premature end to this hard-fought Betfred Women’s Super League South semi-final, with the result standing.

Davies was injured in a legitimate tackle and unable to be moved, so there was no chance of restarting the game.

After scoring 54 tries in their last three games, the Demons knew they were in a match for the first time this season, but did enough in the first 20 minutes to secure the victory.

Lowri Norkett, with four tries per game so far this season, raced away for the opener after just 30 seconds. Davies converted.

Ffion Lewis set up Leanne Burnell for the second try on six minutes, scoring under the sticks to make the kick easier for Davies.

Burnell quickly went over for her second, this one going unconverted, but Davies made up that by scoring a superb individual try on 13 minutes. For the second kick in a row, Davies hit the post so the score remained on 20-0.

You can watch live at https://t.co/2KaDtNcTXI

Cardiff didn’t even make their first error until 21 minutes. A dropped ball gave London a chance for a try back and they didn’t waste it. After winning a second set, Vicki Jackson fed Jamie Blazejewski to go over to break their duck. Wales international vice-captain Kathryn Salter converted.

They got another try back after winning a goal-line drop-out. Iona McClusker, not long off the bench, stormed over, with Salter failing to convert.

But it was Cardiff who went into half-time on the ascendancy after Burnell shook off all challenges to ease through the centre to claim her hat-trick. Wales 100th dual code international Ffion Lewis converted on the hooter to put the half-time score on 32-10.

London scored first after the break. It took just 90 seconds for Emelie Hellgren to force her way through. Courtney Trecco’s kick sailed wide.

The next score was going to be very important and it came to Cardiff. Lewis opened a gap for Norkett who sprinted 50 metres to put the ball under the sticks for their seventh try of the game.

London nearly got another try back, but Salter was held up over the line, and the Broncos defended well too, as Cardiff looked to cement the win with an eighth try.

The Broncos kept the Demons out for two successive sets before Davies’ injury dampened any victory celebrations.

Cardiff Demons now take on the British Army in the final in London in two weeks’ time.