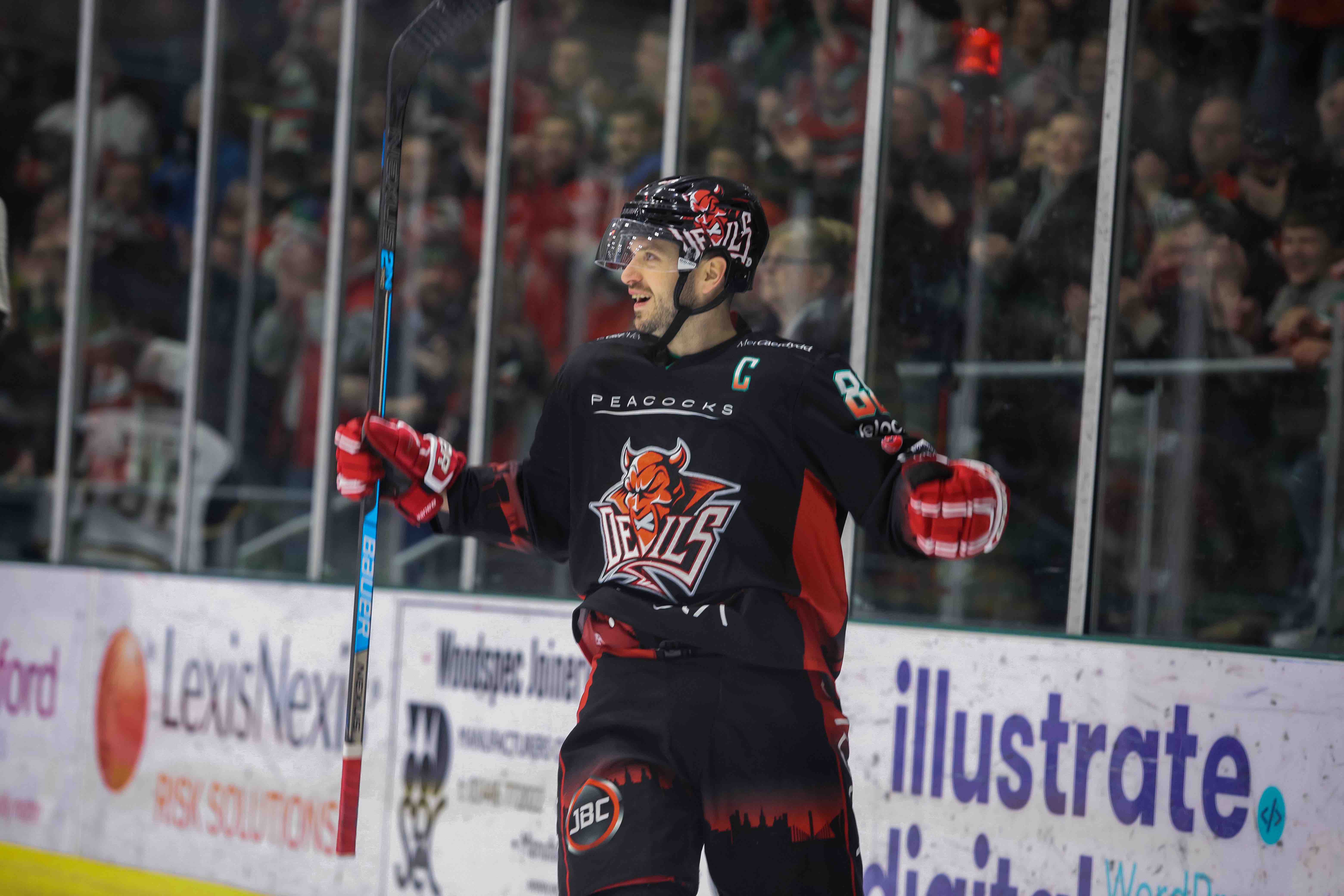 Joey Martin says he will return to Cardiff for the 2021/22 season. Pic: Rebecca Brain

Cardiff Devils skipper skipper Joey Martin says he will return to the club after being given permission to play in Norway for the 2020/21 season.

Martin is joining Stavanger Oilers amid the uncertainty of the forthcoming EIHL season caused by the COVID crisis.

But the Canadian – one of the club’s key players for the past six years – will return for the 2021/22 season having only just signed a new two-year deal.

“The opportunity to play for a great club like Stavanger for a season really excites me,” said Martin.

“They are in the Champions League this season, which is going to be a fantastic experience. They are known to treat their players very well and run a first-class organisation, which sounds similar to what I have had in Cardiff.

“I am looking forward to getting over there and back on the ice in the next couple of weeks.

“To the Devils fans, I know this will seem like I have given up on being a Devil, but it is not the case. I love Cardiff and I will be back next season. I love you guys, you are a huge reason why I have been a Devil for 6 years and why I want to be back in 2021-22.”

“To the Devils fans, I know this will seem like I have given up on being a Devil, but that's not the case. I love Cardiff and I'll be back next season. I love you guys, you are a huge reason why I have been a Devil for 6 years and why I want to come back” – @JoeyMartin14 pic.twitter.com/9YQ3U3m707

The 32-year-old had only just agreed a two year deal, but like other players had been given permission to look abroad for playing opportunities given the uncertainty around the game in Britain at the moment.

“Joey Martin deserves more than a simple press release but we are not treating this as a departure from the club and neither is he,” said managing director Todd Kelman of a player who has been named to the Elite League First All-Star Team five out his six years, won the EIHL Forward of the Year three times and the League’s Most Valuable Player Award twice.

“This is a year out due to this pandemic.  Joey is on a two year deal and he intends to be back with us for the 2021-22 season.

“I actually wrote to all our guys just over a week ago. Not just the guys we have already signed but the guys we were intending to bring back if the 2020/21 season was starting on time.

“I explained that the Elite League board are working very hard to try and start in December but we are at the mercy of government regulations relating to indoor events with crowds.

“I told all of them that if they want to look around for jobs in other leagues that have confirmed they are going ahead before our league, then we would support them in their decision and would help them with references or finding agents.”

Kelman insisted that the Elite League was striving to get some sort of season started over the coming months and it could be extended into next summer.

He added: “I want our fans and the fans around the league to know that the Elite League teams are doing everything we possibly can behind the scenes to get the season started in December.

“We are speaking to the right people in government, we have a return to play plan but no matter what, we are at the mercy of government decisions on indoor events.  We all want to play starting in December but our deadline to proceed is creeping up on us.

“I am pretty certain every team have had similar conversations with their players, whether they have announced guys or they have just signed guys but not made it official. Nobody wants to see guys out of work and if that means we lose some players now before we know the fate of our own league, well, we still feel that morally it is the right thing to do.

“There are teams in this league, including us, that are exploring options if we have to start later than December whether that means starting in January or February and playing into May or June, we will pursue every opportunity to have hockey in Cardiff at some point over the next few months.”