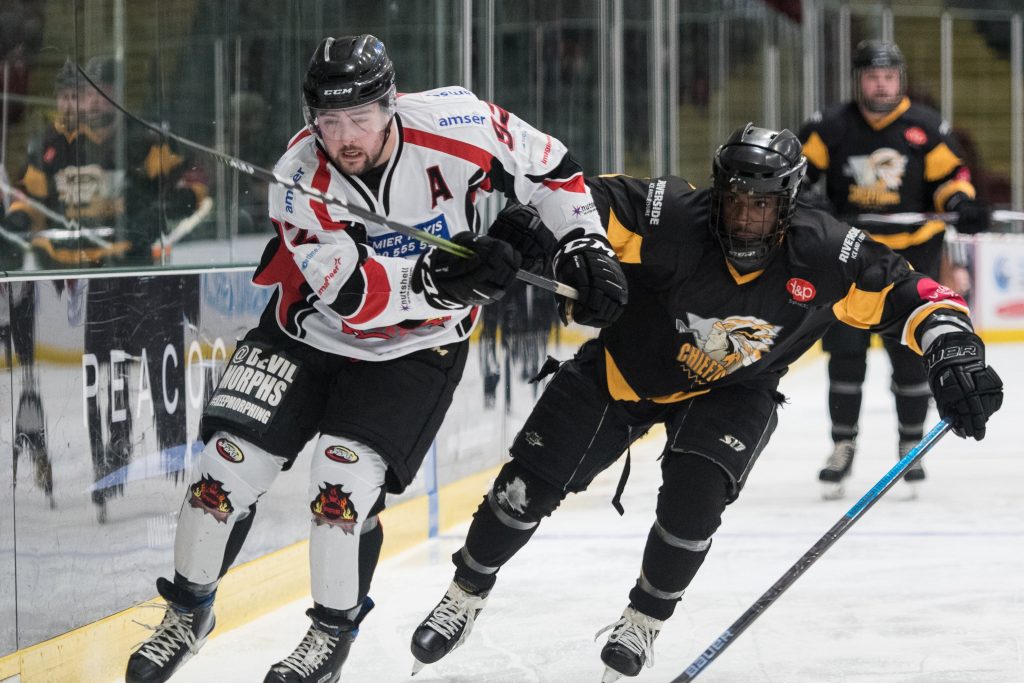 Josh Haslam, a veteran of almost 250 appearances for Cardiff Fire, has committed to the club for the 2019-20 season which starts this month.

Cardiff-born Haslam has played senior hockey for Fire since the age of 16. He is now 24-years-old and has played 242 senior games, scoring 121 points. The 6ft 1in centre Haslam has been part of two league title winning Fire teams and coach Mark Cuddihy says: “I have had Josh with me for nine years now.

“He joined us from the Cardiff junior programme. A big guy who is really quick when he gets his feet moving.

“Josh had his best season in 2014-15, playing at National League Division One level, scoring 20 points in 29 games.

“He has worked really hard this summer on his conditioning and we are hoping he hits the ground running. He has fantastic ability, natural talent and we’re looking for a breakout season this season.

“Josh is a player who can lift the room when needed.”

Cuddihy has made major strides in recruitment for Fire and Welshman Ben Smith rejoins for another season, having first linked up with Fire in 2017 from Cardiff’s under-20 team.

“Ben is only 21-years-old and during 2017-18 made the switch from forward to defence and spent the whole of last season on D. Another player who is more than six feet tall, has quick feet and moves the puck well.

“Ben made the switch to D full-time last season, having previously played there on occasions in junior hockey,” said Cuddihy. “He is in really good shape and is getting better and better with each season.

“Ben played 12 games in NIHL One in his first season of senior hockey and handled himself well. At only 21, Ben’s best hockey days are ahead of him, he is extremely coachable, works hard and is a great player to have in the room.”

Defencemen Joe Morris and Tom Smith return to Fire for next season.

Morris has been playing senior hockey since 2011, when he was 16-years-old, and, despite being only 24-years-old brings a ton of experience having played in 221 matches at NIHL level.

He captained Cardiff under-18’s to a national championship in 2012-13 season, while also playing NIHL hockey at Division One and Two levels. He was a league champion with Cardiff Fire during the 2016-17 season.

“Joe has great experience for somebody so young,” says Cuddihy. “Joe has constantly put up decent numbers, finishing fourth in scoring during the 2017-18 and also finished joint top scorer for a defenceman in last seasons Fire team.

“Joe is another popular guy in the dressing room and is mature beyond his years.”

Veteran D-man Smith rejoins Fire, having joined them last season after having a spell living and playing in Canada.

He first joined Cardiff’s ENL/NIHL team in 2007 and played for six seasons before heading out to Canada for a work opportunity.

Tom has played more than 100 games for Cardiff at senior level and has previously captained the club.

“Tom is a disciplined D-man who plays his end first and takes pride in his defensive work,” says Cuddihy. “He hits hard, makes good plays out of our zone,  has a good knowledge of the game and could easily become a coach.

“He is also one fo the best dressing room guys I have ever worked with, a real team first player.”

Forwards Lewis Stevens and Cameron Basnett return to the Fire. This will be Stevens third season with the club, while 23-year-old Basnett will is beginning his second season with Fire.

The Guildford trained player was also in Cardiff University’s team and scored 41 points in 26 games.

“Both Cameron and Lewis are young players with good energy,” says coach Cuddihy. “Cameron played both forward ad defence last season and is comfortable in both positions.

“He is good defensively and has a good hockey brain. He had good grounding in Guildford and puts maximum effort in every shift.

“Lewis is a livewire who likes to play the game with a bit of an edge, enjoys the physical side, works hard and has made big improvements in his overall game over the last two years.

“He is only 21-years-old, brings a lot of energy and loves the game. He is eligible to play in both the Fire One and Two teams this season and is looking forward to playing as much hockey as he can.”

Cardiff-trained Sam Bryant, who is from Caerphilly, started his career in the Cardiff junior set up before stepping up to senior level in 2014 and he has committed to the club.

Bryant has been an extremely important player to Fire since winning a league championship in his first season. He had his best season in terms of point production in 2018-19 when he scored 18 points in 21 games (8+10).

“It’s great to have Sam back,” says Cuddihy. “Sam is my kind of player, never gives up and chases everything from the start to the finish with high energy. “He’s quick, gritty and seems to score important goals. Sam is a key guy in the dressing room, a player you can trust in all situations and is highly effective on the penalty kill.”

Iwan Davies, Elliott Murdoch and Morgan Evans return to Fire. All three players came through the Cardiff junior system and will all start their third consecutive season with the club.

Davies, aged 20, Newport-born Murdoch, 21, and teenager Evans, from Cardiff, will all be eligible to play for both the Fire NIHL South One team and at development level because they are all aged under 23.

“All three are key to the future of our club and have really developed since playing senior hockey,” says Cuddihy. “Iwan has worked really hard this summer, has one of the hardest shots in the team and knows where the net is.

“He showed how much he developed last season by playing both forward and defence, scoring six goals.

“It’s clear he has he has put in a lot of work over the summer and I believe he’s going to have his best season for us so far. He is on the ice pretty much every day and that dedication is really starting to show.

“Morgan is quick with good energy and also had a good season in 2018-19. He has always put up decent numbers in juniors and finished his last season of Under-18 hockey as the leading scorer with 38 points in 11 games, while stepping up to play senior hockey in NIHL One and Two.

“That was his first season as a full-time senior player and his confidence growing.

“Morgan was also voted young player of the year for us.

“Elliott is the oldest of the three, a big character in our dressing room with decent speed, energy and toughness. He is the kind of player who can slot in on any line and play in multiple roles for the team.

“He also sticks up for himself and his teammates when needed. I am expecting Elliott to kick onto another level this season as he really grows into senior hockey.”

Murdoch will be sponsored by Sammy’s Barbers of Newport.