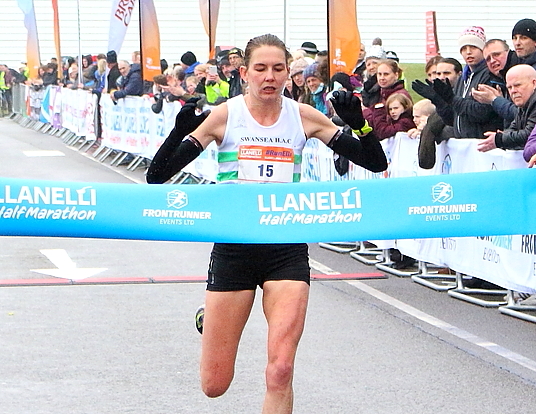 Commonwealth Games athlete Caryl Edwards celebrated her return to competitive running on Sunday with a win after a two-year break due to the birth of her child.

Edwards, formerly Jones, had not competed since the Cardiff Race for Victory 5K in May, 2019, but on Sunday she won the women’s race in Round Two of the Welsh Athletics 5K series at Pembrey.

The athlete who finished eighth in the marathon at the 2018 Gold Coast Commonwealth Games raced away on the fast, flat closed road circuit near Llanelli to win in a time of 16.54 – just outside her road 5K personal best.

The Swansea Harrier finished ahead of Alaw Beynon-Thomas, of Les Croupiers, in 16:59 and Chloe Dooley, of Cardiff Athletics, who clocked 17.41.

Edwards said afterwards: “It was great to be back racing. I’ve been away from the sport for a while but now I’m settling back into training after having a child.”

There were also three seeded men’s races, the fastest of which was won by another Welsh Commonwealth Games marathon runner Josh Griffiths, of Swansea Harriers, who crossed the line in 14.26.

The victory followed up Griffiths win in the first round of the series back in May.

Second on Sunday was his Swansea team-mate and namesake Dewi Griffiths, who clocked 14.40 in his first competitive outing since finishing fourth at the British Olympic Marathon trials in March.

Griffiths, who represented Great Britain at the 2017 World Athletics Championships in London, said afterwards: ‘It was great to have another event in Wales, on a bigger scale than at the first fixture but still safe and really well organised.

“From a personal perspective it was nice to get the win. The time wasn’t super fast but it’s all good as speed work before I get into a marathon bock of training ahead of the autumn.

“It was nice to share a metaphorical podium with Dewi and Mattie and great to see Caryl back racing against Alaw in the women’s race.”

The men’s second race was won by Scott Williams, of Neath Harriers, who clocked 16.22, while race three was won by Ogmore Vale’s Jacob Tasker in 16.52.

The previous day saw another Welsh 5K Series event was held in Rhyl.
The men’s race was won by Under-20 athlete Bryn Woodall, of Colwyn Bay, in 15.15, ahead of Raymond Clark, of Wallasey AC, in 16.21 and North Wales Road Runner Jonathan Kettle in 16.30.