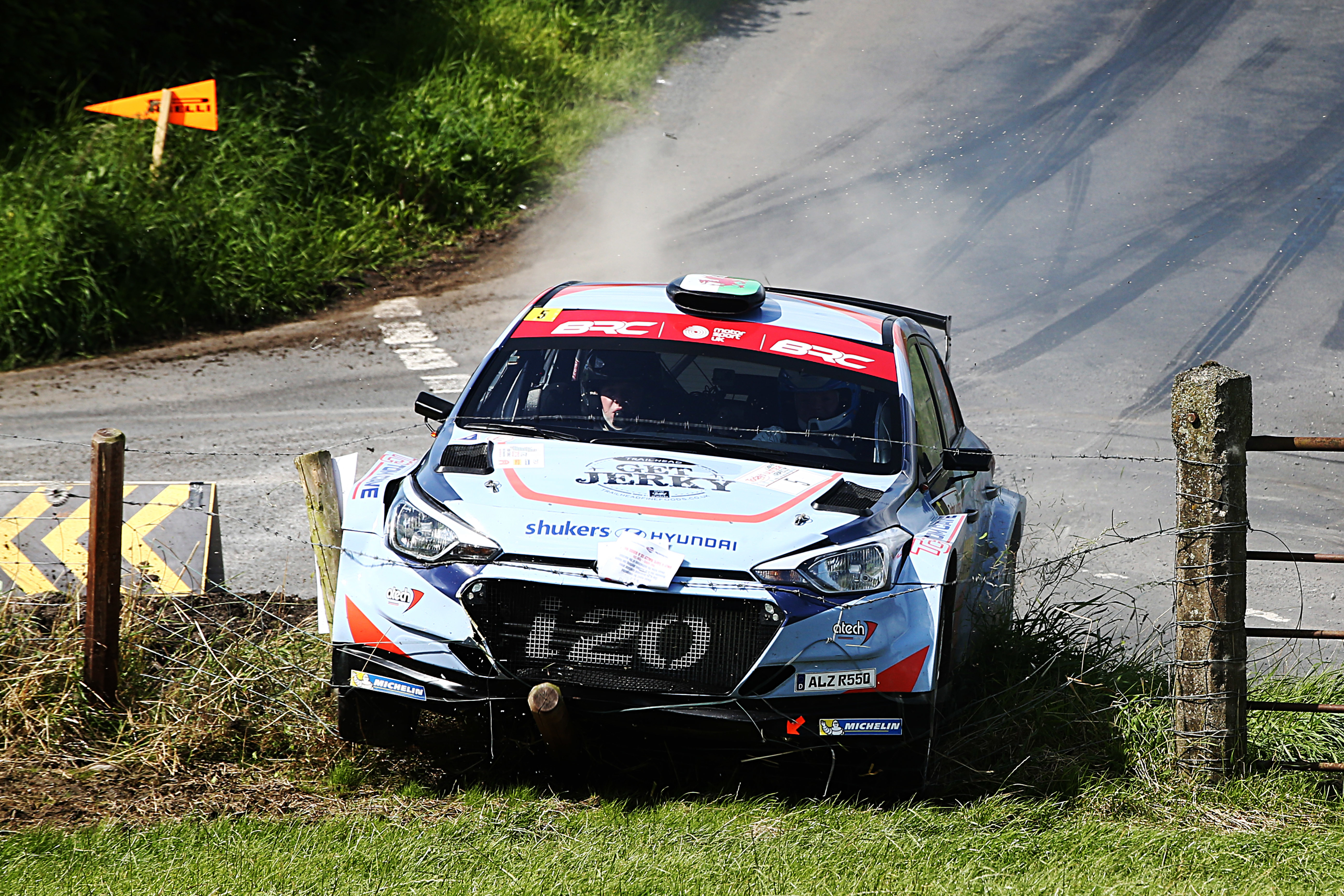 Tom Cave crashes through a fence on the Ulster Rally, shortly before a collision with a wall ends his run.

Tom Cave admits that it will be ‘extremely tough’ for him to win the British Rally Championship title, after crashing out of the Ulster Rally.

The 27-year old had gone into last weekend’s Ulster Rally tied for the lead of the series with Matt Edwards. And their close battle continued on the bumpy closed roads in Northern Ireland, as just 9.8 seconds separated them after the first loop of stages.

An overshoot into a field on SS5 cost Cave and co-driver Dale Bowen precious seconds, but an overall fastest time on SS6 did much to restore some of the deficit. However, the gap between them and Edwards was now 19.3 seconds, which meant that a return to the softer tyres and a consolidation of positions was the order for the final loop.

But when it comes to rallying, the best laid plans don’t always come to fruition and on the approach to a high-speed left hand corner near the end of SS8, Cave felt the car slide a little wider than it had done before. Whilst he straightened it up for the exit, a section of a wall that jutted out caught the front corner of the car, removed a wheel and spun the Hyundai around in the road.

Thankfully both crew members were unharmed, but the same could not be said for their car and they had no choice but to retire on the spot.

“I really didn’t think we were going to hit the wall, but the last bit of it stuck out further than the rest and although we just clipped it, the outcome was terminal,” explained Cave.

“Of course, it’s disappointing to end the rally that way, but if we hadn’t been on the front-running pace it would have been even more disappointing, so we certainly take away some positives and I congratulate Craig [Breen] and Matt [Edwards] for the overall and BRC wins respectively.

“Once again, the PCRS team provided us with a car that was competitive and reliable – as it has been all season – although what happened in stage eight was not the best way to show our appreciation of their fantastic efforts, of course.

“With just one round of the British Rally Championship to go, it’s going to make it extremely tough to claim the title. However, we shall still give it our best shot.”

The sixth and final round of this year’s British Rally Championship takes place on 14 September and sees the surface return to gravel for the Dalbeattie and Castle Douglas-based Galloway Hills Rally.