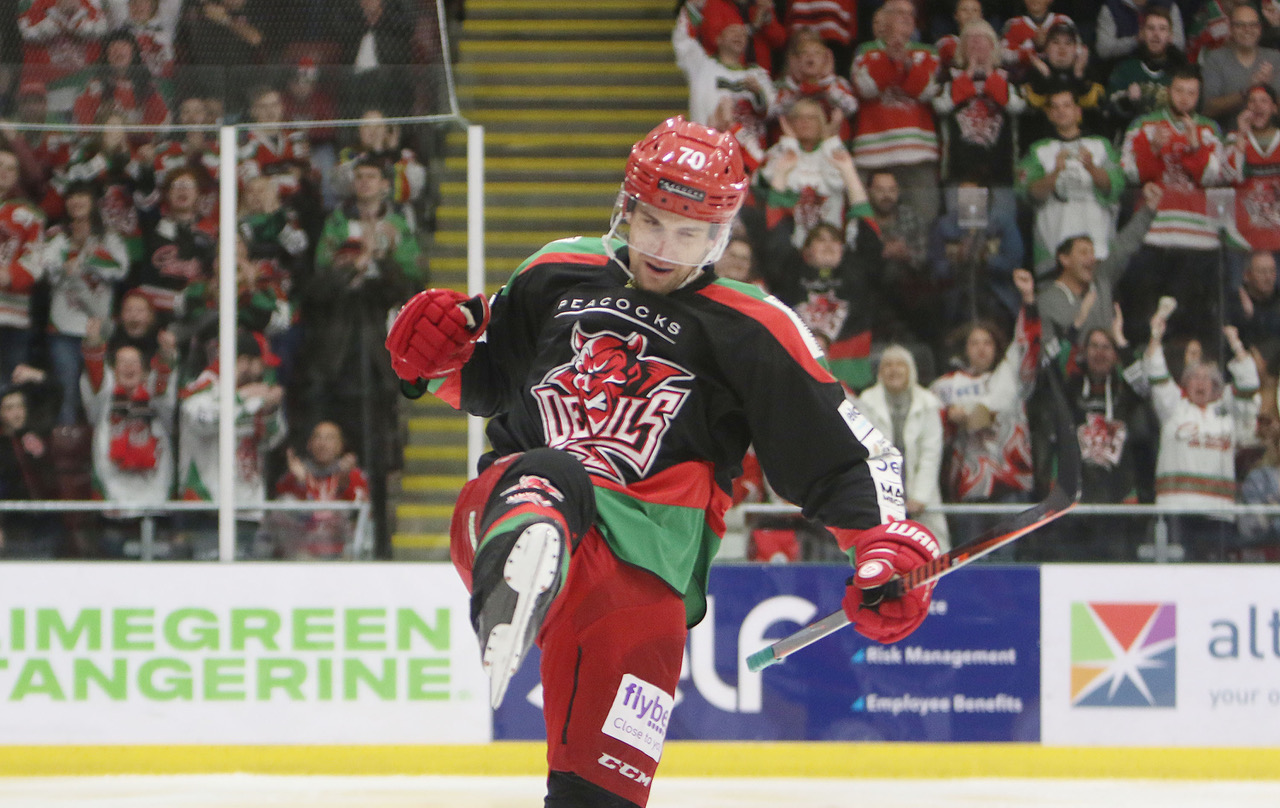 Andrew Lord has been tweaking his Devils lines during the build-up to their Champions Hockey League match against Swedish title winners Vaxjo Lakers this evening (Tuesday, 7.30pm).

Coach Lord, assistant Luke Piggott and his leaders in the dressing room are constantly assessing how things are going on the ice.

Devils, Elite champions for the last two seasons, have produced some powerful performances in European matches and been edged out by some of the best teams on the continent.

Captain Jake Morissette and his players have also made a storming start to the domestic season, pressing hard in league and cup.

Devils have won four successive Challenge Cup group games to clinch their place in the quarter-finals and are pushing hard in the Elite table with six from seven matches.

Seems like an appropriate day to dig out this CHL interview after the @cardiffdevils win against Växjö last year https://t.co/EzabFLoY54

“I like our lines,” said Lord. “Ulmer, Mo and Linglet started on fire a few games back, but maybe cooled a bit.

“Haddad, Dixon and Hedden were okay, but not quite at their best. We always have back-up options and went for it

“Dixon played with a ton of energy, while Linglet and Hedden on the wings were great playing off the rush speed.

“Ulmer, Mo and Haddad have played serious minutes together over the year and produced arguably the best shift of the season before the Mark Louis goal against Dundee last Saturday.”

Lord has said he would give just about anything for a first Devils CHL win in this season’s campaign, having won twice in 2016-17.

There is no question Cardiff have stepped up their European performances this time, but have had little luck and were edged out 3-1 in Vaxjo a week ago with a goal in the last minute clinching Lakers’ victory.

A year ago Lakers came to Cardiff Bay and Devils produced one of their best team displays in the club’s 30-plus year history, winning 5-1.

The Swedish visitors will be out to ensure that doesn’t happen again, while Lord says: “I’d love the Red Army to come out and get behind the players.

“We are going to need it against one of the better teams i in Europe.”

Tickets are on sale for Devils’ three successive home fixtures. They play Lakers tonight (Tuesday) in the CHL (7.30pm) followed by Sheffield on Saturday (7pm) and Fife the next evening (6pm).

All three fixtures are at Ice Arena Wales.