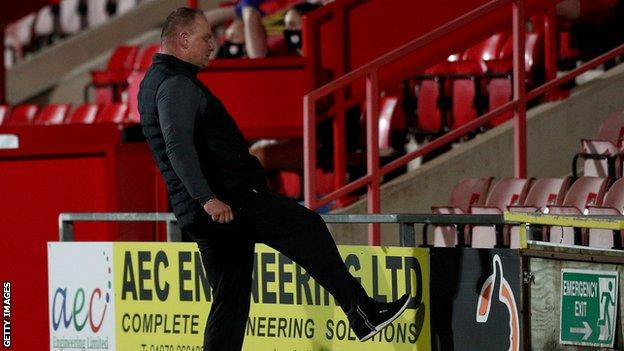 Andy Morrison is saddened that his ‘turn a blind eye’ comments after Connah’s Quay Nomads Europa League defeat by Dinamo Tbilisi were taken out of context.

Morrison said after the heartbreaking loss on Thursday – to a penalty seven minutes into injury-time – that several of his players had not been feeling quite right.

But the Nomads boss – and the club – had reiterated today that this was NOT a reference to the fact that three players had tested positive for COVID-19 and were self-isolating.

“It was tragic and so cool, but that’s football,” said Morrison of the result against the Georgian champions.

“I was referring to the hurdles we had to climb and the problems we faced before the game and again on the match day there were players who were not quite right for various reasons.

“For them to put in the performance they did was remarkable, beyond anything you could have dreamed of. To take a team like that to the 95th minute and lose on a penalty was heartbreaking.

“Those were the points I was making and referring to but sadly they’ve been turned around and made to look in a different light which is a shame because it takes away a little bit away from the effort and performance of the players.”

Morrison and the club – via a statement – have also said that all players were tested before Thursday game and anybody showing symptoms of COVID-19 would not have been allowed into Wrexham’s Racecourse Ground.

“Everyone who was in that changing room could only be there if they had passed a Covid test and gone through all the protocols,” added Morrison.

“They were tested for their temperature so they wouldn’t have been in there if there was something wrong with them. Match day situations arise and that’s what it was.

“It’s been twisted round and made to look in a different light, but I’m not accountable for that. If that’s what someone in the press wants to do to get a story, then so be it. I know what we were referring to and I think anyone who has been in the game or managed would understand my point of view that there are certain things you can’t get distracted by.”

In an interview after the game, Morrison said: “Three lads have turned up tonight and they’re not well.

“And it’s like ‘lads, I don’t want to hear it. I can’t hear it tonight that you’re ill… let’s just get through it’.

“I’ve been told that before the game and we’ve had to turn a blind eye to it and then you would have never noticed that anyone there tonight wasn’t feeling great.”

A Nomads statement said: “Ahead of kick off, it was public knowledge that we had received three positive Covid tests with one additional player showing symptoms with all four being immediately self-isolated.

“On Thursday, our backroom staff worked diligently alongside Public Health Wales, FAW and UEFA to ensure that the fixture would go ahead with all three governing bodies acknowledging that the club had followed all required protocol.

“This included all of our available matchday squad and staff completing the industry recognised Benchmark54 App before midday of the game which asks an 11 question questionnaire regarding health and Covid symptoms – all of these came back negative. Additionally, everyone was temperature checked upon arrival at the stadium.

“In a post-match interview with various media outlets, manager, Andy Morrison used the term “turned a blind eye” which has unfortunately been misconstrued by many to mean that as a club we ignored Covid regulations.

“We would like to go on record and say that this is categorically untrue and that what the manager was referring to was a number of players who may not have played had we had a fully fit squad.

“Morrison clarified this in a tweet on his own personal Twitter account, indicating that a number of players had suffered from isolated pre-match upset stomach and headaches likely down to nerves due to being thrust into the starting lineup of such a high profile fixture.”

Morrison added his main concern now was getting his side ready for Sunday’s Cymru Premier League clash with Penybont.

He added: “At the moment we’re waiting on what players picked up knocks last night. I’m sure we’ll get a better idea on that by the end of the day.”