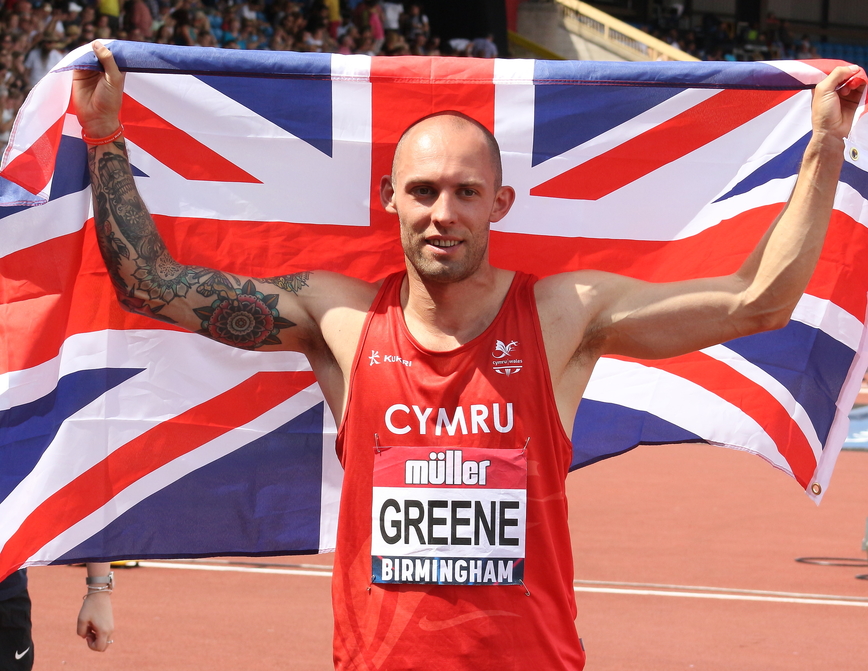 Welsh hurdles legend Dai Greene will be among many of Wales’ top athletes heading for Manchester this weekend to compete at the Muller British Athletics Championships.

With domestic meetings at a premium and some major events having fallen victim to COVID-19 restrictions, the two-day competition will be the highlight of the summer for many athletes.

As a result, there will be an array of British stars who have shone at the Olympics, Paralympics and World Athletics Championships on display at the event being held behind closed doors.

Almost 40 Welsh men and women have accepted invitations to compete at the championships, which will be screened live on the BBC on Friday evening and Saturday afternoon.

Some Welsh athletes have withdrawn due to a clash with other competitions, injury, or a lack of opportunity to compete and prepare due to lockdown and subsequent restrictions.

The championships were supposed to serve as Olympic trials in June but have twice been pushed back because of the coronavirus pandemic.

However, the line-up at the Manchester Regional Arena is due to include three Welsh world champions in the shape of 400m hurdler Greene, thrower Aled Sion Davies and shot-putter Sabrina Fortune.

Swansea Harrier Greene will be hoping to regain the British 400m title he last won in 2018, while Davies and Fortune will be warming up for next year’s Paralympics.

Davies will have plenty of Welsh company in the men’s shot put on Saturday when he will be joined by Newport’s Daniel Cork, 2019 World Para Championships bronze medallist Kyron Duke and former British Championship medallist Gareth Winter.

Another event stacked with Welsh talent is the men’s 100m, where the nation’s sprinters have been enjoying some excellent form since athletic competition resumed.

Cardiff AC speedster Jeremiah Azu will be competing at his first senior outdoor British Championships and is feeling confident, despite a number of disruptions over the past year.

Last season had promised so much when he posted a blistering personal best of 10.27 in May.

But his season was cruelly cut short when a hamstring injury struck while he was leading the 100m final at the European Under-20 Championships in Sweden.

Then came the COVID-19 shutdown which threw this summer’s athletics season into disarray across the globe.

However, Azu feels he is getting back on track and is looking forward to competing in Manchester. “It’s been a bit of a weird year, until recently I wasn’t too confident, but I ran pretty well at the weekend so I’m feeling a bit more confident going into it.

“I executed my race how I wanted to, so I’m looking to go there and anything can happen. I go in with an expectation, I’m not limiting myself, I’m going to aim as high as possible.

“I was injured last year, but I had been working on strengthening my hamstrings. I felt that I could have run well this year but there wasn’t anything to run and it’s been difficult training the whole time.”

Azu is disappointed there will be no crowd in attendance, but says it shouldn’t affect the athletes too much.

“Most races haven’t had spectators but for a championship it’s going to feel quite weird,” he says.

“The crowd normally adds to all the emotions. So, without it, I don’t think it will be that much of a negative, but it would be nice to have crowds because it makes you work that extra bit harder.”

And he is delighted to see so many fellow Welsh sprinters doing so well – especially with the 2022 Commonwealth Games on the horizon.

“Everyone’s running well, it would have been nice to see how well everyone would be doing if they’d have had full, proper training the whole time.

“We would be even better than we are now. Considering everything that’s going on, everyone has been doing amazing. The strength in the Welsh team now is incredible.

One of the highlights of the two day event will be Saturday’s showdown between British race-walking champions Bethan Davies and Heather Lewis, due to take place on Saturday.

Davies is the current holder of the British 5,000m record and outdoor title, which she retained in Birmingham last summer, while Lewis won the indoor British title last year and is the reigning Welsh Champion.

The javelin is set to see some of Wales’ brightest young talent competing in the shape of Tom Hewson in the men’s event and Neath Harrier Bethany Moule and Birchfield Harrier Bethan Rees, who won a bronze medal last year, in the women’s competition.

Moule is particularly looking forward to competing after missing out on making her debut at last year’s British Champs through illness.

The Commonwealth Youth Games competitor said: “I had my appendix out last year so I’m excited and just hoping in that kind of environment I’ll be able to thrive, even though my training hasn’t been amazing, but everyone’s in the same boat.”

One of the most fiercely contested field competitions is likely to be the women’s long jump, which has attracted a high class field, which includes Welsh indoor champion Sarah Abrams and Rebecca Chapman who set a new PB of 6.54m in winning a silver medal at the 2017 Championships.

Since then Chapman has been hampered by injury and illness, but leapt back to form last month when she registered 6.51m at a competition in Bournemouth, the fifth longest jump by a British woman this year.

Chapman says: “It was a bit unexpected. I knew what kind of shape I could be in, but all the stars had to align for me to get there.

“We were aiming this season, after some testing indoors and outdoors, for 6.30, 6.40 to set me up for qualifying for the Commonwealths.

“But everything came together and clicked, one jump after another it just got better and better, so I’m really happy.

“I quite like being the dark horse, it’s quite nice when you have the pressure off, when no-one really knows what you’re doing, what you’re up to, you can just get your head down and get to work.

“So I think I’ll probably embrace that, the last couple of years have really gone to pot with illnesses and injuries and stuff, so to come out the other end and be injury free, I was so upset to think that we weren’t going to get any kind of season, so any competition is a bonus.

“Jumping in the UK at the moment is so phenomenal, I think it is one of the strongest field events out there, so you know you are going to be in a competition as soon as you step on that track.

“So if I can’t get up for that, I don’t think it matters whether there is an audience or not.”

Over the longer distances, there is considerable Welsh interest in a high quality women’s 5,000m race where Cardiff’s Jenny Nesbitt will line up alongside Bronwen Owen, of Leeds City, who recently ran a 5K PB of 15.45 in Milton Keynes.

There will also be Welsh athletes in both the men’s and women’s 3,000m steeplechase races in the shape of Newport’s Remi Adebiyi and Parc Bryn Bach’s Lauren Cooper.

You can find the event timetable and full list of athletes due to take part in the championships on the British Athletics website.
Live TV coverage starts on BBC 2 on Friday evening at 6pm. While Saturday’s action will be live on BBC1 from 1.15pm. There will also be coverage on BBC iPlayer, the BBC Sport website and the BBC Sport app.