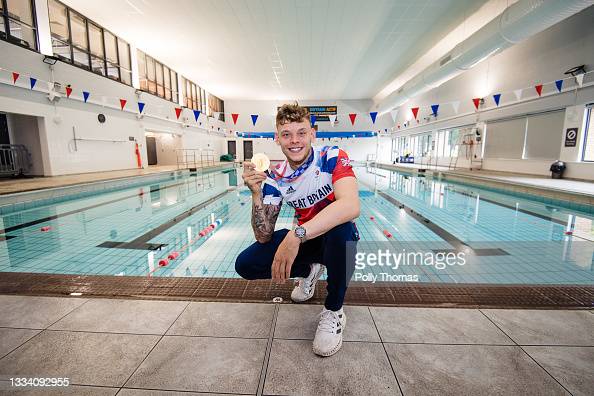 There were highs, lows, new heroes and old faithfuls for Welsh sport in 2021 – but the real story was about survival.

Not just of the fittest, either. To survive as a sports enthusiast this year was all about adaptability and resilience.

Whether you were a Welsh athlete winning gold at the Olympics like boxer Lauren Price, or someone looking for a swim or game of bowls down your local sports centre, determination and perseverance was the name of the game.

Pandemic life became the way of life in 2021. You had to adjust and be resourceful if you wanted to stay on track.

We could begin with Lauren, and her brilliant boxing gold medal at the delayed Games in Tokyo, but maybe the real starting point for Welsh sport should be in a small back garden in Worcestershire.

Caerphilly’s Cabinet unanimously approved a report to recommend that the Council admit the Honorary Freeman of the Borough to Lauren Price and Lauren Williams. @philippamarsden

It was there that Matt Richards spent months before the Olympics in a home-constructed giant paddling pool, swimming for hours each day.

Matt and his dad Simon had rigged up a bungee cord around the teenager’s waist, bolted it to the back wall and created an ingenious treadmill.

It meant he could keep swimming when all the pools were closed during lockdown. Genius. What better story to encapsulate what sport was all about in 2021?

The 19-year-old Swim Wales star’s reward was a gold medal for Great Britain in the 4 x 200m freestyle relay.

If that was incredible, then maybe one of the most moving stories of the year came moments after his team had won.

Four men had stood on the podium, but a fifth had won gold as part of that squad. Matt’s Swim Wales teammate, Calum Jarvis, was presented with his gold by the other four backstage, where, thankfully, there was a camera to capture the moment.

How do you train for the Olympics when Covid has shut swimming pools?

Matt Richards – one of the team who took gold in the men’s 4x200m freestyle relay – attached a harness to the garage wall so that he could swim miles in his paddling pool over lockdownhttps://t.co/YZ9ewNaKgZ pic.twitter.com/QBPqvZsdeA

There were other Welsh triumphs in Tokyo, plus some despair. That’s the nature of sport.

Hannah Mills sailed her way to gold in the women’s 470 class, alongside Eildh McIntyre. It was a second successive Olympic gold for Hannah and her status in the sport was reflected later in the year when she was voted World Sailor of the Year.

But Jade Jones – who was bidding for an incredible third successive Olympic gold – suffered a shock taekwondo defeat and relinquished her Olympic title.

That left Lauren Williams to put Wales on the global map by storming to silver, an achievement the Blackwood battler rightly celebrated but admitted “was not quite the colour I came for.”

Other Welsh medal winners in Tokyo included cyclist Elinor Barker, who took silver as part of the women’s team pursuit.

That wasn’t even her most memorable day of 2021, though. She later revealed she was pregnant and had been when she won her medal!

Tom Barras, who came to Wales to study at Cardiff University, also took silver in rowing in the quadruple skulls, while fellow Welsh rowers Oliver Wynne-Griffith and Josh Bugajski seized bronze in the men’s eight crew.

Leah Wilkinson and Sarah Jones – who have spent years spreading the gospel for Welsh hockey at the Commonwealth Games – finally had a reward at Olympic level, as they won bronze with the Great Britain women’s squad.

But maybe even the mighty Aled was overshadowed this year, by Jim Roberts. The Welshpool wheelchair rugby phenomenon was his team’s tryscoring hero as Great Britain won gold for the first time.

Jim announced his retirement at the end of 2021. Talk about going out at the top.

There was gold, also, for Laura Sugar, the multi-talented athlete who played hockey for Wales became a track and field para-athlete, and then turned to para-canoeing.

She won her KL3 sprint final to join Davies and Roberts as Paralympic champions in 2021.

Jasmine Joyce was also in Tokyo with Team GB, but although she did not win a medal in the women’s rugby sevens, her try-scoring exploits in 2021 made her possibly the most exciting rugby player in Wales.

The @tokyo2020 #Rugby7s match schedule has been revealed. @joyce_jaz‘s women’s team have been drawn against New Zealand, Kenya and Russia.

That’s not a bad endorsement, given that it comes in a year the men’s Wales rugby team won the Six Nations trophy – a first under head coach Wayne Pivac.

Alun Wyn Jones lifted the silverware, which might have been a Grand Slam memory, had the last game in Paris not gone away from them.

Jones then underlined his status as some kind of Welsh superman folk hero by overcoming a dislocated shoulder to lead the British and Irish Lions in South Africa.

Impressive leaders were not in short supply in Wales in 2021. Under the captaincy of Sophie Ingle – a domestic treble winner with Chelsea – and the new managership of Gemma Grainger, the Wales women’s football team showed impressive form and are still realistically placed to achieve a first World Cup qualification.

The prep has started 🇬🇷🇫🇷

The men’s football team – under Robert Page’s coaching and Gareth Bale’s captaincy – are also in a similar situation with a play-off to come in March.

They can also look back with some satisfaction to their delayed Euro finals of this year. It was not quite the fairytale of 2016, but they qualified for the knockout stages – and provided great memories like the win over Turkey – before succumbing to Denmark.

To all these Welsh athletes – and others we may have overlooked – many congratulations and may you have a very happy new year in 2022.