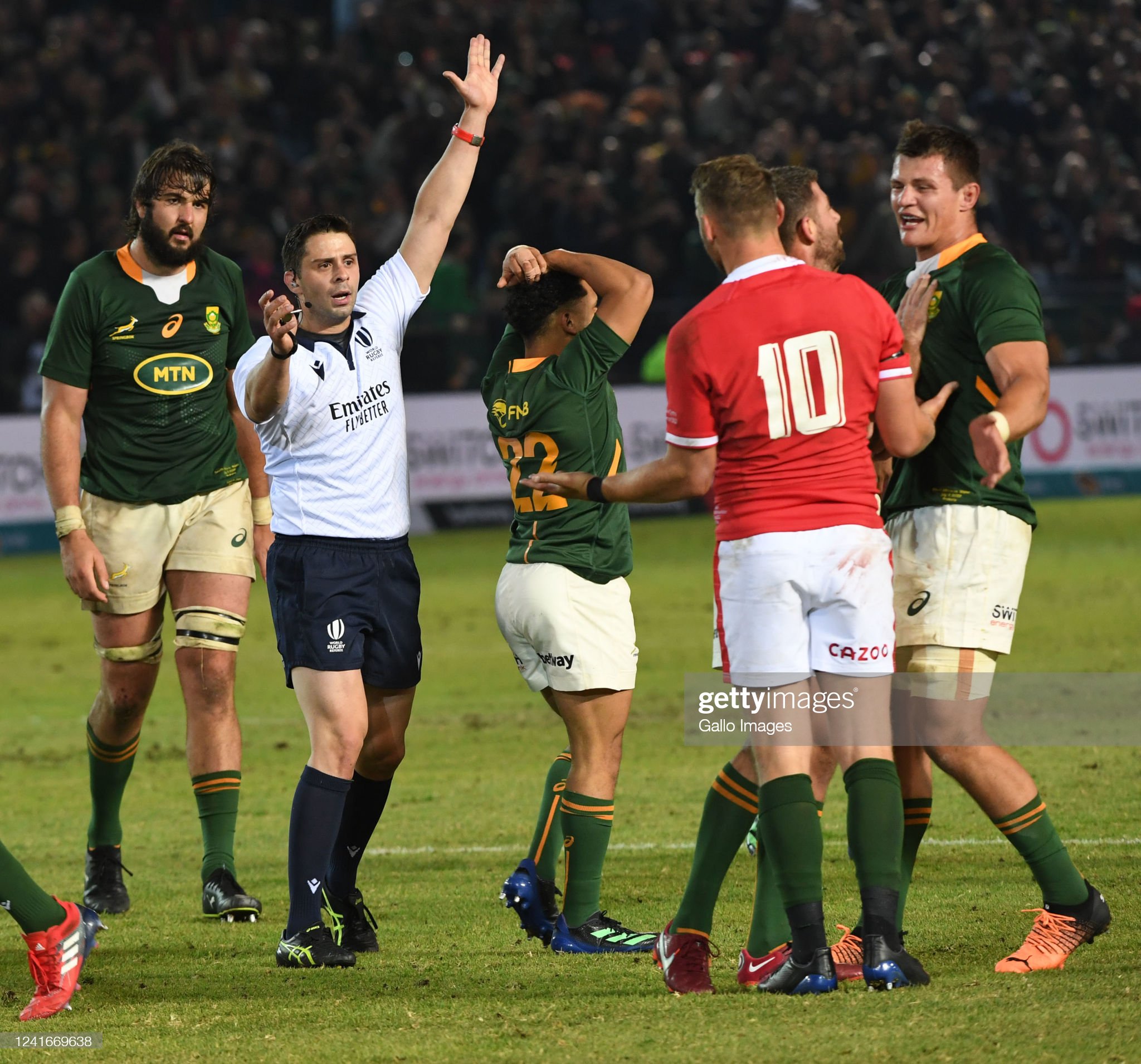 Wales captain Dan Biggar has previously had the somewhat dubious honour of being named among the world’s most hated rugby players.

Last year, the top-five list compiled by the rugby website Ruck.co.uk saw Biggar named No.5, with fellow fly-half Owen Farrell of England named the most hated man in rugby.

Others to make the list were Irish flanker Peter O’Mahony at No.4, England’s loveable former full-back Mike Brown was No.3, and South African enforcer Eben Etzebeth came in at No.2.

Many will no doubt argue that Biggar deserves the No.1 spot, given that his late slap-down gave away the penalty that led to Damian Willemse kicking South Africa to a 32-29 victory.

Explaining their reasoning for picking the Welshman among the top-five most hated rugby players, Ruck.co.uk said: “Biggar is the epitome of players you love to hate – until they are on your team.”

“The way the fly-half continues to moan to referees vociferously has seemingly only got worse throughout his career,” they added.

Dan Biggar got a bit of stick for his shithousery yesterday; I still love him as a player.

Warrior on the pitch, and he is pretty damn good.

There were no post-match beers after the Lions Series but him and Pivac said they were going in after the post-match press conference.

The website also talked about a video mock-up doing the rounds on YouTube entitled: “Birdman”, in which Biggar is mocked for how he raises his arms in frustration at officials.

In the cut-throat world of social media, people will often concentrate on one aspect of a player’s personality or on-field performance in order to drive home their narrative.

There is no argument that Biggar is indeed a Marmite player. But, unfortunately, as a player, he is an acquired taste. You either hate him or love him.

However, those who take issue with the former Osprey’s No.10 style of play and the way he often remonstrates with officials choose to be blinded to the outstanding qualities Biggar possesses.

Those who chose to blame Bigger for giving away a late penalty must have missed the outstanding never-say-die-tie-saving tackle he made on Springbok scrum-half Faf de Klert.

Wales might have been 18-3 ahead with half-time fast approaching, but South Africa are back in the match if that tackle isn’t made. Unfortunately, Biggar was harshly yellow-carded for not rolling away by referee Nika Amashukeli.

Speaking on Sky, Lions centre Jonathan Davies said the Welsh players put the pride back in the jersey and I think that's pretty much spot on. Considering the backdrop to the game, that performance was such a pleasant surprise.

It was the start of several contentious decisions the Georgian referee made, which ultimately proved costly for Wales as Amashukeli issued three yellow cards in the second half.

Amashukeli then awarded South Africa a penalty in overtime when he adjudged Biggar to have deliberately knocked the ball on.

“I thought the penalty at the end was a little bit harsh,” Biggar told a post-match media briefing.

“The ball has just hit my hand, as opposed to me slapping it down. It’s the way it is,” added the fly-half.

It is far too easy to lay the blame at Biggar’s door for why Wales lost last Saturday, but that’s what most have proceeded to do.

In his column, former Wales and British Lions prop Graham Price said: “A psychologist surely isn’t needed to see that stridently taking issue with the man who’s supposed to be in charge isn’t the way to get on his right side.

Wales were heroically good today. Reffell, Rowlands, Lake, Faletau so good. Different universe to the Italy performance. Best bit of all – they got in the Springboks’ faces from first minute to last. As physical a Wales display as I have seen in years.

“There was one point in Pretoria when the Wales No. 10 appeared to be talking in exasperated tones as he sought answers to questions that had been plaguing him. I understand he’s human and can lose his cool like the rest of us, but, equally, a calmer approach can go a long way for a captain in a rugby match.

“The best skippers I played under were Mervyn Davies, Phil Bennett and Bill Beaumont, in no particular order. All of them were able to put their concerns across in a non-confrontational way as if genuinely seeking clarification from referees about areas that were worrying them,” added Price.

While Price is correct to say that captain Biggar needs to adopt a calmer approach when talking to match officials, it was clear that Nika AmashukelI was way out of his depth.

Ref AmashukelI must have been feeling the pressure after the final whistle as he decided to depart the scene without shaking any players’ hands or making eye contact. He left the field accompanied by two security members.

Rugby website sarugbymag.co.za has a segment called Rate The Ref. It seems sections of the South African rugby public were more than happy with Mr AmashukelI’s performance, with 29.37% voting his officiating standard as good. Some 12.86% even rated it as excellent.

Of course, opinions are always subjective, but in truth, AmashukelI’s performance was way below what is required at international level.

BREAKING: South Africa make 14 changes to their starting XV for the second Test against Wales.

Etzebeth the only man who keeps his place.

Handre Pollard captains the side. @WalesRugby

Many Wales supporters wouldn’t have dared to dream that Wayne Pivac’s men would be able to come within touching distance of a first victory over the Boks on South African soil last Saturday, and yet it seems these same supporters are quick to blame Biggar for the defeat.

“Until we drop Biggar, we will have no chance of beating the Boks again in my lifetime,” wrote one disgruntled Welsh fan on social media following the narrow defeat.

That is a pretty pessimistic statement when you consider Wales were winning until the final minutes of play, and they have two more matches to play in the series.

“Biggar’s performance was shocking. He can’t get our backline moving at all. I would retire in shame if I was him,” added our cheerful friend.

In reality, the Northampton fly-half had an excellent first half and ended the match with 14-points, while he often set the tone by refusing to be intimidated by the current world champions.

They say you don’t fully appreciate what you have until it’s gone. That is certainly the case for Wales fans regarding Dan Biggar with his wholehearted commitment and willingness never to take a backward step,” said the Wales captain.

Dan Biggar doesn't know what the issue is.

DB: “I don’t know what the referee expected us to do, just come here, lie down and give South Africa everything their own way?"

“I don’t know what the referee expected us to do, just come here, lie down and let South Africa have everything their own way? From our point of view, we wanted to try and get in their faces and not take a backwards step. That’s part of the game.

“You need some aggression and competitiveness and get into it. I didn’t see any issue. They were just as niggly, competitive and as abrasive as we were. It’s a Test match, and we’re away from home against the world champions. I’m not quite sure what people expected from us. Just roll the carpet out and applaud them off the pitch?” added Biggar.

With the second and third Tests to come without wanting to tempt fate, plenty of players have been more than willing to roll the carpet out for the Springboks in past encounters.

Some players looked like they had been rolled up in the carpet and chucked on the nearest landfill site.

Such is the strength in depth of South African rugby that coach Jacques Nienaber has been able to make 14 changes for Saturday’s second Test in Bloemfontein.

In many ways this second version of the Boks is more dangerous.

Despite the presence of Etzebeth and Pollard, the South African media are keen to label the selection a “B Team.” They, like many others, were shocked by the challenge Wales presented in Pretoria, but it seems it was always Nienaber’s plan to give every one of his 42-squad a crack.

“We want to tick a fair few boxes in this series,” said  Nienaber.

Whichever way you choose to label the latest Springbox selection, the Wales squad and management must see it as a chance to go a step further and gain victory to level the series.

One thing is for certain Wales captain Biggar won’t be taking a backward step anytime soon – and for that, Welsh fans should always be thankful.