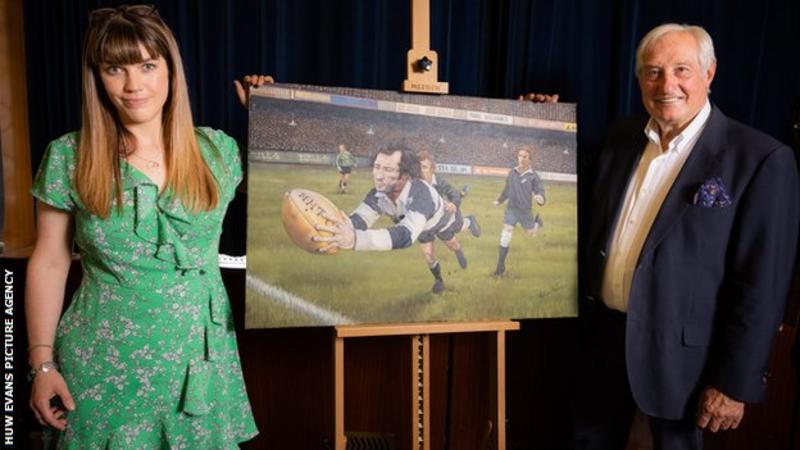 Sir Gareth Edwards has received a lasting image of what is widely acclaimed as rugby union’s greatest try.

Edwards’ touchdown for the Barbarians against New Zealand at Cardiff Arms Park in January 1973 has long entered sporting folklore.

But, amazingly, there are no recorded photographs, with only television footage available to showcase a breath-taking length-of-the-field move started by Phil Bennett, who died last month, and finished by Edwards.

To mark Edwards’ 75th birthday next week, a painting by Welsh artist Elin Sian Blake was commissioned that captures him diving for the line.

‘The Greatest Try’ project will include prints of it being sold for charity, with a celebration lunch planned at Celtic Manor Resort next January on the game’s 50th anniversary.

“This was Phil’s moment. There was that momentous sidestep and Cliff Morgan’s commentary,” Edwards recalled.

“I would like to give some credit to Phil, as sad as it is that he’s not here in person. Without that start we wouldn’t be here.

👏 Special morning at a special venue to celebrate a special player. The legend that is Sir Gareth Edwards marking 50 years since *THAT* try for @Barbarian_FC.

Amazing to see the match-worn jersey from that day in 1973 and a specially commissioned painting by @ElinSianBlake pic.twitter.com/rZ12Gz6BLW

“It’s given me the greatest pleasure to talk about the try all around the world. What I loved about the try was the improvisation and the decision-making not only on the ball, but off it. You don’t see much of that these days.

“There were lots of fabulous players involved in that game. There was some stupendous, wonderful improvised play.”

By the time of the 50th anniversary, Wales will have long completed their current tour of South Africa, in which they are currently 1-0 down with two Tests remaining.

Sir Gareth believes Wales have been disrespected by the world champions over the Springboks’ second Test team selection.

Springboks head coach Jacques Nienaber has made 14 changes from the line-up that edged past Wales 32-29 in a thrilling series opener decided by Damian Willemse’s penalty with the game’s final kick.

He has named two uncapped players in the starting XV – wing Kurt-Lee Arendse and number eight Evan Roos – and four more among the replacements.

Only lock Eben Etzebeth remains from Pretoria, with Nienaber stating that he “needed to strike a balance between giving our talented young players an opportunity to show what they can do at international level, and winning”.

Nienaber’s line-up contains a total of 393 caps, but 321 of those Test appearances are shared by just five players in Etzebeth, fly-half Handre Pollard, centre Jesse Kriel, prop Trevor Nyakane and flanker Pieter-Steph du Toit.Such an approach has cut little ice with Wales great Edwards, who also feels the clash in Bloemfontein on Saturday has been partly devalued.

“The big disappointment for me was to learn South Africa are going to change virtually their whole team,” Edwards said.

“They have got every right to prepare for the World Cup, but I would really like to know what their logic is in changing so many.

A real privilege to be at the unveiling of the painting of ‘that try’ by Sir Gareth Edwards, by the incredible @ElinSianBlake here at @Cardiff_Rugby pic.twitter.com/V82eXLpMCU

“I suppose the only way they can justify it is if they win. I think it shows a little bit of disrespect.

“If there had been five or six changes, you would maybe have raised an eyebrow. But 14 changes, it’s overwhelming.

“I don’t think it shows respect for Wales and, looking logically, there is only one way (for Wales) to view it and that’s to give them a good ‘tonking’, as they say.

“It is a great opportunity to beat them and say, ‘Thank you very much for picking that team’.

“I am not going to suggest for one minute that I know all that is right and wrong about the modern game, except that it is a pretty physically-demanding set-up, and it is important that do you (make changes), but there are ways and means of changing. I think it has stunned a lot of people.

“I think they (the Wales players) are probably talking to each other and saying, ‘Right boys, that’s what they think of us’. I think it is great motivation for Wales.

“I think it (South Africa’s team selection) does, to an extent (devalue the game). There is a lot at stake, but I think it takes a bit of an edge out of it. That is not Wales’ fault.”

Wales have never defeated the Springboks in South Africa, but, after going desperately close at Loftus Versfeld last weekend, they will line up in Bloemfontein with a serious chance of making history.

Unlike Nienaber, Wales boss Wayne Pivac is not expected to make wholesale alterations, although it is thought that wing Alex Cuthbert and hooker Dewi Lake are pushing hard for starts.

Edwards added: “Take it from me, any side I’ve played against in a green and gold jersey, you are going to have to give respect to.

“It is not going to be easy, far from it, second team or not. My warning is don’t treat it lightly – treat it like it is the same team.”