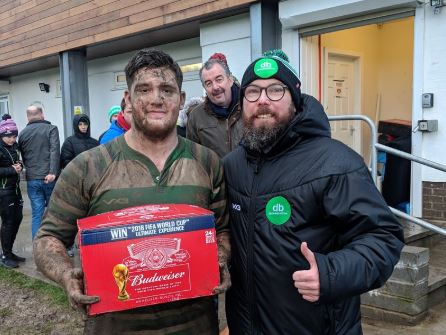 Man of the match Whitland No.8 Scott Buirds with the Deadballline.

The Deadballline Guy loves a bit of mud-wrestling, so he put on his spandex costume and headed for Llanelli Wanderers to see them play Whitland in a proper six-pointer mud fest.

Before the game, he spoke to Richard Keenan – Mr. Wanderers – the club secretary and chairman of WRU district G.

But what the other mob? Here’s Deaders with Whitland club president Gilbert Williams along with his good mate Hayden, a lifelong clubman who’s been following Whitland for 70 years. Yep, since the 1950s.

In a hard-fought game, the Whitland boys earned a narrow 9-7 win to stay mid-table in National League Division One West.

2 happy @whitlandrfc players following a tough 80mins! What i like was the honesty that they would have lost the game a couple of wks ago! The Green Machine are 2 in a row & developing @bennybennett8 ! @FraserMercsport @pembssport1 @AllWalesSport @mikephillips009 @cubbyboi pic.twitter.com/lJtYh9msfZ

Post match I managed to get the reaction of the @whitlandrfc coaches @bennybennett8 & Dan Mason! Gar & i have worked together for a number of yrs so it was good to know let colleagues know he’ll have an extra spring in his step Monday! 😊 @AllWalesSport @FraserMercsport pic.twitter.com/yNrPRcSIvC