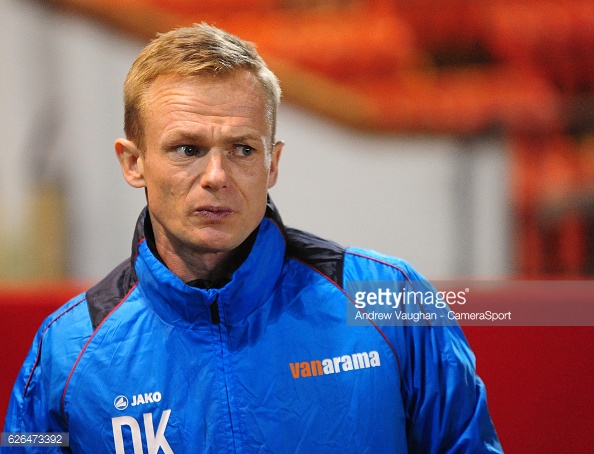 Manager Dean Keates is working tirelessly on moulding Wrexham’s back four into a solid, reliable defensive unit as they plan to build a promotion challenge this season.

The Dragons fielded a new-look defensive unit during their 2-1 win at the Racecourse and goalscoring right-back Reece Hall-Johnson revealed Keates has been taking an in-depth interest in ensuring the goals against tally stays low.

“The gaffer (Keates) has done a lot of work with us on how we want to play defensively,” says Hall-Johnson. “We could not keep a clean sheet, but I put my hand up for giving away the free-kick which led to Wood’s goal.”

Keates fielded a new-look back four with, in the absence of club captain Shaun Pearson, Hall-Johnson, man of the match Fiacre Kelleher, Jamie Reckord and Elliott Durrell forming the barrier in front of goalkeeper Rob Lainton.

The Dragons, who travel to play Solihull Moors in their second League fixture of the season on Tuesday, laboured through the first half against Wood, looking nervous and edgy.

Keates intervened at half-time, issuing a ‘believe in yourselves’ message to his players

“In the first half we didn’t show enough composure on the ball, [players] didn’t move it as well as they can do,” said Keates.

“I told them ‘back yourselves, you’re good players’.

“On the back of that they went out and, while the conditions played their part, I can’t question the players’ application and the effort that they gave.

“Glad to hit the road running. It gives us a building block and a bit of momentum going forward into the next game on Tuesday.”

Home manager Dean Keates gave eight players their Wrexham debut and one of them, right-back Hall-Johnson, scored their first goal after 27 minutes when his beautifully timed run down the right was spotted by fellow debutant Kelleher, who slid a pass into the full-back’s stride.

“I set off on a run from inside our half and the pass to me was spot on,” said Hall-Johnson. “Wood backed off, I shot from the edge of the box and thankfully it went in.

“This is the start wanted. When we looked at the fixtures our aim was to win first few fixtures. This sets us up for for Tuesday’s trip to Solihull Moors.”

Keiran Murtagh equalised for Wood from a glancing header just after the hour before midfield player Luke Young, who scored Wrexham’s 70th winner from a beautifully struck free-kick.

“Wood did put us under pressure. They have way of playing which is effective, but we rode out of the storm and came through.

“It’s good to score and as it was the winner that makes it even sweeter, but the team effort was the important factor, said Young.

Wrexham were playing a league fixture for the first time in more than 200 days – seven months after the last Vanarama National League match at the Racecourse.

This is the latest Wrexham have ever started a league season – and the third time they have won their last three opening fixtures.

Now they face back-to-back away matches, against Solihull on Tuesday and Yeovil next weekend, in their bid to build on a winning start.