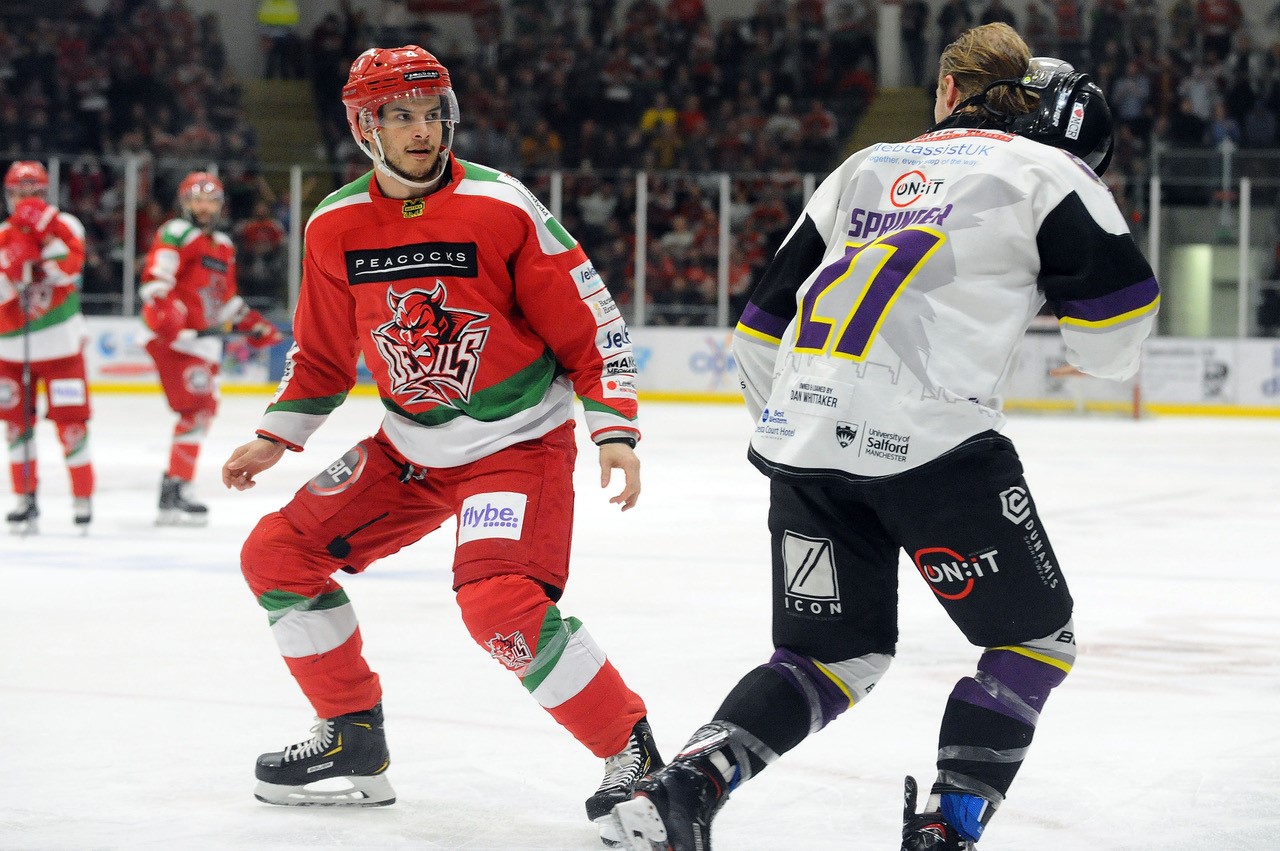 Popular Cardiff Devils defenceman Mark Louis will return for the 2021/22 season, the team have confirmed.

The forthcoming season will be Louis’ fifth in the Welsh capital after originally joining from ECHL outfit Orlando Solar Bears in 2016.

The 33-year-old has made 178 appearances in the EIHL for the Devils, establishing himself as a no-nonsense defenceman who is willing to drop the gloves.

Devils head coach Jarrod Skalde said bringing Louis back was an easy decision: “I am very pleased to have Mark back. With so many new faces coming in, it is important to have a solid core of players that know the culture of this organisation and have been part of the success.

“Signing back Mark Louis was a no-brainer. He is a big, strong defenceman that moves the puck well. He is a great skater, which is not always a compliment you can give to a 6’4” defenceman, but Mark moves so well.

“He is also the toughest player in the league and his teammates know he’s got their back. Everyone plays a little bigger when you have a guy like Mark Louis on your team.”

Louis spent last season with HK Dukla Michalovce in Slovakia where he played 42 games and helped his team to a second-place finish in the regular season. He then played an additional nine games in the Slovakian play-offs, before his side eventually lost at the semi-final stage.

Louis spent 4 years with the Portland Pirates in the AHL and 1 year in the ECHL with the Orlando Solar Bears before joining the Devils ahead of the 2016-17 season. He played 174 AHL games for the Pirates, who were the top affiliate of the Washington Capitals of the NHL.

Prior to turning pro, Louis played four years at St. Francis Xavier University. He also earned his MBA (Masters in Business) from Cardiff Metropolitan University during his time with the Devils.

LOUIS A KEY RE-SIGNING IN SUMMER OF CHANGE
Cardiff Devils fans are anticipating a number of changes as the Cardiff Devils rebuild post-Covid under Jarrod Skalde this summer, but the returning familiar face of Mark Louis will be a welcome re-signing.

Coming off a successful season in Slovakia (GP 48, 1 G, 5 A, 6 Pts, 83 PIM, +8), Louis will have featured close to the top of most fan’s lists of players to re-sign for the new season and is a proven top-four defenceman in the Elite League. In addition to his solid defensive qualities, his willingness to drop the gloves and defend his teammates can have a galvanising effect on the team when momentum appears to be sliding or when opponents have tried to bully their way into the game.

His experience from winning titles with the Devils previously will prove vital to a new-look locker-room and it already seems that Skalde acknowledges him as a key piece moving forward.