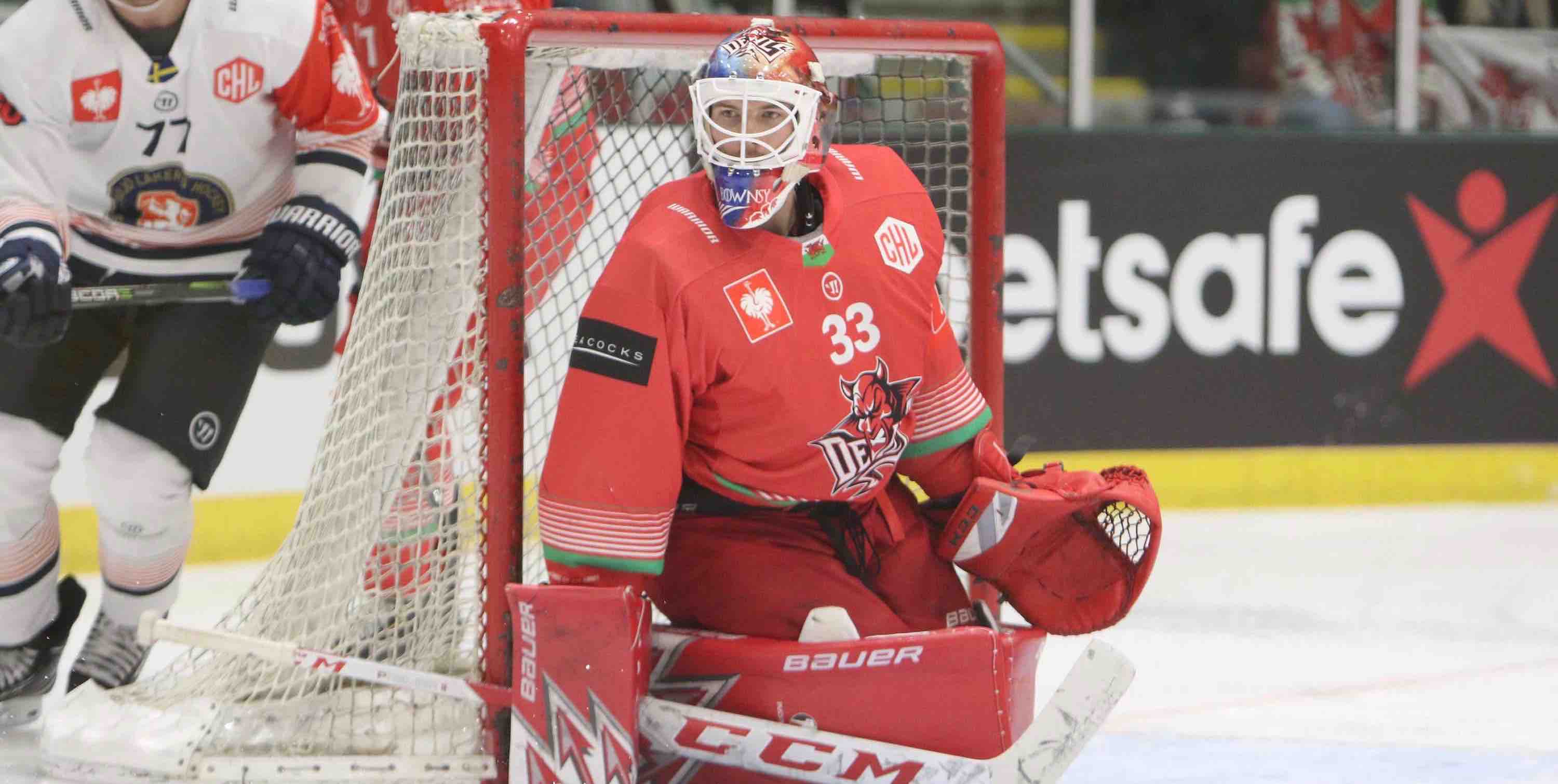 Cardiff Devils supporters are the talk of Swedish ice hockey after their night out in Gothenburg.

Security staff at the Scandinavium praised the Red Army faithful after Devils’ 9-2 Champions Hockey League defeat against Frolunda’s Indians, saying ’they are the best’.

Around 150 Cardiff fans were at the match, cheering, singing, chanting and backing their team throughout the 60 minutes.

A banner proclaims Devils are ‘On the Wings of an Army’ and that’s the way it felt on an historic night for ice hockey in Wales.

Head coach Andrew Lord’s team were beaten by the reigning European champions, who were ruthless on powerplays with captain Joel Lundqvist scoring a hat-trick when Devils were shorthanded.

Cardiff owner Steve King and managing director Todd Kelman both tweeted their thanks to the club’s travelling supporters.

“So proud of our fan base,” said Kelman. “Tough game against a great team and you guys were incredible once again. Thanks to all who made the trip to Sweden.”

Cardiff are now third in group H with one fixture to play, but a regulation time win against Frolunda Indians at the Viola Arena next Tuesday would sent Devils into the last 16 knockout stages and probably send the three-times Champions Hockey League winners out of the competition.

“An unbelievable experience for our players,” said Lord. “It shows how far we have come over the last three years, playing the best team in Europe.

“I am learning so much from these matches as a coach. We defended hard in the first period when our stick detail and defensive zone structure were solid, had some good minutes, o-zone time and looks in the second.

“There were some bad habits creeping in during the third and we hit major penalty trouble. I am not overly thrilled with how we closed the game out and we hung Bownsy (Ben Bowns) out to dry a little bit out there.

“Frolunda’s skating ability took over and put us in trouble. They have a lethal powerplay.”

So proud of our fan base tonight! Tough game against a great team and you guys were incredible once again. Thanks to all who made the trip to Sweden! https://t.co/ScC4ysMSuG

Lord is hoping his team will have Blair Riley and Mike McNamee, both ruled out by injuries last night, back for the CHL return fixture at the Viola Arena next Tuesday, but he said: “We’re hopeful of having a couple of bodies back because we are decimated by injuries right now.

“There are a couple of Elite League fixtures to play before then and we will be focused on those now.”

Frolunda coach Roger Rönnberg admitted: “It didn’t feel like a 9-2 game and I am not satisfied with how we played 5v5. We killed off the game on powerplays and were effective there, but we need to play better in Cardiff if we want to win.

“That is going to be a big challenge. We have to be humble and understand Cardiff Devils are a winning team at home and play hard. We have to up our standards to beat them.”

Lundqvist’s hat-trick were all on the PP with Ryan Lasch assisting on all of them and the Indians C said: “Ryan and I always know where we have each other.

“In the Swedish League teams play with a tighter box and it is not that easy to get those chances. This time we succeeded.”

His treble against Devils took his personal tally to 200 all-time for the team.

“All these games are tough and it won’t be the same next week in Cardiff,” said Lundqvist. “We’re better now than we were in August, but we are still humble.”

In the other group H fixture Mountfield HK won 2-1 against Graz99ers. Radek Smoleňák faired Czech team Mountfield in front, while Graz thought they had levelled through Clemens Krainz only for a review led to the effort being disallowed.

With less than 60 seconds remaining in the first, Mountfield doubled their advantage through Rudolf Červený to make it 2-0.

Graz netted when Travis Oleksuk backhanded a rebound into the net with 16 seconds left, but it came too late for the Austrians to snatch a reward from the game.

Devils’ Elite League rivals Belfast Giants are out of CHL hockey after losing 6-3 against Sweden’s Lulea Hockey at the SSE Arena.