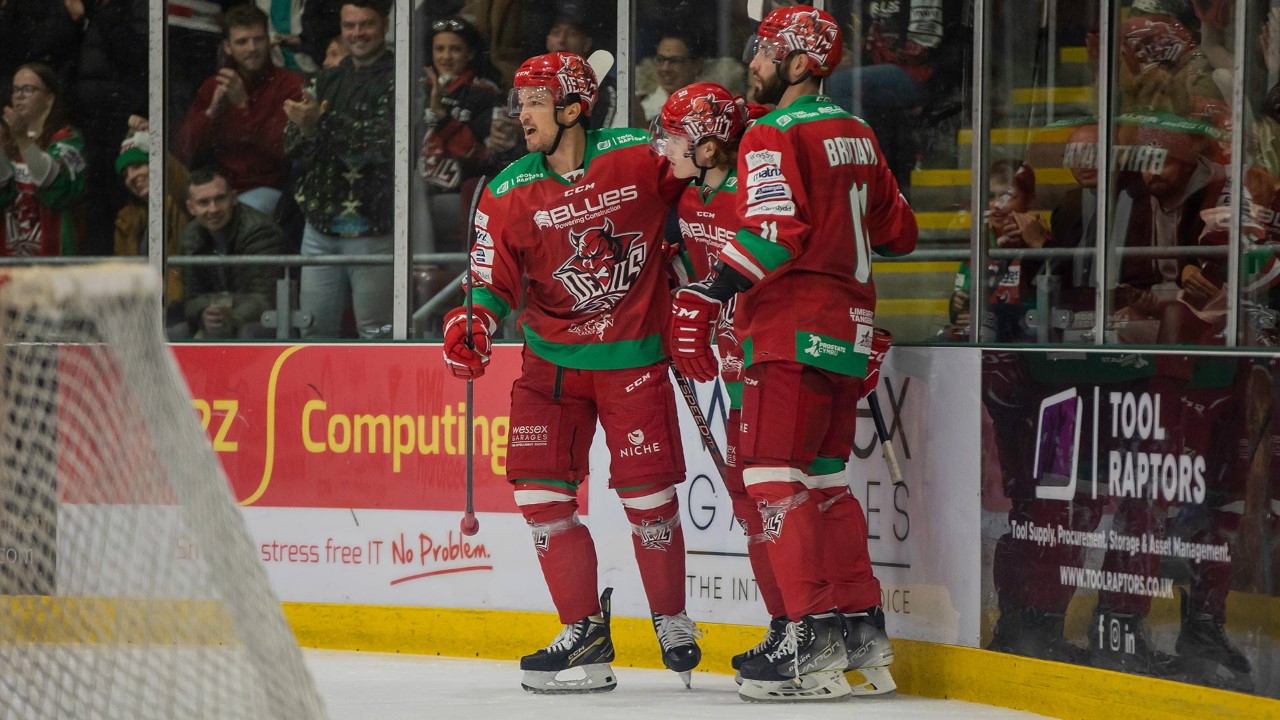 Cardiff Devils head coach Brodie Dupont insists his team have put last weekend’s disappointment behind them, as they return to action for the first time following their capitulation against the Belfast Giants.

The Devils (9-4-1) head to Scotland for their first game of the season against the lowly Dundee Stars (3-10-2) tomorrow night, before returning to Ice Arena Wales on Sunday evening for the visit of Manchester Storm (4-6-1).

The team are coming off a testing week following a heavy defeat in Belfast, one of the worst results in the club’s recent history.

After trailing the first period 2-1, the Devils suffered a humiliating collapse in the middle period as the Giants hit seven without reply, with the home side eventually running out 9-3 winners in a crushing defeat for Dupont’s team.

That defeat brought an ignominious end to a punishing run of nine games in 16 nights. The easing of the fixture list has allowed for a full week to prepare for this weekend.

Head Coach Brodie Dupont on a challenging schedule, learning from the last game, and looking ahead to the weekend ⤵️ pic.twitter.com/epeY8HDtcT

Dupont told Devils TV that the opportunity to train for a full week without interruption could not have come at a better time as his side look to make amends.

“With every loss comes some learning curves. We’ve had a chance to review the tape – as painful as that was – and we took what we could out of it.

“We reviewed it early this week so we could work through that video and that trash, we took the clips that we felt were important.

“Any time you’re congested with games, energy becomes a priority in terms of how much to rest versus how much to train, so we shortened our training sessions a little bit.

“When you have a week like this, you can hit the reset – you can work on multiple things, you have four days of training. You can pick a day and focus on some areas of the game.

“As a coach, we definitely had some areas we needed to work on. It’s progressed nicely throughout the week, so we’re really satisfied with that and want that to now translate over to the weekend.

“We’ve got to feel better about ourselves, it’s been a rough week – no doubt about it and a sour taste, but none of this matters if we don’t perform in the games.”

STARS YET TO SHINE
Dundee have so far struggled this season and currently find themselves outside of the play-off picture in ninth-place and on a run of seven-straight defeats.

This week the Stars made roster changes to break out of their current funk with Devon Daniels and Francis Marotte both released, whilst Fabrizio Ricci has switched to the Nottingham Panthers.

“We haven’t seen them yet this year, so it’ll be an interesting match-up,” said Dupont. “Based on the pre-scouts, we feel we match-up well and we’re really excited to get up there.

“Those are never easy games, you’ve got a long travel day and Dundee’s been a hard rink for us to go into – they always gave us a hard time last year and I expect the same this year.

Despite their current struggles, Dundee reached the play-off semi-finals last year and Dupont believes they remain a threat and are better than what their current league standing suggests.

“They had a great finish last year, making it all the way to the play-off championship, so they’re looking to build on that. I don’t believe where they are in the standings reflects where the team is and who they are, so I expect a top Dundee team.

“Anytime a team makes changes, they become dangerous. They’ll be full of energy and it’s up to us to basically play our game, which is sustained tempo, sustained pace and try to take it to them just to take them out of the game as fast as we could.”

VERDICT
The Devil’s approach to managing the fall-out from last weekend disappointment has appeared to be to let the team do their talking on the ice.

The organisation has hunkered down this week. There have been no bold statements, no snap decisions, nothing to add to the drama. Publicly at least, they have removed the emotion from the situation and have taken a deliberate, measured response.

One swallow doesn’t make a summer and a single defeat in the regular season won’t shape the entire season, but that said, the manner in which the Devils crumbled against Belfast surely points to fundamental problems within the team.

With the dust still settling, only time will tell if those flaws have been properly addressed and ironed out, but two markedly improved performances this weekend would certainly help move the season forward.

Tickets for all forthcoming Devils games are available via their official site.