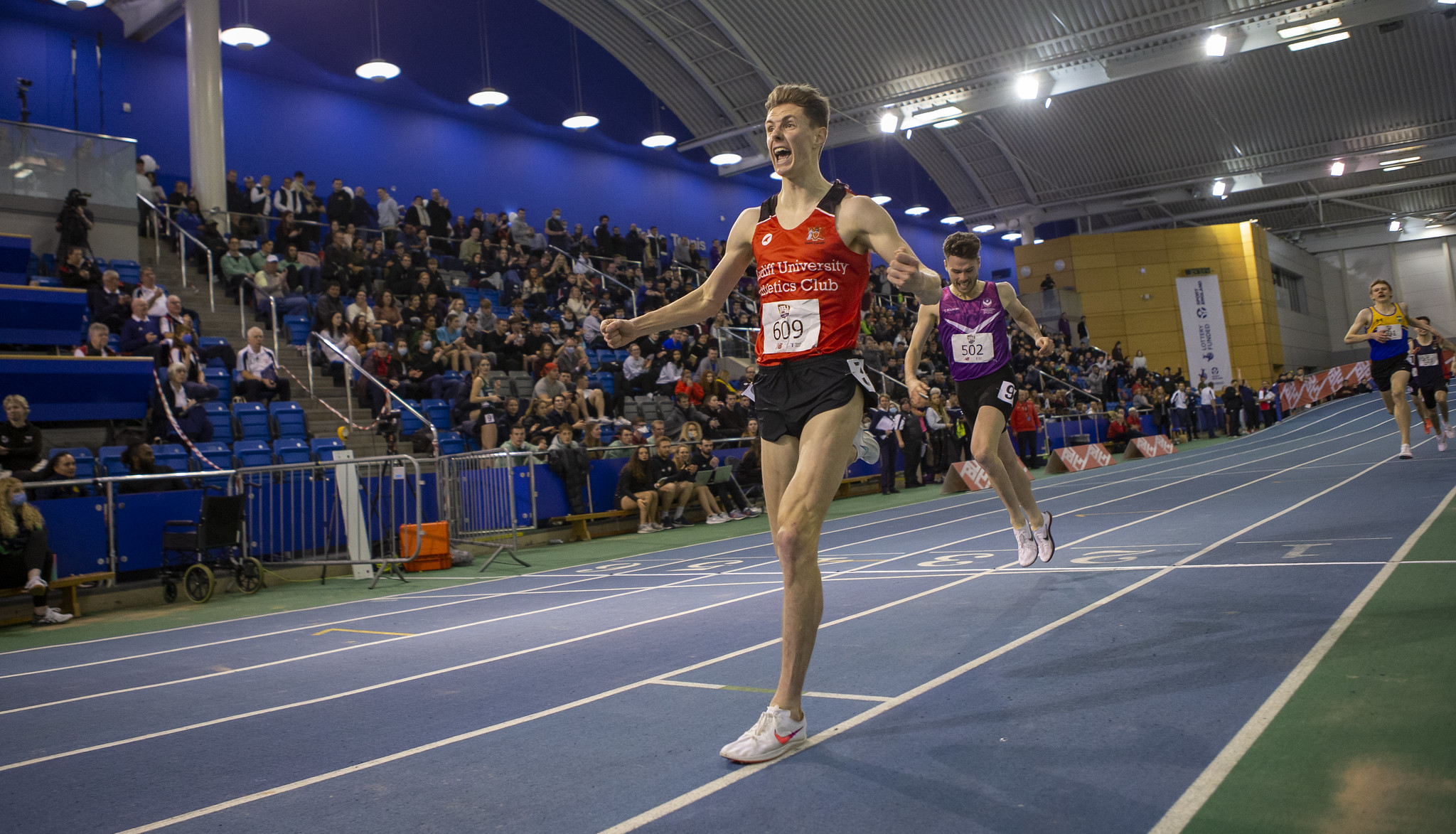 By James Meiklejohn and James Heneghan

It’s been a big year for Cardiff University Athletics Club (CUAC) and that looks set to continue.

The student-led University club has grown rapidly since the pandemic, with over 150 members – ranging from beginners to British Universities and Colleges Sport (BUCS) champions and international athletes.

Club president, James Meiklejohn, sees a lot of the growth from linking together the athletics community in Cardiff and formalising long standing set-ups.

“Cardiff has always had a strong tradition of athletics, with high-profile coaches and training groups, and one of five indoor tracks in the UK,” says Meiklejohn.

“We’ve been trying to make this more accessible to the thousands of students who arrive in Cardiff each year, to drive both the inclusive and performance side of the club.

“People come to the club for many reasons, and university athletics gives people a platform to train hard and break through in the senior age group, as well as a social scene that gives lifelong friendships.”

“This is a very exciting time to be involved with Cardiff University Athletics Club,” says Mitchell.

“The highly organised, ambitious and caring committee is leading a quick and sustainable growth in the club. This means it provides opportunities for athletes of all levels, from beginners through to international athletes.

“This, combined with access to fantastic facilities – including one of the few indoor tracks in the UK – and a developing link with Welsh Athletics – as they look to establish Cardiff as an athletics performance hub – makes it a great place to progress and develop as an athlete.

“It has been a great pleasure coaching endurance athletes at Cardiff Uni and I am excited to continue to coach at the club moving forward.”

Thie, a one-time fourth placed finisher at the World Indoor Athletic Championships, has been part of this Cardiff community for years and looks forward to seeing further growth.

“I first started coaching here in 2008 with a general nature that anyone could join the group,” he says.

“It began mainly as Cardiff Met students but soon became much wider. Chris Discomb went back to do a masters at Cardiff University and ended up winning the BUCS steeplechase championship in 2011. He is probably the official beginning of having Cardiff University athletes within the group.

“From here we had high profile athletes join, such as Jake Heyward (Oregon track club athlete and European 1500m silver medallist in 2022) who progressed rapidly to a 3:36 1,500m man.

“It has always been exciting to have a programme with an open door policy.

“Another example of the link is the Howorth brothers who wanted different courses, but wanted to train together. They were surprised that this was possible even at different universities.

A week late but what a start to the XC season for the club at @CrossCardiff 1st uni and U23 teams for both the men and women.
Huge numbers of current and alumni competing plus club support around the course❤️ Start how we mean to go on 👀🔥#upthecuac #runningfamily pic.twitter.com/MEfRnp3Ilb

“To see athletes such as those and James Heneghan (BUCS indoor 1500m champion) over his long time at Cardiff thrive is exciting to see. But it has also helped the group have well-rounded athletes given the range of walks of lives and courses.”

Thie says he started his coaching journey with student athletes.

“I really don’t know much difference. The rapid progression that student athletes can have with a clear structure, group and facilities can be exciting.

“The downside is that some students can party a little too hard in early – and occasionally later – years which you don’t see as much with more senior athletes.

“But there is something fun with seeing university athletes and their end performances throughout undergrad, post-grad and trips to the USA. You never know where it can end up.”

When asked how he sees the set up changing in the next few years, Thie adds: “Cardiff University have got themselves in an extremely strong situation with their committee and organisation.

“Previously, I reached out to Cardiff University for a little bit of support for the group and the attitude was that the set-up was already in place and they didn’t need any expansion or support.

“Now, the group set-up recognises the importance of some support and thanks.

“Getting the message out that you can come to Cardiff and train with a group at either major university is key.

“We are definitely getting more professional as shown by the improvements athletes have made.

“We always showcase Jake Smith as a 15:30 5K guy, who became a 60:31 half marathon runner and Charlotte Arter’s success while training with Team Thie. Big jumps are possible here.”

One of Thie’s athletes, Heneghan, won the club’s first BUCS gold medal in five years, in the 1500m.

Heneghan has been a regular feature in the club and plans to keep this going for his sixth (and final) year of University.

He says: “It meant a huge amount to win a BUCS gold medal for Cardiff, since I fell just short with silver in 2020 and there hadn’t been one since I started at Cardiff University.

“The atmosphere at BUCS indoors is always fantastic, especially around the final bend, given Cardiff University and Cardiff Metropolitan University’s friendship.

“Balancing sport and university has been a constant learning process. At times it can be extremely busy, but most of the time athletics is a great sport for taking your mind off any day-to-day stress.

“Running has always been very popular in Cardiff and the city has become even more of a running city since the pandemic. It has been great to see the developments in our set-up with Welsh Athletics and Cardiff Met in the past few years and I am sure that this will continue to grow over the next few years.”

Another athlete the club are extremely proud of is Dom Coy, a name to keep an eye on.

In his first year in the senior age group he came 18th at the Commonwealth Games in the individual event, and then was part of a spectacular silver medal-winning Welsh triathlon relay team.

“Living, training and studying in Cardiff has had a big impact on my progression,” says Coy.

Iestyn Harrett and Dominic Coy look ahead to Sunday and what they’ve learned from today’s race.@iestyn_harrett finished 9th and @DomCoy02 18th in men’s individual triathlon 🏃#B2022 #CWG2022 pic.twitter.com/isnNdykZFe

“The city, people and environment have allowed me to balance my undergraduate degree in engineering and the 20-plus hours of training a week needed for international competition.

“I mostly train with the National Triathlon Performance Centre for Wales. A morning swim followed by a run, lectures in the day, cycling in the evening and then more university work is a tough schedule but it works.

“I love spending time with CUAC. Often it is just the odd run, a university race or the occasional social, but the club is happy to let athletes link in when they can.

“The break from routine is nice and the club is super friendly.

“Unfortunately, the pandemic has meant that so far I haven’t had many opportunities to wear the red dragon vest, but hopefully that will change at BUCS cross country this year.

“The main aim is to become a full time athlete after my degree and as part of this journey, hopefully, the U23 European and World Championships will take centre stage.”

The socials that Coy speaks of are a key part of university life, but the club has a keen eye on ensuring that social events are appropriate for the entire club.

In 2021/22, Ellie Kiff was the social secretary and in charge of the events taking place around training.

“I really enjoyed being the CUAC social secretary for the 2021/22 academic year, even though balancing your social life with training can sometimes be difficult,” she says.

“Weekly socials were organised to allow all training groups to get together, which consisted of chilled pub nights, Student Union Wednesday’s, as well as many sober socials including bowling, coffee and laser tag.

“It is very important to communicate with the whole society to see what type of socials are most popular, with upcoming races and deadlines to be taken into account.

“A decision made by the whole committee after the success of our Christmas ball saw each term having a dedicated ball.

“We all believed they were essential in the recognition of individual success, with recognition being given to athletes for their commitment, improvement, and success, with even a few fun categories added in.”

Kiff was also responsible for putting together a tour that epitomised the fun side of athletics.

“During our Easter break, CUAC took a team of 20 athletes over to Dublin for a head-to-head against Dublin City University (DCU), which was organised with the head of athletics at DCU, Paul Byrne.

“Paul was a great help in organising the venue, providing sponsorship for the event, and through weekly Zoom meetings we were able to form this idea into a reality.

“A narrow loss of 67 (DCU) – 65 (CUAC) was the final score of the meet, and DCU plan on visiting Cardiff at some point during this academic year for another meet.

“It is great to have a strong connection with DCU, which will hopefully be carried on in years to come.”

“The importance of having fun while training to compete, whilst being the best possible version of yourself, is an important factor in enjoying the training process, and I am glad I have been able to incorporate this into the lives of our CUAC athletes for the 21/22 academic year.

“The sense of community within CUAC is a special one, which is down to friendships being formed within the society, and people not just being seen as training partners.”

Drawing on the knowledge, enthusiasm and experience of a wide range of people, the club looks well set to grow further into the future, as part of a thriving athletics scene in Cardiff.