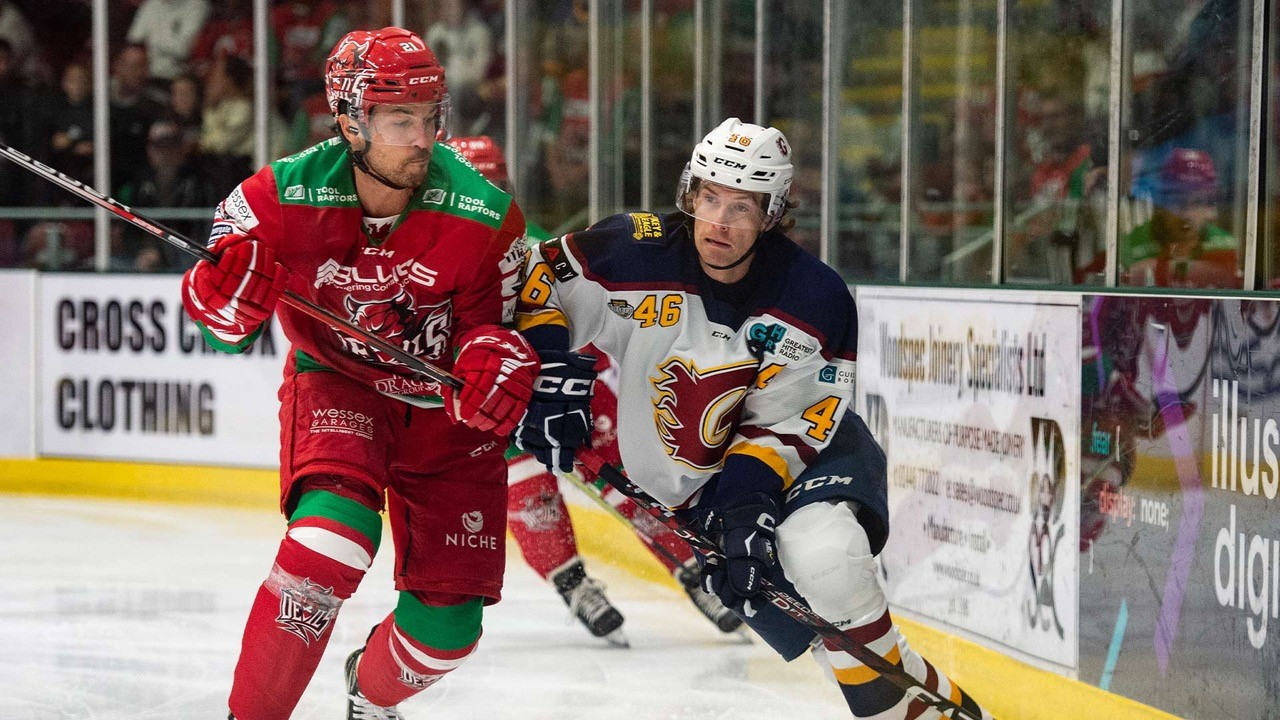 Cardiff Devils must quickly recover from their first defeat of the season ahead of this afternoon’s Challenge Cup game against in-form Coventry Blaze (5.30).

The Devils were outsmarted by the Guildford Flames on Saturday night with Jake Coughler getting the solitary goal in a 3-1 loss.

Flames were backstopped by an impressive performance from goaltender Taz Burman and frustrated the Devils attempts to get back into the game after taking a two-goal first period lead.

“I thought we had a good first few shifts. They [Guildford] were sly on transition, we gave them a couple of turnovers, then essentially, they took over the first period,” said Brodie Dupont.

Guildford arrived in Cardiff Bay seeking their first win of the season and faced Taran Kozun in net for the Devils.

However, it was debutant Burman who won the battle of the goaltenders, producing a 30-save man-of-the-match performance for the Flames.

Kozun had an obstructed view that left him helpless to prevent Daniel Tedesco from opening the scoring for Flames.

In the final minute of the opening frame, Robert Lachowicz tipped-in former Devil Ben O’Conner’s shot, from which the Devils never recovered.

“The first period was what killed us – it put us behind the eight-ball. You start chasing the game, it’s obviously harder to play that way and it’s easier to play with the lead,” admitted Dupont.

“I thought we had a good first few shifts. They were sly on transition, we gave them a couple of turnovers, then essentially, they took over the first period.

“We challenged the guys in between the first and second [periods] and they responded well. I would’ve liked a few more quality shots instead of passing up in the slot at times, but we had some good o-zone time in the second and third.”

The Devils were unable to find a way back in a scoreless second period, despite outshooting Guildford 14-6 and allowing a further two power play opportunities to go unpunished, on a night in which they went 0-for-4 with the man advantage.

“The penalty kill did a pretty good job but when you don’t cash in on four-chances it will probably hurt you in the end – but the big picture is I’m happy with the guys in how far they’ve come since day one in training camp,” said Dupont.

“This is the real deal, we have to find a way just to win when we’re not having our A-game but it’s a learning curve and we’ll keep trucking ahead.”

The Devils finally got on the scoreboard when Jake Coughler sniped on a drop pass from Blake Thompson to eventually beat Burman at 41:24 to pull within one.

The Devils piled on the pressure and even after pulling Kozun for the extra attacker with just over three minutes remaining, they still could not find another way past Burman.

A bounce back win is far from guaranteed against Blaze, who maintained their 100 percent record with a 6-1 away victory at Nottingham Panthers last night.

Marly Quince scored twice and Jack Billings scored and had two assists for the Blaze, as Finnish goalie Paavo Hölsä recorded a third-straight win in as many appearances.