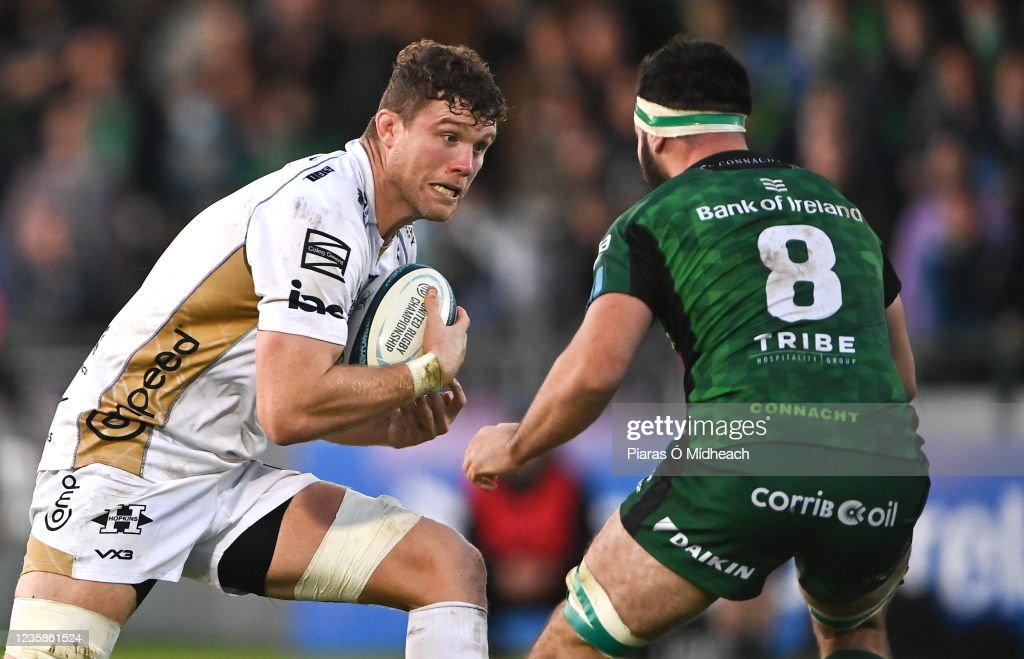 The Dragons' Will Rowlands in action against Paul Boyle of Connacht. Pic: Getty Images.

Will Rowlands has insisted the four Welsh teams have to improve in the United Rugby Championship – or else the “depressing” outcomes of recent seasons will undermine the national team.

On the eve of a new campaign for the regions, the Wales and Dragons second row believes there is a collective responsibility to make a real impact.

Last season, none of the four Welsh sides managed to reach the URC knockout stages and the highest ranked among them – the Ospreys – were presented with the Welsh Shield for finishing ninth.

Rowlands’ Dragons begin their own campaign with a Saturday night run-out at Edinburgh, a match which is live on S4C.

The 30-year-old former Wasps forward – who has become one of the first names on Wayne Pivac’s Wales team sheet – admits: “Across the regions last season, everyone was very disappointed that the best of the Welsh teams finished ninth.

“If you consider yourself a strong rugby nation – one that has an international team that can compete with the best in the world — then you need to have club sides which are competing with the best club teams in the world.

“There needs to be some progress forward on that front.

| Big day for Angus O’Brien who turns 28 today as he prepares to face Edinburgh later – have a good day Gus and go well tonight!

We’ll have a special Dragons TV interview with Gus at 1pm ahead of his ‘second’ debut later for #WeAreGwentRugby pic.twitter.com/RDyEzH5ZvD

“The knockout games are crucial. I’ve been fortunate to play in some knockout European games over the years and they are always great occasions. I’d like to see those in Welsh rugby again.

“It’s been a bit depressing in the last couple of years.”

The Dragons will travel to the Scottish capital with optimism after a summer spent strengthening their set-up, both on the field and in their coaching department.

Dai Flanagan has also come in as head coach, having moved from the Scarlets to assist Dragons director of rugby, Dean Ryan.

“I have been really impressed with Dai Flanagan so far,” says Rowlands, who had five weeks off after returning from international duty in South Africa.

“He is a master of keeping everyone in the group on the same page, which is really important for us.

to face @dragonsrugby at The DAM tomorrow night!

Brought to you by @Galbraith_Group

“I think he will be instrumental in developing the less experienced guys in the squad, who will end up playing a lot for the Dragons.

“I was involved in the Wales campaign when Argentina came over last year and he was doing some coaching with us then. But I had already heard a lot about him from the guys who were involved at the Scarlets.

“Dean is still pretty hands on. It would be tough to wrestle that away from him. Between the two of them, they are going to share the load.”

Only Zebre finished beneath the Dragons in the 16-team table last season. With just two victories to their name all season, the fans of the newly branded Dragons RFC are hopeful and expectant of far better.

| Your first BKT @URCOfficial Dragons RFC team sheet of the season is !!!

“I don’t see any reason why that shouldn’t be the case this year,” says Rowlands.

“A lot of the changes are going to prove positive and enable us to improve on last year. That’s a must.

“I don’t see why we shouldn’t be competing to be the best team in Wales as an absolute minimum.”

Whatever happens under another new banner – the DAM Health Stadium – will be a new experience for Rowlands.

We are all deeply saddened @dragonsrugby to learn today of the passing of former club doctor Richard ‘Dickie’ Johnson.

Our thoughts and prayers are with his wife Sue, family, friends and colleagues at this sad time. #RIP pic.twitter.com/gvLRaJVrdp

“I have never actually played against Edinburgh. I missed the game last year, but the brand of rugby they play now is quite exciting and they’re going to be a tough team to keep a lid on.”

The Scots did manage to make the last eight last season, but went out in the quarter-finals away at the Stormers.

Earlier in the campaign, they won against the Dragons, 30—14, in Newport.

Away from home, the Dragons will be firm underdogs, but Rowlands says it is time for all the regions to replicate the success of the national team in regularly defying the predictions.

“There was quite a lot of doom and gloom in Welsh rugby going into the summer tour. People expected us to be thoroughly beaten, 3-0.

“That was very much not the case and I thought we were in with a chance of winning in all three games. Winning the second one was a good confidence boost ahead of a big year.

Terribly sad news, a lovely , bright and hugely knowledgeable man. My thoughts, love and deep condolences to all his family and friends.

Rugby has lost a great person, who not only became the voice of rugby, but was also respected and much liked by all who knew him. So very sad

“Wales have been good at delivering against expectation over the years.

“Regionally, there has been some good recruitment. There have also been some changes in all the set-ups that will allow us to compete more consistently.

“I’m optimistic for the season ahead.”