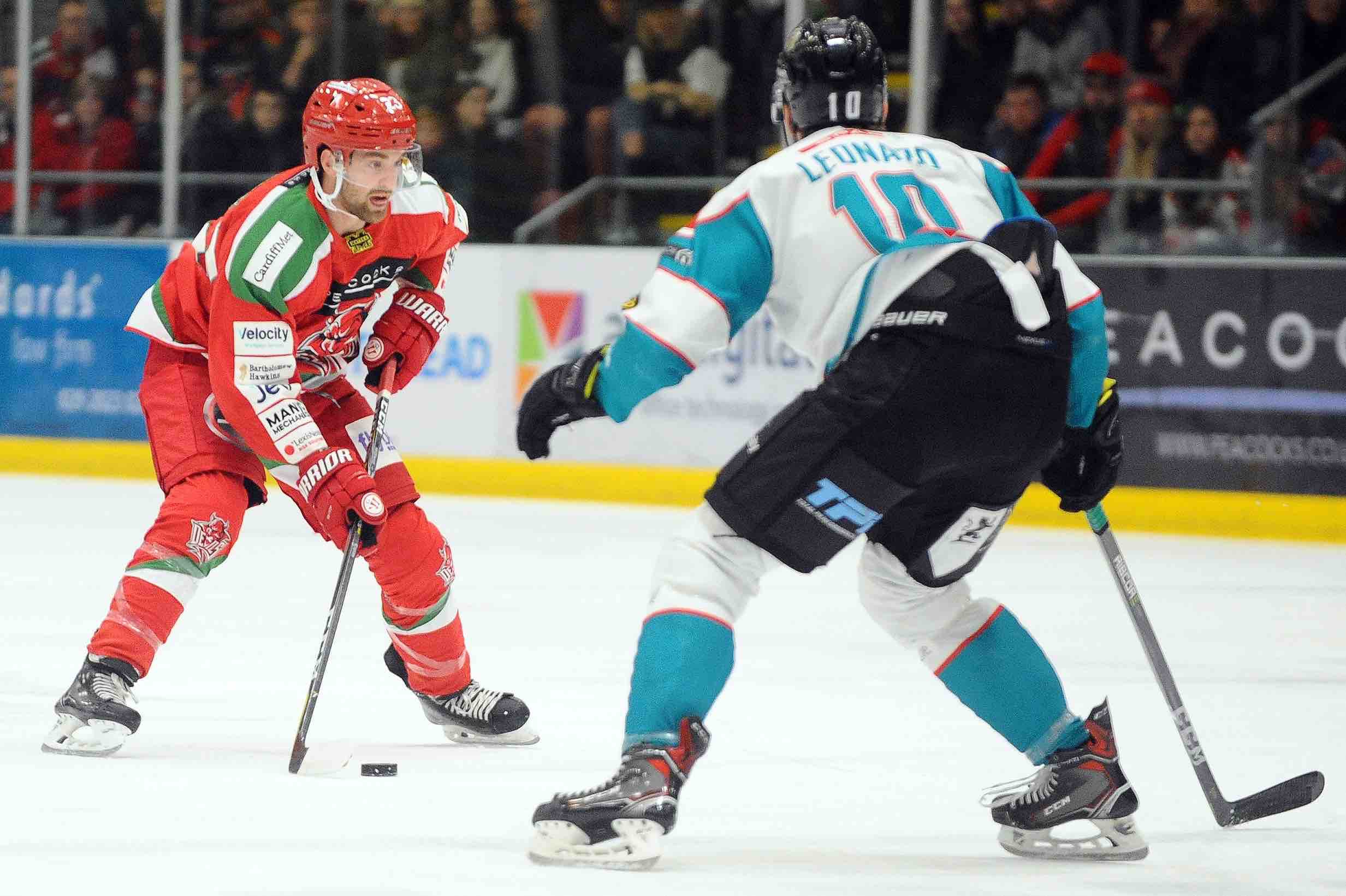 Leaders Giants gave their hosts a major message with a performance which said; “Your reign as champions is coming to an end.”

This was Devils’ worst home defeat since they moved to Ice Arena Wales three years ago.

A sell-out 3,000-plus attendance watched in horror as their favourites were dismantled in clinical fashion.

Head coach Andrew Lord will surely launch an investigation after his team suffered a fourth defeat in five matches.

Confidence, clearly, is low and Lord will hold team meetings, call video assessment groups and may even organise one-on-one chats with players.

Devils owner Steve King was clear in his tweet, saying: “When confidence goes, skating, stickhandling and shooting all go.

“The ONLY way out is uncompromising work ethic, leadership and belief. The answer is inside that room.”

Giants were ruthless. They rightly showed Devils little respect and follow a 4-0 win at Nottingham Panthers on Saturday with another big team display.

Coach Adam Keefe and his Belfast team are in a long run of away matches and have now won nine out of their last 10 – including seven successive victories.

They are a team in brilliant form, but the manner of their success in Devils’ own building was shocking.

Lord is still in the lookout for one more signing to complete a powerful roster, but right now he must put his Devils back on track.

His team face a potential crisis and Lord has this week to calm things down before Nottingham Panthers come to Cardiff Bay on Saturday.

When confidence goes, skating, stickhandling and shooting all go. The ONLY way out is uncompromising work ethic, leadership and belief. The answer is inside that room.

Remarkably, Giants were without Francis Beauvillier, Jonathan Ferland, Colin Shields, former Devils player Matt Towe and Andrew Dickson, but they were far too good for the home team on the night.

Giants came flying out of the traps in the first meeting between the two title contenders this season.

Jim Vandermeer opened the scoring at two minutes 57 seconds after a neat give-and-go with Baun before slamming home at the back post.

Only 90 seconds later Baun fired low past goalie Ben Bowns to make it 2-0, although Sean Bentivoglio cut the Giants lead in half at 25-54 when linked with Joey Martin and scored with a simple finish at the far post.

Belfast were 2-0 ahead even though Devils had outshot their visitors 10-7.

Baun’s classy backhanded finish on the powerplay at 32-43 restored the Giants two goal advantage before Blair Riley scored on a powerplay with a superb one-timer at 34-19.

It was treble top for Baun early in the final period when Pat Dwyer skated the puck into the Cardiff zone and feathered a pass to his team-mate for a clinical finish (40-46).

Jim Vandermeer unleashed a fierce wrist shot from the top of the circle at 42-59 and Baun hammered his fourth of the game at 44-50.

Darcy Murphy made it eight, redirecting a Curtis Leonard slapshot from the blueline at 56-49.

Let the investigations begin. Lord has built a big reputation in coaching circles since taking charge of Devils and now he most show those leadership and man management qualities and find a way to put his team back on course.

Sheffield bounced back from their home defeat 24 hours earlier with an impressive road win in Dundee.

It was a good opening period from the Steelers, who took the lead after only 31 seconds thanks to Josh Pitt. Although the Stars levelled up through Shaun Boutin with 5:09 gone, just over six minutes later the Steelers were back ahead thanks to Jordan Owens – and when Jonathan Phillips popped up with a shorthanded goal with 35 seconds left on the period the Steelers had opened up a two-goal lead.

Stefen Della Roverre struck on the powerplay with 28:17 played for 4-1, before goals from Ben O’Connor and Ryan Martinelli in the final period secured a big 6-1 road win for the Steelers.

Glasgow made it two wins out of two against the Coventry this weekend as they completed a four-point weekend at the SkyDome.

The Blaze had taken a point last night in Glasgow, and started well as Alex Nikiforuk put them one ahead after only 4:12. But the Clan would have the game well and truly turned around before the first period was over. Their fightback started with Rasmus Bjerrum’s tying goal just over four minutes later, before Gerard Hanson put them ahead with 12:20 on the board. A Craig Peacock powerplay goal then made it 3-1 with less than fifteen minutes played.

After four goals in the opening period, the crowd had to wait until the very end of the third to see any more. Having killed off a couple of penalties, Scott Tanski struck at 16:49 to put the Clan 4-1 up and secure the points. Tim Crowder hit back with 1:24 to go and half the deficit, but the Clan held on to the 4-2 win and took both points home.

The Flames’ impressive winning streak came to an end on Sunday night as they were beaten 4-1 by the Panthers – who themselves needed to get a win after losing at home last night.

It was however the home side that made the better start – both sides killing off a penalty each before Ben Davies put the Flames ahead with 9:19 gone. The Panthers levelled things early in the middle session as Ollie Betteridge found the net at 24:26, and then took the lead a second before the midway mark through Jaynen Rissling – Robert Farmer assisting on both Panthers’ goals.

Luke Pither made the game safe with 3:48 to play to make it 3-1 to the visitors, while an empty-netter from Alex Guptill put the icing on the cake for the Panthers with 58:16 played – again, assisted by Farmer.

Devils tickets are on sale now.