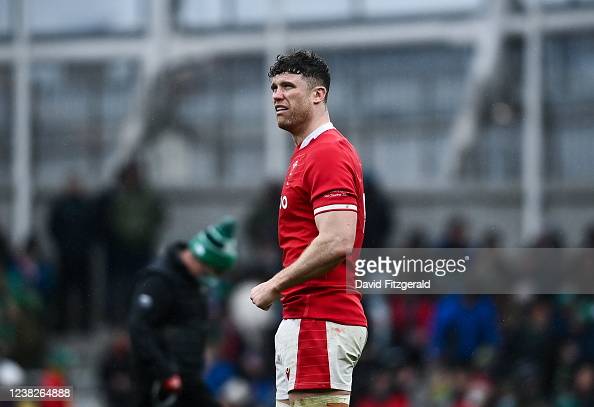 Will Rowlands of Wales during the Guinness Six Nations Rugby Championship match between Ireland and Wales at the Aviva Stadium in Dublin. Pic: Getty Images

Will Rowlands insists it was only ever going to be Wales for him – even though he played his early rugby at the historic core of the English game.

The Dragons second row is preparing to face England at Twickenham on Saturday, having become a reliable force in Wayne Pivac’s pack.

It will be his first visit to Twickenham in a red shirt – for a match that is live on S4C – even though he has played there twice for Wasps in Premiership finals and a couple of times for Oxford University.

The 30-year-old’s Varsity appearances came after he learned the game at Rugby School, making him appear to possess the classic rugby heritage of wearers of the red rose from years gone by.

But despite his English public school upbringing, Rowlands’ family roots are in Wales – his father Jeremy is from Pontllanfraith near Newport – and he insists there was certainly no identity crisis when it comes to the country he wanted to play for.

“All the rugby in my background is from the Welsh side of my family – my parents and my grandparents,” says Rowlands.

“That was always made apparent to me growing up, even though I was raised outside of Wales.”

Neither does he want to be pigeonholed as an entitled old school tie type, who had it all given to him on a silver salver. When it came to making it in professional rugby, he insists, it has been exactly the opposite.

“There is a stereotype around people who went to public schools in England, that it gives people an air of entitlement in life,” says the Dragons’ 6ft 8in and almost 20sts forward.

“But that’s not something I have. The school I went to certainly produced grounded, well-rounded individuals. It wasn’t elitist, like some all-boys public schools that have certain reputations.

“I am always a bit nervous about that because it’s easy to stereotype people. Sometimes, it’s warranted but I don’t think it applies to me.

“I try really hard to not to live up to that stereotype at all. In many ways, although my path has been helpful in a personal sense, it’s not the path you would choose if you wanted to maximise your chances of playing professional rugby.

“I was late coming into the game and late into the professional set-up. That has added fuel to my fire.”

Wales fans will be hoping those flames are well-stoked next weekend when the Six Nations champions will look to Rowlands to put the heat on England.

He certainly proved too hot for Scotland to handle in Wales’ last game, with his aggressive ball-carrying and tackling and rock solid work in scrums and line-outs.

Rowlands – who, in many ways, has filled left the gap left in the Wales team by Jake Ball’s move to Japan – went from Rugby School to Warwick University and then on to Oxford.

So, there were no rugby academies and for a time, when Wasps loaned him out to Jersey Reds, it looked as if he might even fail to make it as a top line professional.

He admits that Wales stars Dan Biggar and Ross Moriarty sometimes rib him over his posh roots but says: “I am glad that I had the path into rugby that I’ve had, because I really appreciated being out of the rugby bubble and I had grown up a bit before coming into it.

“Some of my best mates are still ones from school and university. But I also now have a lot of great mates from rugby.”

One of those is England second row Joe Launchbury – Rowlands’ old teammate at Wasps – who has been recalled to the squad by Eddie Jones and the pair could well be squaring up at the first line-out.

“In the past, I looked at Wales-England games – and all the rivalry – and it was always one I wanted to play in,” says Rowlands, who will win his 16th cap at Twickenham.

“I know a lot of the guys who will be involved and I’ve known them for years. The chance to play against a good mate of mine like Joe Launchbury would be fun.”

Wales are also looking to him to fill the void in streetwise experience left by the injured Alun Wyn Jones and Ken Owens.

He adds: “I do enjoy having responsibility and for the small areas of the game I have responsibility for here. I don’t necessarily always find being in positions of leadership that easy.

“But I think in my career so far, when I have been responsible for things, I tend to perform better. It’s something I like having.

“It started in the summer, when there were guys away on the Lions tour and some others were injured.

“It was a very young squad and that carried through into the autumn and this tournament.

“It does force the guys with a bit more experience to step up. I don’t have loads of international rugby experience but I have been around different rugby environments – and general environments outside of rugby – a bit more than some of the younger guys here.

“I hope that I bring a bit of maturity in some areas.”

Wales will hope that is the case on Saturday.