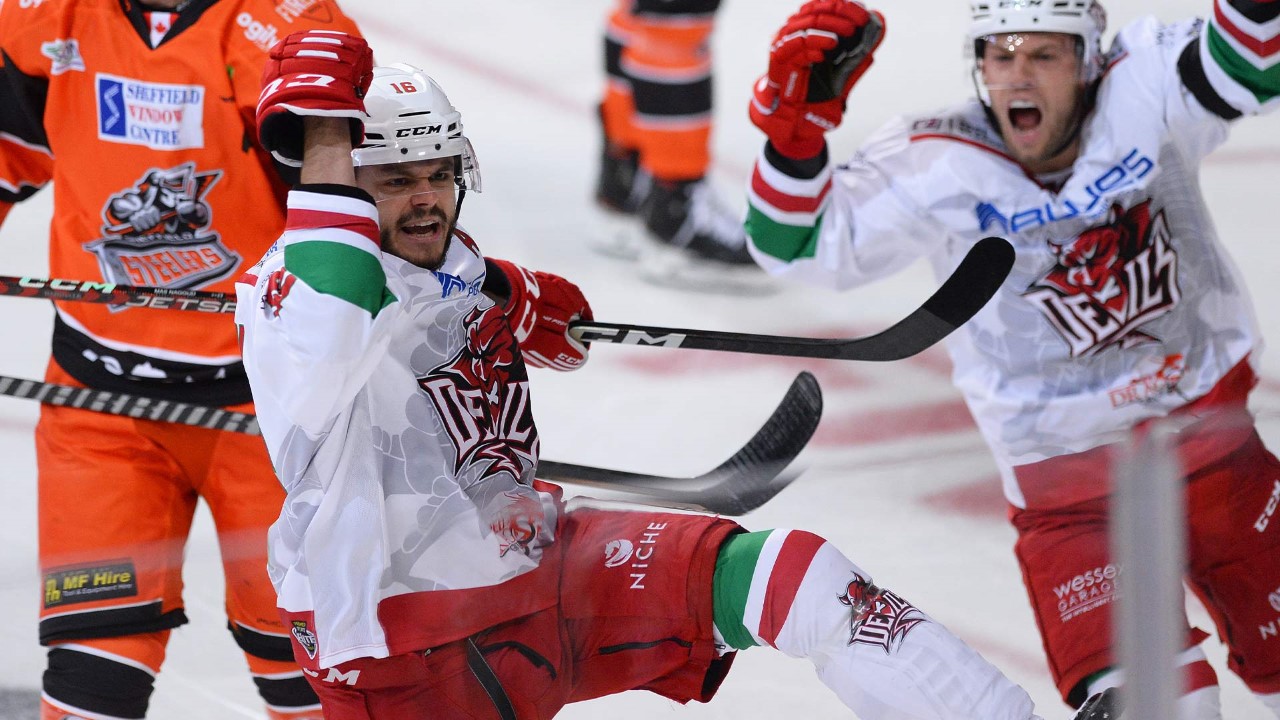 Team GB winger Sam Duggan lit up the opening night of the Cardiff Devils season, scoring twice to lift his team to a 3-1 victory over Sheffield Steelers.

Duggan had a hand in all three goals as the Devils ground out a hard-fought win that was aided by a 29-save performance from returning goaltender Ben Bowns.

The Devils head home looking to complete a four-point weekend in front of their visiting Calgary-based owners for this evening’s visit of Manchester Storm (6pm).

Storm suffered a 5-4 overtime defeat to Coventry Blaze in their home opener last night, and Ice Arena Wales is again close to selling out with Devils fans holding high hopes that the team can again challenge for silverware.

Following a career-best six goals in the EIHL last season, Duggan is not a player typically renowned for his goalscoring prowess. However, Devils coach Brodie Dupont will have no complaints on seeing his fourth-line winger step up his offensive contribution and will be hoping the hot-streak continues.

Duggan, who also incidentally scored twice in the Devils’ final pre-season outing against Nottingham a week ago, put the Devils ahead in Sheffield, beating goalie Matt Greenfield four minutes in.

It would prove to be a forgettable night for the Steelers debutant, who stopped just nine of the 12 shots he faced.

The American allowed a second goal early in the second period when Josh Brittain scored after Duggan forced a turnover.

Adam Raska, assisted by former Devil Brandon McNally and Jonathan Phillips, briefly cut Cardiff’s lead, before Duggan settled the game with a one-time effort from Trevor Cox’s precise pass, to claim his second goal and third point of the night.

Sheffield upped the ante in the final period, outshooting the Devils 12-2, but they found Bowns in stubborn form, whilst Riley Brandt dropped the gloves with Evan Mosey in a scoreless, penalty-filled period.

After seeing his team see out the win, Dupont believes his team’s strong start and game management proved decisive.

“We were really happy with our start,” he said. “In the first five minutes we really wanted to get them on their heels if we could.

“That goal [Duggan’s opener] was huge and we felt like they turned the tide and really took it to us in the last half of that first period.

“Obviously when they scored, this place got rocking, but I was proud of our guys for just managing that.

“It was a good game on both teams’ ends. It’s obviously a big rivalry so that was a big win for us.”