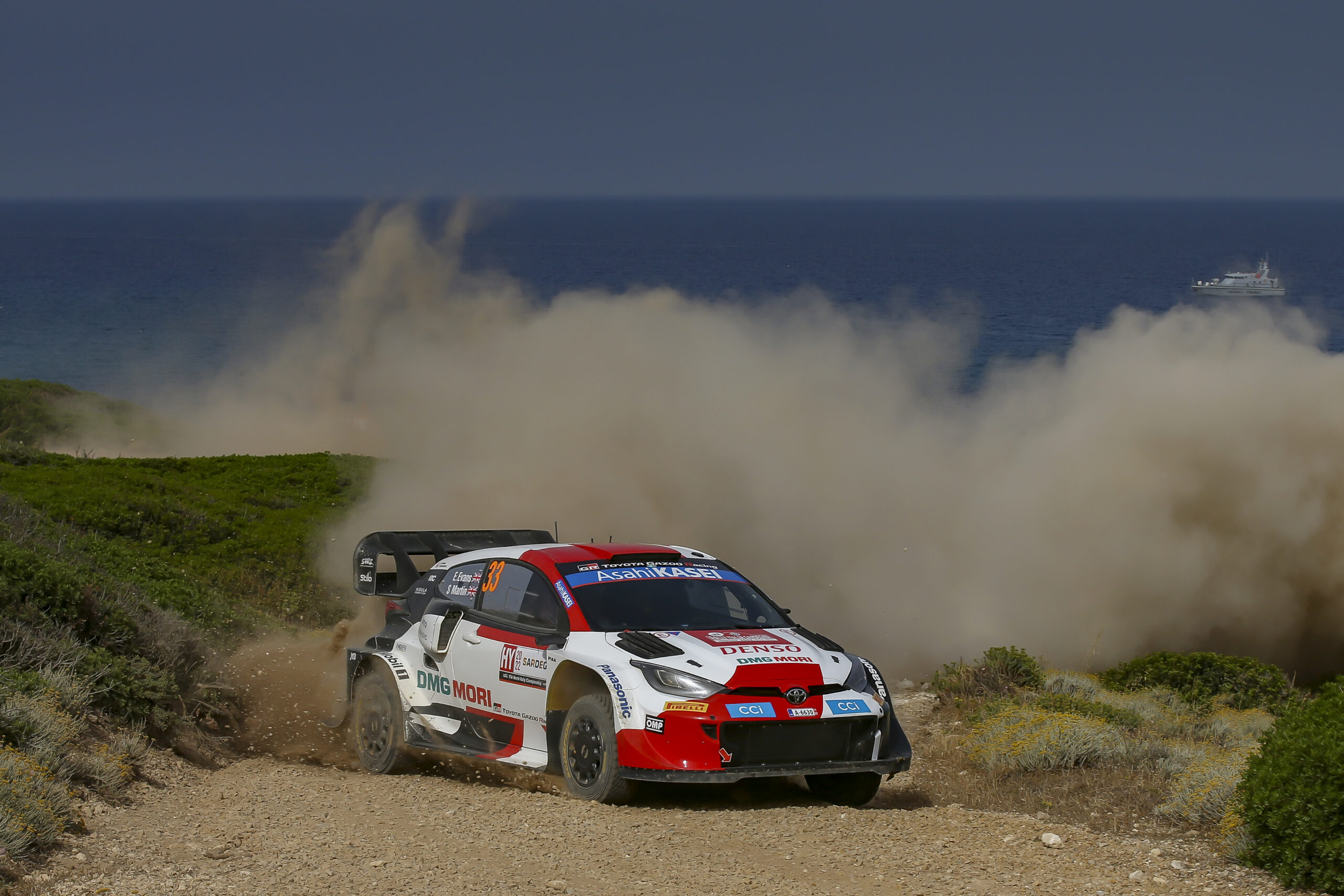 “Some points are better than none.”

It’s a horrible last resort, let’s try to be positive, sporting phrase that’s pulled from the bottom drawer when realistically all hope is lost.

You’re going to be knocked out.

Or in Elfyn Evans’ case, you’re sadly very unlikely to be world rally champion this year.

The latest blow came in Sardinia, where once again rally winning speed didn’t turn into the maximum-points scoring victory that he so badly needed.

With the @TGR_WRC GR YARIS Rally1 battling high-speed jumps, rocks and trees that are all ready to punish the slightest mistake, perfect pace notes and a telepathic understanding are vital✍️#WRC #RallyItaliaSardegna #JumpingInTheDust💨 pic.twitter.com/xyR3N9KZRU

If anything, retiring twice from the same event was something of a low point.

Evans took the lead on SS2, but a water leak in his Toyota Yaris Rally1 saw him retire on Friday after SS3.

“The feeling was quite good in the car this morning,” said Evans at the end of day one.

“The opening stage was difficult with the amount of dust, but the time was good.

“Then, in the second stage, we had quite a bad compression through a dip in the road that caught us by surprise and damaged the underside of the car.

“We started to get some warnings in the car and tried to manage it as best as we could until the end of the stage.

Back home after another difficult weekend @Rally_d_Italia . The feeling in the car was positive and when we were going, things felt good and we knew the pace was there. But coming away with a handful of points is not great and we obviously wanted more. @TGR_WRC #EE33 pic.twitter.com/Jh8teSezLI

“But after that, when we investigated it further, it was quite clear it was too difficult to repair at the side of the road in the time we had.”

He re-joined on Saturday and despite the disadvantage of running first on the gravel set a strong third-fastest time in SS15 – before suspension damage put him out again.

All that was left was for Evans and co-driver Scott Martin to save their tyres for Sunday’s concluding Power Stages and launch an all-out attack for bonus points.

Evans stopped the clocks third fastest – a measly three points was his reward for a very hot and dusty weekend’s work.

“We were aiming towards the Power Stage and although we didn’t come away with as many points as we would have liked, some points are better than none,” added Evans.

“It’s another difficult weekend for us but there were at least some positives to take away from it, with some good moments inside the car in terms of stage times and in terms of feeling once again.

There wasn’t a lot we could do today in terms of competition so we used the time to try a few things and learn more about the GR Yaris. The conditions weren’t ideal and it was frustrating to end the day early but we still keep trying #EE33 @TGR_WRC pic.twitter.com/3wFtYJue8J

“The speed was quite good at many points, but things just didn’t go our way.

“Now we try to improve for Kenya.”

Of course, with eight rounds of the FIA World Rally Championship remaining, the title fight isn’t over.

Yet from the first five rounds, and from a possible 150 points, Evans has amassed 39 points.

This is criminally few considering Evans has been challenging for victory on every round and has lost huge amounts of time on event rally except Portugal, where he finished second.

Yet with series leader Kalle Rovanperä on 120 points, 81 points ahead, Evans’ fate is already out of his hands.

He needs his young Finnish team-mate to have an absolute mare of a second half of a season.

It would be helpful if the other drivers ahead of him hit a poor run of form too.

But most of all Evans’ fortunes must turn a full 180 degrees before hopes of becoming world champion in 2022 return.

All that we can do is agree with the simple fact that yes, some points are indeed better than none – and hope for a miraculous change of fortune next time out on the Safari Rally in Kenya.