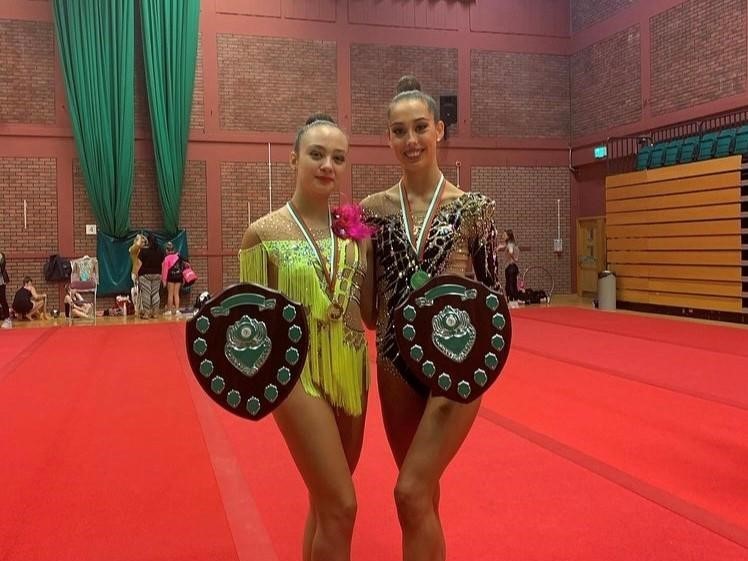 Growing up in Llanelli, Elizabeth Popova was in awe of the older gymnasts at her gym.

So much so, that as a toddler she would copy and learn their routines, beginning a lifelong love for the gym and rhythmic gymnastics.

But the Carmarthen-born 15-year-old – who will be among the youngest athletes representing Wales at the Commonwealth Games in Birmingham in July – was brought up with a love of all sports, coming from a family who lived and breathed sporting enjoyment and excellence.

Her mother, Ioana, competed for Bulgaria in international gymnastics tournaments, while her father, Petar, was a professional Bulgarian basketball player.

Hailing from the capital city Sofia, the family made the move to Wales around 20 years ago. As keen athletes themselves, Ioana and Petar Popova sought to instill a love for sport in their two young children.

The Welsh Artistic Gymnastics Team at the end of their prep camp 🏴󠁧󠁢󠁷󠁬󠁳󠁿🤸‍♂️@WelshGymnastics #TeamWales #Commonwealthgames2022 pic.twitter.com/7WLv5oPg1j

Elizabeth was able to enjoy lots of sports both at home and at school before choosing rhythmic gymnastics, but she stresses the importance of playing lots of different sports with her friends and family.

“I was always in the gym from when I wasn’t even walking, sort of falling around and crawling about. I properly started joining in with classes when I was around four. I was quite young, but I loved it, so I didn’t mind,” she explains.

“I also used to go to my brother’s football games. I’d be messing about in the fields, trying new things. I played some football, just a kick-about to have some fun.

“When I was younger, I never took it as seriously as I do now. I just used to have fun and do what I wanted to do, and I eventually stuck with rhythmic.

“It builds a lot of character being in a sporting environment. You learn how to work in a team and how to support each other.

All gymnasts and coaches will now travel to Barcelona for their final preparations before they head into the village 🇪🇸#PobLwc to all gymnasts & coaches 🍀 pic.twitter.com/tDoOSxQRR7

“It has helped with my confidence and if I am struggling my parents can always advise me as they have been through similar things.”

Not only have Elizabeth’s parents competed at international level, but her brother Chris has also been impressing with his football skills.

He has featured for Manchester United and Leicester City for their Under 18’s teams, scoring 15 goals in 20 appearances for Leicester in one season before progressing to Premier League 2.

Chris has also gone on to join the family as international athletes – representing Wales age-group football teams at U18s and U21 level.

Elizabeth grew up watching her mother coaching gymnastics and was captivated with the sport from a young age.

It's the final countdown… 🎶

To celebrate the final days before @birminghamcg22, we'll be sharing some fun facts along the way. #Didyouknow our 10 days to go fact? 🤸 #CommonwealthSport | #B2022 | #CommonwealthGames pic.twitter.com/DCX7uBYCZg

“I always did rhythmic because my mum was coaching so I’d be in the gym watching her. In school, I did a lot; the school involved us in a lot of sports, like running and athletics. I just really enjoyed doing different game.

“My mum was also coaching artistic gymnastics, so I had a go at that, like the bars, and I would get involved with the younger girls, but I was always focused on the rhythmic.

The Popova family have a rich and varied sporting background which has provided so many memorable experiences.

“My parents help a lot with preparation, obviously with my mum being my coach. We have been through a lot together, but it’s nice to finally put all my work towards something.

Share how your club used Rise Gymnastics Week using #RiseGymnastics and let us know what you thought of our exciting programme! ⭐ pic.twitter.com/SZBYFhdLuc

“Whenever you are with someone 24/7 it can be difficult, but she has always done everything with my best interests at heart and I really appreciate that, even if I don’t show it at times!

“They have both been so supportive of me, so I’d love to be able to perform well in these Games for them and for everyone that has helped me.”

The Popova family recently moved to the North of England. Elizabeth has been impressing while studying at Wade Deacon High School in Widnes, while Chris has continued to develop as a footballer.

The siblings have a close relationship and have often trained side by side.

“Our parents are like taxi drivers, but I love knowing what Chris is up to in Leicester. I don’t see him as much as I used to but we always try and have a catch up.

“I went to watch Chris play for Wales U21’s at Parc y Scarlets and, hopefully, he will be able to come to see me at some point, but he is very busy.”

Elizabeth has high hopes for the next few months and especially for Birmingham.

“I’m very excited. It’s my first Games, so the preparation for it has been unlike anything before.

“Now that I am in the kit it’s just surreal. So, I am very excited to go there and experience it for myself.

“My mum and dad are very excited too. They have sorted their tickets already.

“I have just come back from an injury, so at this point I just want to do the best that I can do. Obviously, I’d like a good result, but I am just going to focus on putting on my best performance on out there and then everything will come from that.

“Just being part of the team and representing my country is going to be amazing.”