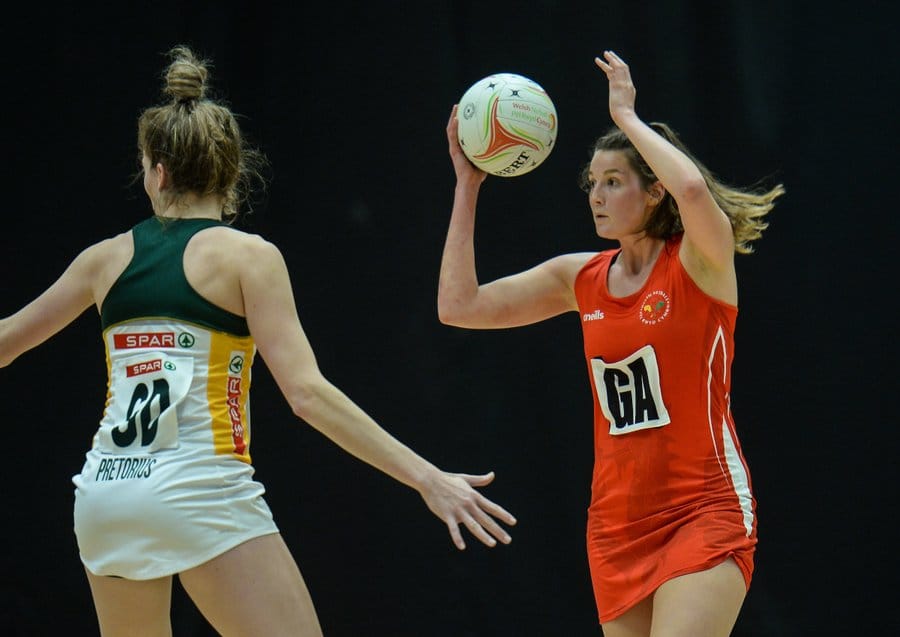 Betsy Creak is living proof that self-belief can take you a long way in sport – all the way to international caps for Wales.

The Bath netball star – who will be part of the Wales squad facing South Africa in back-to-back matches this week – came late to the elite end of her chosen sport.

A student at Bristol University, Creak rocked up to a Wales trial three years ago when she was already 22 and used to placing student social life ahead of any commitment to play for her country.

But that session led to a Wales debut against Malawi in 2019 and the goal attack is now a key member of the Wales squad who face the South Africans on Tuesday and Wednesday evening in Cardiff in matches that will be streamed live by S4C.

Creak was so impressive in that series against Malawi that Team Bath – one of the most successful teams in the Vitality Netball Superleague – soon came calling.

📢Less than a week until we face @Netball_SA at Sport Wales!

Tuesday's game is almost sold out and we have limited availability for Wednesday's game!

You can get your tickets by clicking the link below ⬇️https://t.co/gDFudisOIg pic.twitter.com/PDQYiuUI0x

“I went to the Welsh open trials and I wasn’t sure about going, but I was convinced to give it a go and I got selected, which was amazing,” says Creak, who grew up in Oxfordshire.

“I had a few training blocks with the senior team before my first Test series against Malawi in July 2019. That all kind of kick-started everything, I guess.

“Playing netball at that level wasn’t really in my thoughts up until then, really. I was just enjoying it, but when I switched from defence to attack when I was at university, after being a goalkeeper, I started picking netball over things, such as social events.

“I have just taken every opportunity that I have been lucky enough to receive and I want to continue to do that as long as I keep enjoying it.”

The attacker has not looked back since, looking at ease at Super League level, winning bronze and silver medals from her first two Superleague seasons for the blue and gold.

The 25-year-old has scored 289 goals in 43 appearances for Bath and has added significantly to Wales at international level – meaning she will be a key player at this month’s Commonwealth Games in Birmingham.

Not only that, but Creak has achieved all this while working as a biology teacher before switching jobs to work in the solar energy sector.

“It has been really busy at times, but as long as you set aside time for yourself it’s all good,” she insists.

“When it all started I was a biology teacher in Bristol, so it was all pretty hectic to balance.

“Covid hit, which was a bit of blessing in disguise, because I was able to re-set I changed job at the time to become an operations co-ordinator at British Solar Renewables, a solar energy company, which is a job I love and allows me to put a bit more into my training.”

Wales face South Africa in two fixtures at the Sport Wales National Centre, both of which start at 18.45pm.

“Since we last played them a lot has changed, we are a different side, we have worked on a lot,” adds Creak.

“But South Africa are such a good team it will be a huge test for us.

“We can’t tell what the score will be but we know we can challenge them. It’s all about challenging ourselves at the top level as well against a team like South Africa, so we have to be at the top of our game, going into the Commonwealth Games.

Wales will also face the South Africans in their tough group at the Commonwealth Games, so these two matches will come with some added edge.

For Creak it is her first Games experience and she is excited to be a part of it and compete against some of the best teams in the world.

“We have a tough pool in the Commonwealth Games, but that doesn’t mean we can’t challenge the other teams.

“I think if we play to the best of our abilities we can push these big teams and do ourselves proud. Hopefully, we can inspire the younger girls coming up to be in the position that we find ourselves in now.

“I can’t really put it into words what being selected means to me, but also I don’t really know what to expect.

“The Commonwealth Games is such a big occasion, but I am looking forward to it. It’s what we play for and I will hopefully enjoy the experience.

“My mum has booked quite a few tickets for everyone to come along. We are just trying to sort out my grandpa who really wants to be there even though he’s 90 years-old .

“Hopefully, we can sort that and he can come and watch, because my family haven’t been able to see me play often because of Covid.”

“So, he’s very excited and I am really hoping he can come.”

Live coverage of the first Test in the international netball series between Wales and the South African National team, the Spar Proteas. English commentary available on S4C Clic and the S4C YouTube channel.

Live coverage of the second Test in the international netball series between Wales and the South African National team, the Spar Proteas. English commentary available on S4C Clic and the S4C YouTube channel.