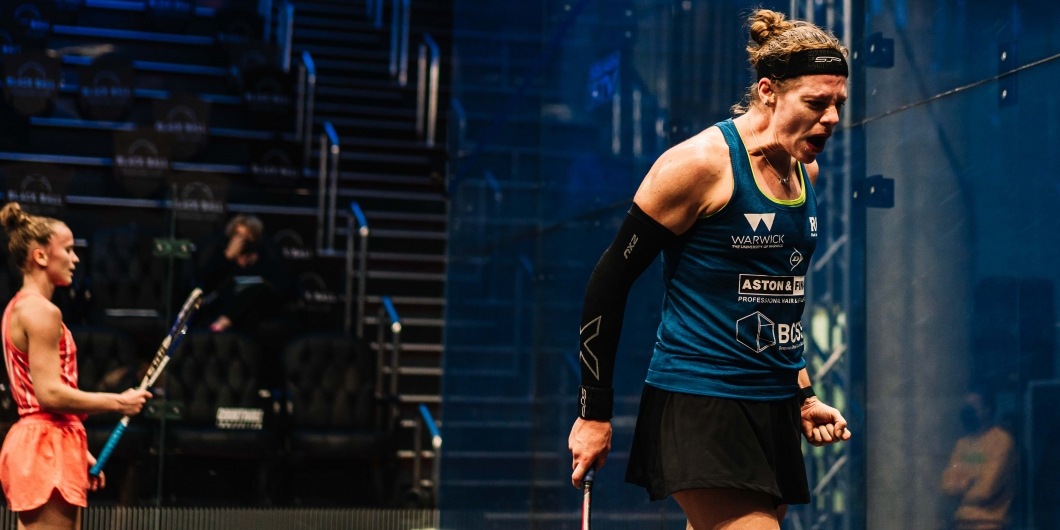 Emily Whitlock (back of court) pushed Sarah-Jane Perry all the way before No 5 seed won in deciding game.

Emily Whitlock came agonisingly close to producing a major shock at the CIB Black Ball Open in Cairo before losing to No 5 seed Sarah-Jane Perry.

Whitlock saved match points in the fourth game to take the match into a decider and saved further match points before Perry edged their 1st round contest.

It was Whitlock’s first competitive game since March – when she also lost in the Black Ball event 3-0 to Perry.

“When I saw the draw, I was happy in a way, because the last time I played before the lockdown was here, against SJ. I was riddled with tendinitis; it was such a bad time for me,” said Whitlock.

“So, in a way, I wanted to see the progress I had made.

“I wanted to win so badly obviously, the positive is that it’s much better than in March, but I’m so disappointed I couldn’t hit my shots cleanly enough.”

Macclesfield-born Whitlock reached a career-high 12 in the world in October 2017, but is now ranked 28.

“Since 2017, I’ve had so many injuries, so many things happened,” she added. “I moved to Wales in August and I have a much better physio now.”

Wales’ world No 9 Tesni Evans, meanwhile, will be back in action in Egypt tomorrow (Wednesday) for her second round game against world No 13 Olivia Clyne of the United States.

The last time the duo met was in the Tournament of Champions in New York in January when Evans suffered an ankle injury that ended her season before COVID-19 saw squash suspended.

Evans booked her second round spot with a 3-1 victory over England’s Lucy Turmel, recovering from losing the first game.

“My physicality is something that I’ve been struggling with since the start of the season and something I’ve been working hard on over the last block,” said Evans.

“I’m really happy because if anything I had to grind and run out today, which isn’t really my style, but I think I needed that blow out and hopefully it will stand me in good stead.”