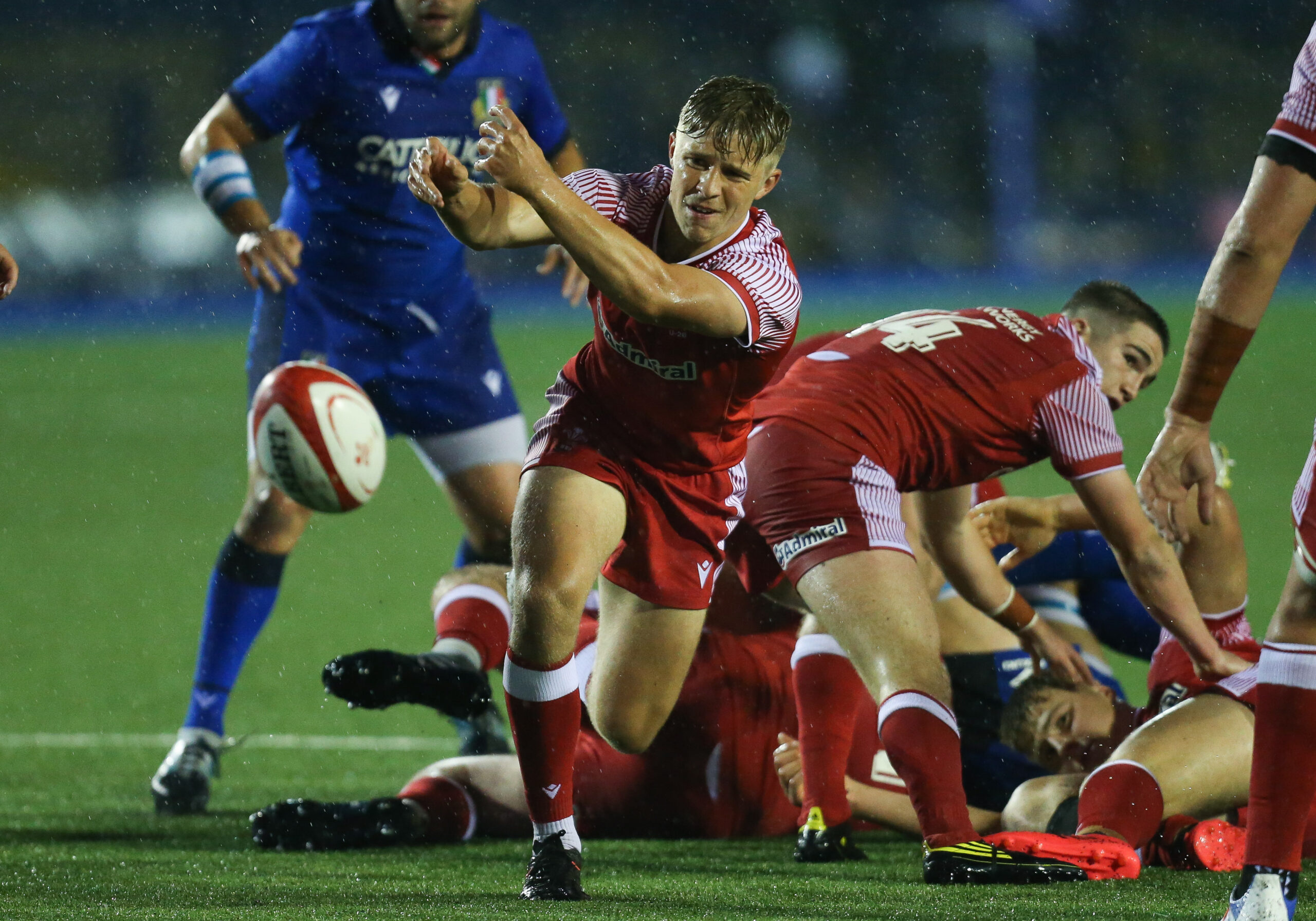 Wales U20s are back in action on Thursday at Cardiff Arms Park, when they take on France in the Six Nations. Coach Ioan Cunningham has made eight changes from the side that lost to Ireland, including drafting in scrum-half Ethan Lloyd. The Cardiff player told Tom Prosser why he’s eager to make a big impression on his home patch.

Ethan Lloyd wants to put pressure on Tomos Williams and Lloyd Williams at Cardiff Blues – but for the moment he’s happy to try and turn the screw on France in the U20 Six Nations.

The Wales U20 scrum-half is already making waves at Cardiff Arms Park where there are high hopes he can follow the same route as Tomos Williams from Treorchy to full senior caps.

But on Thursday Lloyd will be concentrating on international duties at age group level as Wales bid to bounce back against the French in a match that is live on S4C.

“At the Blues I like learning off both Tomos and Lloyd Williams and it’s great picking things up from them and having them there to get advice from,” says 19-year-old Lloyd.

“It’s in the back of my mind about competing with them for a place in the Cardiff team, but right now I’m just looking to learn and impress in the U20s Six Nations.

“I have also always enjoyed watching other scrum-halves, such as Australia’s Will Genia. I love how he does the basics so well.

“This is definitely something I try to base my game on as the basics are so crucial to bringing energy to your game.”

Ethan Lloyd is hoping Wales can recover quickly from their defeat to Ireland with their best performance to date against the French following a workmanlike opening win over Italy.

“We haven’t had a chance to fire yet,” admits Lloyd.

“We have spoken a lot about starting well. It’s important to get a stronghold in the match.

“In our first two games, we have had to do a lot of defending early on and I think it sets the tone for the game as a whole.”

With Wales currently third in the U20 table, this is a key fixture for both teams given they have each lost one of their opening two games. Only the winner of this match can still have realistic hopes of claiming the coveted U20s Six Nations title.

“They are a typical France team that are physical, unpredictable and dangerous in attack,” adds Lloyd.

Live regional rugby over on our Facebook page from 19:20 tomorrow night! pic.twitter.com/KksqSjO525

“It’s important we control the possession and territory so we can play the game the way we want to instead of a game that will suit France.

“I think we have got a lot more to give in attack and to do that we need to focus on the basics such as passing well and not giving away any stupid penalties.”

Lloyd is from the Rhondda and started his rugby journey playing for his local teams.

“I started my rugby journey with Ystrad Rhondda and then Treorchy. I developed through the schools system and have been with the Blues (now Cardiff Rugby) ever since,” added Lloyd.

All the U20s teams have been required to form a bubble for the duration of the tournament. This is something new for many of them and for some it’s the longest they have spent away from home.

The Wales U20 team to face @FranceRugby 🐓

Prior to the last game, Wales coach Ioan Cunningham showed his players a video of good luck messages from their family and friends.

“It’s good being with the boys again as obviously we’ve all had to spend a lot of time in our own homes over the last year,” added Lloyd.

“We’ve been playing lots of ping pong at the hotel – it is important to do things like that to have a break from rugby, particularly coming off the back of a defeat.”

For France it has been a mixed bag of performances and results so far.

They squandered a 16 point lead against England in their opening game which consequently saw them lose, 38-22.

In their last game they beat Italy by the slender scoreline of 13-11. France were far from convincing, though, and Italy had chances to snatch a win late in the game.

Members of the French squad include back rower Théo Ntamack, the younger brother of current France fly-half Romain, and son of Toulouse and France legend Emile.

They also have some Celtic-Gallic flavour in their mix with Joshua Brennan, the son of former Ireland and Leinster back row man Trevor Brennan, who settled in France after the end of his playing career.

Join the Clwb Rygbi team live at the Arms Park for live coverage of the rugby match between France and Wales in the Under-20 Six Nations Championship. English commentary available. K/O 5.00.