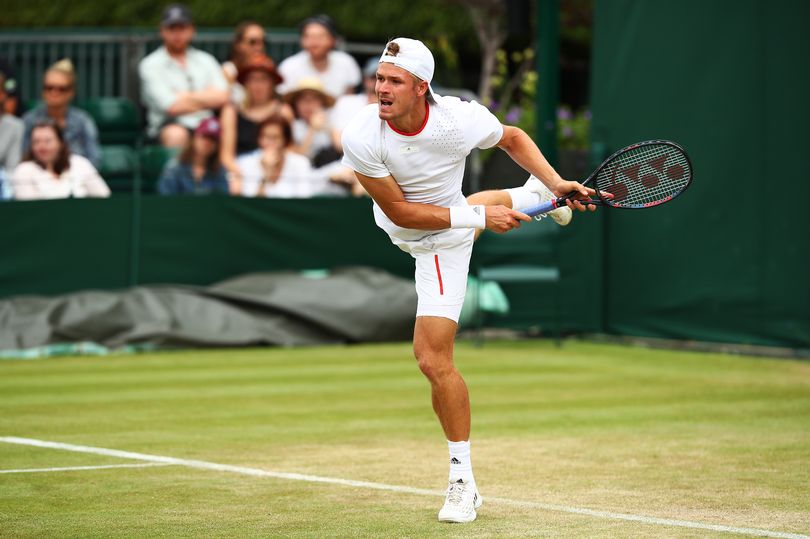 The sun is shining, spring is in the air and also in the step of Evan Hoyt – Wales’ top ranked tennis player – who is finally nearing fitness. It’s been a long road back for Hoyt who told Graham Thomas there were times when he wondered whether he would stay the course.

Evan Hoyt has admitted his latest injury setback has been the most difficult of his career and led him to even question his future in tennis.

Wales’ number one player is currently in Spain, recovering from a knee injury that has sidelined him since last summer.

The 2019 Wimbledon quarter-finalist says he has come through some dark times over the past few months, but is now determined to battle through and climb back up the world rankings.

Still only 26-years-old, Hoyt has already suffered enough injury problems to test any athlete. But having defiantly dealt with shoulder injuries that took away 18 months of competing, the latest setback hit him hard.

Ironically, it happened not on the court, but during a yoga session – although surgery afterwards showed the wear and tear on his cartilage was an accident waiting to happen.

“Some people might think injuries get easier to deal with as you get older, but in fact, I’d say it’s exactly the opposite,” says Hoyt, who reached the last eight of the Wimbledon mixed doubles two years ago, alongside playing partner Eden Silva.

“When you are younger, you brush injuries aside because you’ve got so much still ahead of you.

“As you get older, then different pressures pile up – especially when you’re at the point that I am where you’re not really earning a good living from the sport.

“The doubts do creep into your mind whether you should continue going with it, or whether you’d just be better off packing the whole thing up, calling it a day, and go off to do something that’s more secure, financially.

“Certainly, those thoughts have come into my mind over this most recent period. But I think I’ve come out of the other end of that now – I’m feeling good again and I want to go on.

“But I would definitely say that out of all the injuries I’ve had in my career, this has been the most challenging, mentally.”

Hoyt is now looking at returning to full fitness in April or May, which should coincide with the post-pandemic return of many tennis tournaments around the world.

His rehabilitation has reached the stage where he says he is running at 80 per cent of full speed, but still finding discomfort when he tries to put on the brakes.

“I’ve never really had knee problems before, so it’s been frustrating,” says Hoyt who grew up in Llanelli but was spotted as a talented teenager, put into the Great Britain age-group squads and went on to win the Junior Davis Cup.

“I got injured last June and I suppose the silver lining was that there wasn’t much tennis going on so I wasn’t really missing anything.

“In one sense, I have enjoyed the break because I was going through a period where I wasn’t playing so well.

“A few weeks’ break may have done me good, but then a few weeks turned into a few months.”

One of the events he did miss was the Battle of the Brits – a well-received domestic shoot-out that seemed to feature everyone in UK tennis apart from him.

What has brought him back from those low moods, he says, was a realisation that he needed the support of others as well as himself.

“I think it’s natural to have the doubts. But this time I would say it’s been the most difficult because there were times when I just thought, is this actually worth it all?

“I think the trick is communication – just talking about those feelings with people. It’s not something that perhaps comes naturally to me and I’ve had to work on it.

“In the past I’ve tended to try and internalize all those thoughts, but this time I’ve tried to reach out and discuss things with my girlfriend, my family and my team about how I’m feeling. That certainly helped me during this period.”

Before his headline-grabbing Wimbledon adventure, Hoyt was busy winning a clutch of singles and doubles titles across Europe, America and Australia on the ITF World Tennis Tour, as well as reaching a number of other finals.

The right-hander reached a career high World ranking of 319 in singles and 217 in doubles back in the summer of 2019 and still feels there is plenty of unfinished business – and unclaimed ranking points.

Evan Hoyt Is Grounded In Portugal . . . But Mind Over Matter Is Keeping Him Busy https://t.co/eGxfokNUTz via @Dai_Sport_

Having returned to Wales for the early part of his recovery, he is now back at his base in Spain and planning for a return to competition this summer.

“Tennis has brought me plenty of ups and downs, but there has been so much travelling, so many stories to tell and great people I’ve met. So that’s one of the major reasons I want to continue playing.

“I know I can still get better at this sport and I’ve got the game to improve.

“Individual sports like tennis and golf are so mentally challenging because you’ve got to be your own best friend out there. You have to push yourself as hard as you can, but also be kind to yourself when you need to be. It’s tough.

Evan Hoyt’s clean forehand 🧼 🗡 🎾
Clean forehand technique from Evan. This video focuses on his off hand and the pivot of the outside foot as he prepares to strike.⠀

“But I still believe I can get up higher in the rankings. The mental aspect, that’s an area where I can still to improve. Everything starts from the mental side.

“You need to handle nervousness, anxiety, stress and all of it.”

And a well-earned respite from shoulder and knee injuries would provide a helping hand, too.