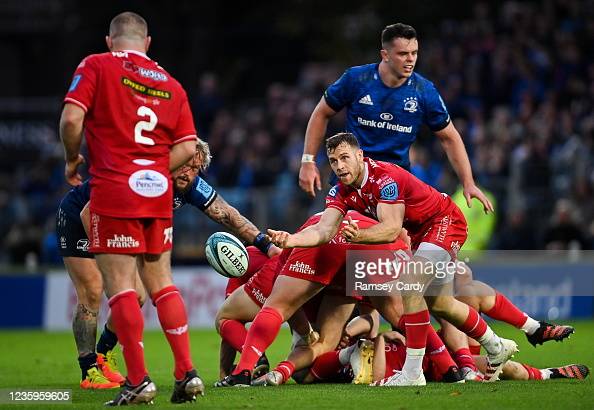 Gareth Davies during the United Rugby Championship match between Leinster and Scarlets at the RDS Arena in Dublin. Pic: Getty Images

Wales’ four rugby regions have been left counting the cost after new restrictions imposed by the Welsh Government to combat the spread of the Omicron variant of Covid-19 saw professional sport effectively forced behind closed doors.

A strict limit of 50 spectators was placed on sport at all levels in the country on Wednesday with the new measure coming into effect on Boxing Day and no timeline yet set for when they might be lifted – although the costs such as stewarding and policing for professional clubs make it impractical to admit such a small crowd.

It means the sold-out United Rugby Champions clash between Cardiff and Scarlets on December 26 will now be played without spectators at Cardiff Arms Park, while the match between Dragons and Ospreys had already been called off due to Covid.

Cardiff’s trip to Newport to face the Dragons and Scarlets’ home match with Ospreys on New Years’ Day will both be affected by these restrictions too, although minister Vaughan Gething confirmed a £3m “Spectator Sports Fund” will be made available to clubs and venues across Welsh sport affected by these measures.

All tickets for the postponed Boxing Day vs @dragonsrugby will be valid for the rearranged fixture. However, we appreciate many of our supporters may not be able to attend the game when it is played

Even so, this latest news has dealt another significant financial blow to the four regional clubs and Dragons chairman David Buttress is among those who have spoken out about the effect it is likely to have, being particularly concerned with the monetary support being provided.

“Nobody should underestimate this,” Buttress wrote in a Twitter post. “It is devastating for professional rugby and sport.

“We have done everything to support, comply and drive [and] support Covid community initiatives.

“I may not be thanked for being frank, but this is horrendous news for us. This is brutal news.”

In another post, he added: “The support they’ve put in place is inadequate, we have not been consulted and we have to make our case.

“Imagine the pressure we are all under already, politicians need to recognise their decisions have huge implications and they need to support them with accessible financial aid.”

Buttress’ concerns have been echoed by his Scarlets counterpart Simon Muderack, who is all too aware of the effect the pandemic has had on the finances of the Llanelli-based club and their rivals over the past two years.

“The derby games are significant windfalls for us, they’re a big part of people’s festive calendars, they are things we enjoy putting on,” Muderack told BBC Radio Wales.

“The impact in itself is significant, the impact on the back of the past two years – and particularly the last eight weeks – truly is potentially catastrophic.”

Cardiff had requested permission from URC to postpone their match against the Scarlets to a time when spectators would be clear to attend again, but the competition organisers would not sanction that request.

Dai Young, who will be back in charge of Cardiff for the game after completing his mandatory isolation along with numerous other staff and players following their return from South Africa, understands the rationale behind the Welsh Government’s decision but is disappointed the match will be played in front of an empty stadium.

First and foremost, we all understand that the health and wellbeing of everyone in Wales is paramount,” Cardiff director of rugby Young said. “We all support that.

“But we have to be honest as well with how disappointing playing in front of no crowd is, especially over the festive period.

“What we would’ve like to have done is postpone it into a time in the schedule where supporters could attend the game.

“We looked at trying to postpone it and trying to get a date in the calendar but obviously we were knocked back on that.”

In Scotland, attendances at sporting events over Christmas have been limited to 500, but that option will not be taken up by Glasgow Warriors or Edinburgh for either leg of their festive 1872 Cup clashes in the URC.

The decision has been made to play the match “spectator-free” for the first leg at Scotstoun on December 27 and the return fixture at Murrayfield on January 2, with the Warriors due to make a decision on their home match against Ospreys on January 8 in due course.

“We understand that this will come as a disappointment to many, as our fixtures with Edinburgh are always amongst those greeted with the highest anticipation by all associated with the club,” Glasgow managing director Al Kellock said in a club statement.

“However, the health and wellbeing of everyone across the country is paramount.

“In the meantime, we look forward to welcoming you back to Scotstoun as soon as we are given the green light to do so.”

Warriors head coach Danny Wilson had hoped even a limited crowd would be able to attend for the encounter at Scotstoun, although was sympathetic to the decision taken by both clubs.

“As a head coach I’d want some people in if we are allowed, but I understand there’s a business side of this to be settled,” Wilson said. “There’s a cost to putting on games and that cost is met by full houses.”